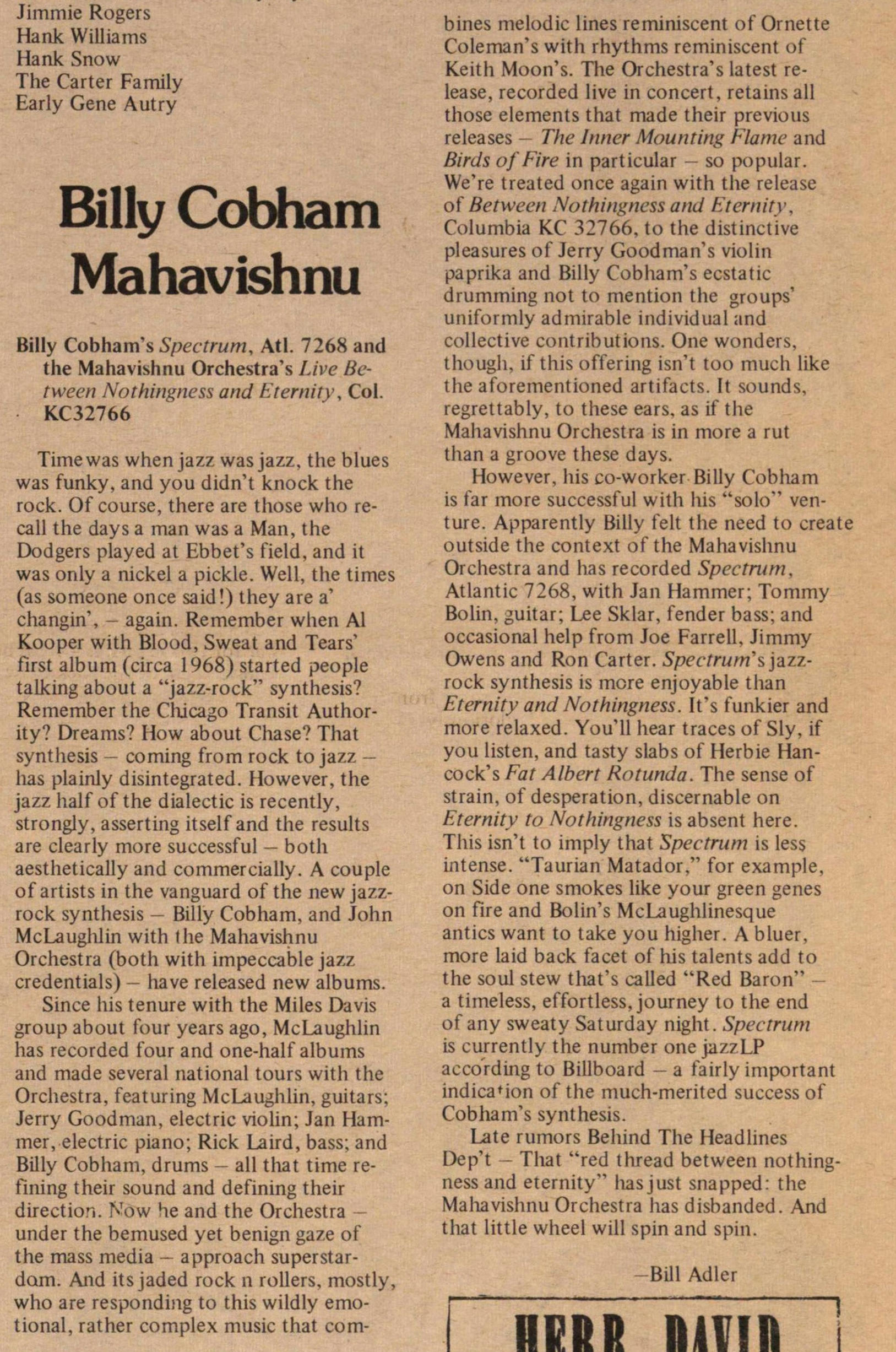 Time was when jazz was jazz, the blues was funky, and you didn't knock the rock. Of course, there are those who recall the days a man was a Man, the Dodgers played at Ebbet's field, and it was only a nickel a pickle. Well, the times (as someone once said!) they are a-changin' – again. Remember when Al Kooper with Blood, Sweat and Tears' first album (circa 1968) started people talking about a "jazz-rock" synthesis? Remember the Chicago Transit Authority? Dreams? How about Chase? That synthesis – coming from rock to jazz – has plainly disintegrated. However, the jazz half of the dialectic is recently, strongly, asserting itself and the results are clearly more successful – both aesthetically and commercially. A couple of artists in the vanguard of the new jazz-rock synthesis – Billy Cobham, and John McLaughlin with the Mahavishnu Orchestra (both with impeccable jazz credentials) – have released new albums.

Since his tenure with the Miles Davis group about four years ago, McLaughlin has recorded four and one-half albums and made several national tours with the Orchestra, featuring McLaughlin, guitars; Jerry Goodman, electric violin; Jan Hammer, electric piano; Rick Laird, bass; and Billy Cobham, drums – all that time refining their sound and defining their direction. Now he and the Orchestra – under the bemused yet benign gaze of the mass media – approach superstardom. And it's jaded rock 'n rollers, mostly, who are responding to this wildly emotional, rather complex music that combines melodic lines reminiscent of Ornette Coleman's with rhythms reminiscent of Keith Moon's. The Orchestra's latest release, recorded live in concert, retains all those elements that made their previous releases – The Inner Mounting Flame and Birds of Fire in particular – so popular. We're treated once again with the release of Between Nothingness and Eternity, Columbia KC 32766, to the distinctive pleasures of Jerry Goodman's violin paprika and Billy Cobham's ecstatic drumming, not to mention the groups' uniformly admirable individual and collective contributions. One wonders, though, if this offering isn't too much like the aforementioned artifacts. It sounds, regrettably, to these ears, as if the Mahavishnu Orchestra is in more a rut than a groove these days.

However, his co-worker Billy Cobham is far more successful with his "solo" venture. Apparently Billy felt the need to create outside the context of the Mahavishnu Orchestra and has recorded Spectrum, Atlantic 7268, with Jan Hammer; Tommy Bolin, guitar; Lee Sklar, fender bass; and occasional help from Joe Farrell, Jimmy Owens and Ron Carter. Spectrum's jazz-rock synthesis is more enjoyable than Eternity and Nothingness. It's funkier and more relaxed. You'll hear traces of Sly, if you listen, and tasty slabs of Herbie Hancock' s Fat Albert Rotunda. The sense of strain, of desperation, discernible on Eternity to Nothingness is absent here. This isn't to imply that Spectrum is less intense. "Taurian Matador," for example, on Side One smokes like your green genes on fire, and Bolin's McLaughlinesque antics want to take you higher. A bluer, more laid back facet of his talents add to the soul stew that's called "Red Baron" – a timeless, effortless journey to the end of any sweaty Saturday night. Spectrum is currently the number one jazz LP according to Billboard – a fairly important indication of the much-merited success of Cobham's synthesis.

Late rumors Behind The Headlines Dep't – that "red thread between nothingness and eternity" has just snapped; the Mahavishnu Orchestra has disbanded. And that little wheel will spin and spin.