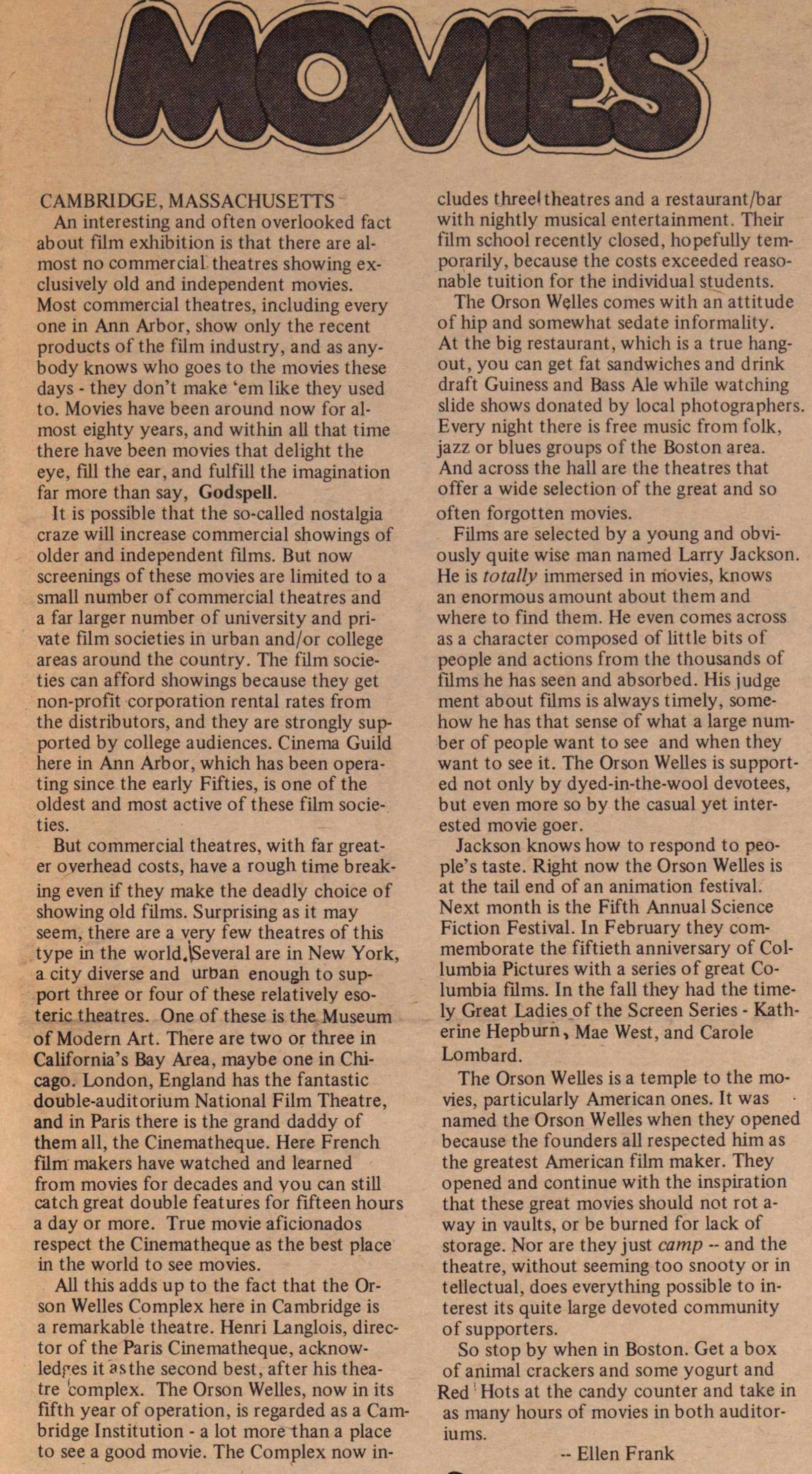 An interesting and often overlooked fact about film exhibition is that there are almost no commercial theatres showing exclusively old and independent movies. Most commercial theatres, including every one in Ann Arbor, show only the recent products of the film industry, and as anybody knows who goes to the movies these days - they don't make 'em like they used to. Movies have been around now for almost eighty years, and within all that time there have been movies that delight the eye, fill the ear, and fulfill the imagination far more than say, Godspell.

It is possible that the so-called nostalgia craze will increase commercial showings of older and independent films. But now screenings of these movies are limited to a small number of commercial theatres and a far larger number of university and private film societies in urban and/or college areas around the country. The film societies can afford showings because they get non-profit corporation rental rates from the distributors, and they are strongly supported by college audiences. Cinema Guild here in Ann Arbor, which has been operating since the early Fifties, is one of the oldest and most active of these film societies.

But commercial theatres, with far greater overhead costs, have a rough time breaking even if they make the deadly choice of showing old films. Surprising as it may seem, there are a very few theatres of this type in the world. Several are in New York, a city diverse and urban enough to support three or four of these relatively esoteric theatres. One of these is the Museum of Modern Art. There are two or three in California's Bay Area, maybe one in Chicago. London, England has the fantastic double-auditorium National Film Theatre, and in Paris there is the grand daddy of them all, the Cinematheque. Here French film makers have watched and learned from movies for decades and you can still catch great double features for fifteen hours a day or more. True movie aficionados respect the Cinematheque as the best place in the world to see movies.

All this adds up to the fact that the Orson Welles Complex here in Cambridge is a remarkable theatre. Henri Langlois, director of the Paris Cinematheque, acknowledges it as the second best, after his theatre complex. The Orson Welles, now in its fifth year of operation, is regarded as a Cambridge Institution - a lot more than a place to see a good movie. The Complex now includes three theatres and a restaurant/bar with nightly musical entertainment. Their film school recently closed, hopefully temporarily, because the costs exceeded reasonable tuition for the individual students.

The Orson Welles comes with an attitude of hip and somewhat sedate informality. At the big restaurant, which is a true hangout, you can get fat sandwiches and drink draft Guinness and Bass Ale while watching slide shows donated by local photographers. Every night there is free music from folk, jazz or blues groups of the Boston area. And across the hall are the theatres that offer a wide selection of the great and so often forgotten movies.

Films are selected by a young and obviously quite wise man named Larry Jackson. He is totally immersed in movies, knows an enormous amount about them and where to find them. He even comes across as a character composed of little bits of people and actions from the thousands of films he has seen and absorbed. His judgement about films is always timely, somehow he has that sense of what a large number of people want to see and when they want to see it. The Orson Welles is supported not only by dyed-in-the-wool devotees, but even more so by the casual yet interested movie goer.

Jackson knows how to respond to people's taste. Right now the Orson Welles is at the tail end of an animation festival. Next month is the Fifth Annual Science Fiction Festival. In February they commemborate the fiftieth anniversary of Columbia Pictures with a series of great Columbia films. In the fall they had the timely Great Ladies of the Screen Series - Katherine Hepburn, Mae West, and Carole Lombard.

The Orson Welles is a temple to the movies, particularly American ones. It was named the Orson Welles when they opened because the founders all respected him as the greatest American film maker. They opened and continue with the inspiration that these great movies should not rot away in vaults, or be burned for lack of storage. Nor are they just camp - and the theatre, without seeming too snooty or in tellectual, does everything possible to interest its quite large devoted community of supporters.

So stop by when in Boston. Get a box of animal crackers and some yogurt and Red ' Hots at the candy counter and take in as many hours of movies in both auditoriums.