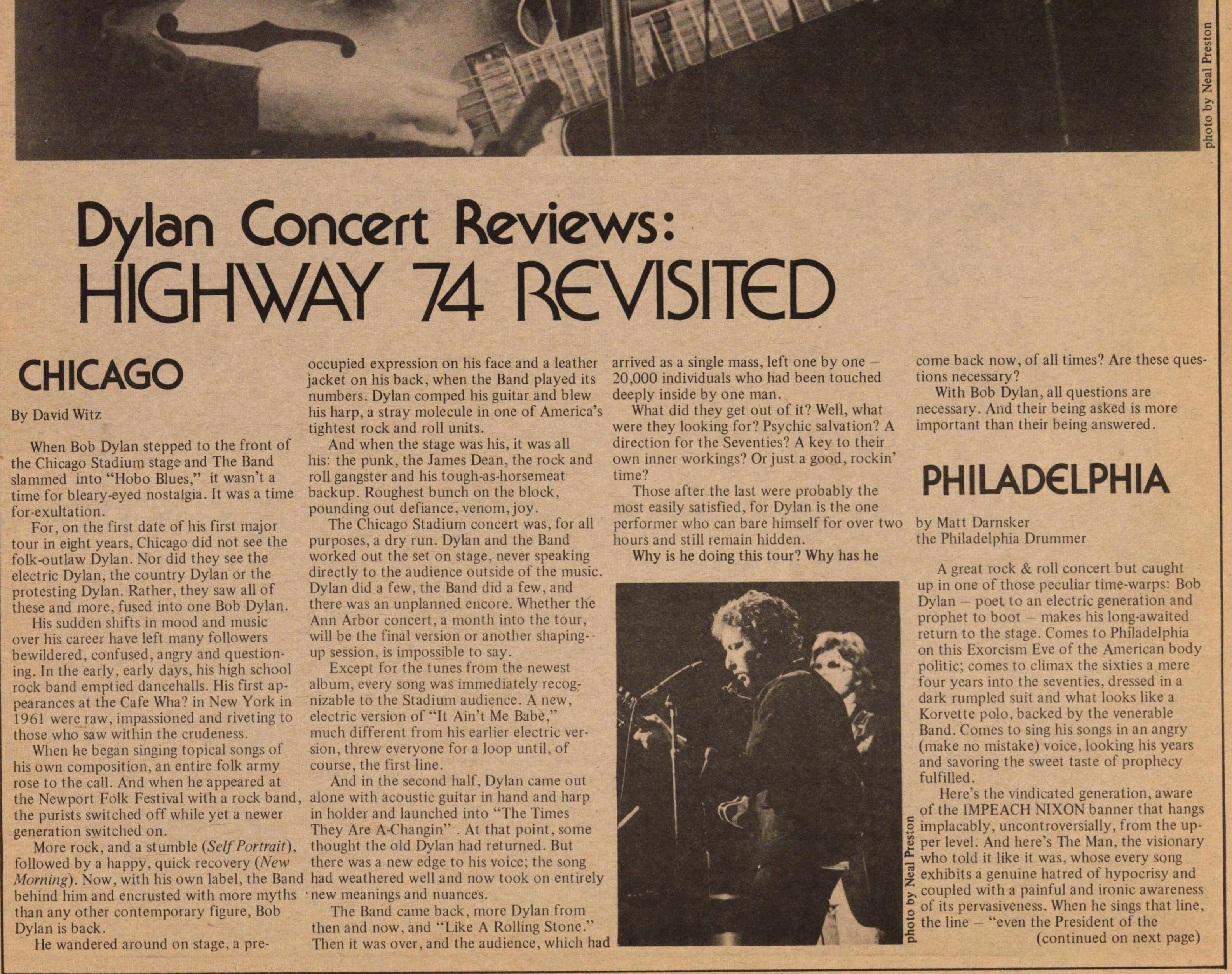 When Bob Dylan stepped to the front of the Chicago Stadium stage and The Band slammed into "Hobo Blues," it wasn't a time for bleary-eyed nostalgia. It was a time for-exultation. For, on the first date of his first major tour in eight years, Chicago did not see the folk -outlaw Dylan. Nor did they see the electric Dylan, the country Dylan or the protesting Dylan. Rather, they saw all of these and more, fused into one Bob Dylan. His sudden shifts in mood and music over his career have left many followers bewildered, confused, angry and questioning. In the early, early days, his high school rock band emptied dancehalls. His first appearances at the Cafe Wha? in New York in 1961 were raw, impassioned and riveting to those who saw within the crudeness. When he began singing topical songs of his own composition, au entire folk army rose to the cali. And when he appeared at the Newport Folk Festival with a rock band, the purists switched off while yet a newer generation switched on. More rock, and a stumble (SelfPortrait), followed by a happy, quick recovery (New Morning). Now, with his own label, the Band behind him and encrusted with more myths tlian any other contemporary figure, Bob Dylan is back. He wandered around on stage, a occupied expression on his face and a leather jacket on his back, when the Band played its numbers. Dylan comped his guitar and blew his harp, a stray molecule in one of America's tightest rock and roll units. And when the stage was his, it was all his: the punk, the James Dean, the rock and roll gangster and his tough-as-horsemeat backup. Roughest bunch on the block, pounding out defiance, venomjoy. The Chicago Stadium concert was, for all purposes, a dry run. Dylan and the Band worked out the set on stage, never speaking directly to the audience outside of the music. Dylan did a few, the Band did a few, and there was an unplanned encoré. Whether the Ann Arbor concert, a month into the tour, will be the final versión or another shapingup session, is impossible to say. Except for the tunes from the newest album, every song was immediately recogiiiable to the Stadium audience. A new, electric version of "It Ain't Me Babe," much different from his earlier electric version, threw everyone for a loop until, of course, the first line. And in the second half, Dylan came out alone with acoustic guitar in hand and harp in holder and launched into "The Times They Are A-Changin" . At that point, some thought the old Dylan liad returned. But there was a new edge to his voice; the song liad weathered well and now took on entirely new meaningsand nuances. The Band came back, more Dylan from then and now, and "Like A Rolling Stone." Tlien it was over, and the audience, which had arrived as a single mass, left one by one - 20,000 individuals who had been touched deeply inside by one man. What did they get out of it? Well, what were they looking for? Psychic salvation? A direction for the Seventies? A key to their own inner workings? Or just a good, rockin' time? Those after the last were probably the most easily satisfied, for Dylan is the one performer who can bare himself for over two liours and still remain hidden. Why is he doing this tour? Why has he come back now, of all times? Are these questions necessary? Witli Bob Dylan, all questions are necessary. And their being asked is more important than their being answered.