Looking Back ...dylan In Retrospect 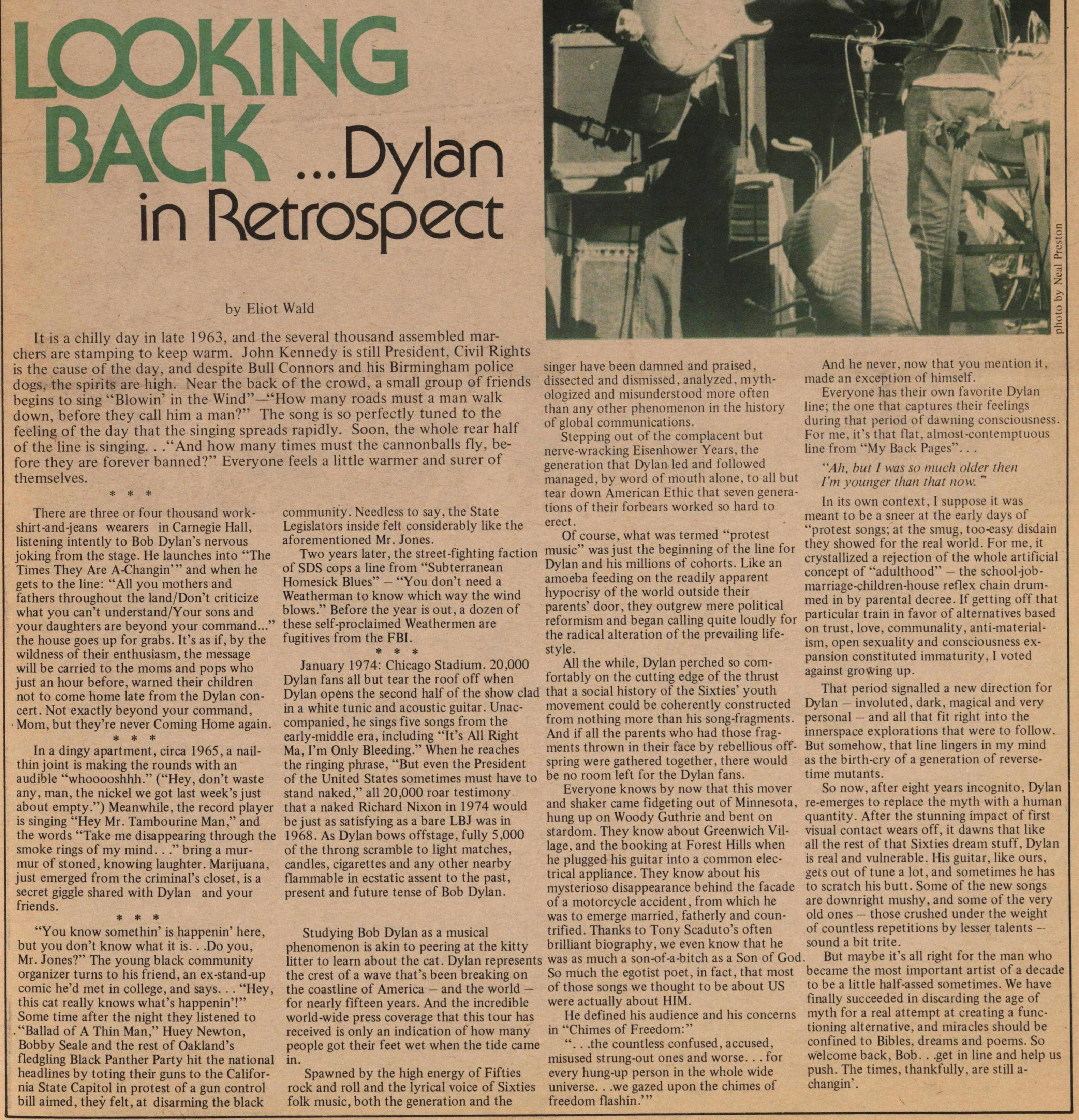 It is a chilly day in late 1963, and the several thousand assembled marchers are stamping to keep warm. John Kennedy is still President, Civil Rights is the cause of the day, and despite Bull Connors and his Birmingham police dogs, the spirits are high. Near the back of the crowd, a small group of friends begins to sing "Blowin' in the Wind"- "How many roads must a man walk down, before they call him a man?" The song is so perfectly tuned to the feeling of the day that the singing spreads rapidly. Soon, the whole rear half of the line is singing. . ."And how many times must the cannonballs fly, before they are forever banned?" Everyone feels a little warmer and surer of themselves.

There are three or four thousand work-shirt-and-jeans wearers in Carnegie Hall, listening intently to Bob Dylan's nervous joking from the stage. He launches into "The Times They Are A-Changin' " and when he gets to the line: "All you mothers and fathers throughout the land/Don't criticize what you can't understand/Your sons and your daughters are beyond your command..." the house goes up for grabs. It's as if, by the wildness of their enthusiasm, the message will be carried to the moms and pops who just an hour before, warned their children not to come home late from the Dylan concert. Not exactly beyond your command,  Mom, but they're never Coming Home again.

In a dingy apartment, circa 1965, a nail thin joint is making the rounds with an audible "whooooshhh." ("Hey, don't waste any, man, the nickel we got last week's just about empty.") Meanwhile, the record player is singing "Hey Mr. Tambourine Man," and the words "Take me disappearing through the smoke rings of my mind. . ." bring a murmur of stoned, knowing laughter. Marijuana, just emerged from the criminal's closet, is a secret giggle shared with Dylan and your friends.

"You know somethin' is happenin' here, but you don't know what it is. . .Do you, Mr. Jones?" The young black community organizer turns to his friend, an ex-stand -up comic he'd met in college, and says. . . "Hey, this cat really knows what's happenin'!" Some time after the night they listened to ."Ballad of A Thin Man," Huey Newton, Bobby Seale and the rest of Oakland's fledgling Black Panther Party hit the national headlines by toting their guns to the California State Capitol in protest of a gun control bill aimed, they felt, at disarming the black community. Needless to say, the State Legislators inside felt considerably like the aforementioned Mr. Jones.

Two years later, the street-fighting faction of SDS cops a line from "Subterranean Homesick Blues" - "You don't need a Weatherman to know which way the wind blows." Before the year is out, a dozen of these self-proclaimed Weathermen are fugitives from the FBI.

January 1974: Chicago Stadium. 20,000 Dylan fans all but tear the roof off when Dylan opens the second half of the show clad in a white tunic and acoustic guitar. Unaccompanied, he sings five songs from the early-middle era, including "It's All Right Ma, I'm Only Bleeding." When he reaches the ringing phrase, "But even the President of the United States sometimes must have to stand naked," all 20,000 roar testimony that a naked Richard Nixon in 1974 would be just as satisfying as a bare LBJ was in 1968 . As Dylan bows offstage, fully 5 ,000 of the throng scramble to light matches, candles, cigarettes and any other nearby flammable in ecstatic assent to the past, present and future tense of Bob Dylan.

Studying Bob Dylan as a musical phenomenon is akin to peering at the kitty litter to learn about the cat. Dylan represents the crest of a wave that's been breaking on the coastline of America - and the world - for nearly fifteen years. And the incredible world-wide press coverage that this tour has received is only an indication of how many people got their feet wet when the tide came in.

Spawned by the high energy of Fifties rock and roll and the lyrical voice of Sixties folk music, both the generation and the singer have been damned and praised, dissected and dismissed, analyzed, mythologized and misunderstood more often than any other phenomenon in the history of global Communications.

Stepping out of the complacent but nerve-wracking Eisenhower Years, the generation that Dylan led and followed managed, by word of mouth alone, to all but tear down American Ethic that seven generations of their forbears worked so hard to erect.

Of course, what was termed "protest music" was just the beginning of the line for Dylan and his millions of cohorts. Like an amoeba feeding on the readily apparent hypocrisy of the world outside their parents' door, they outgrew mere political reformism and began calling quite loudly for the radical alteration of the prevailing lifestyle.

All the while, Dylan perched so comfortably on the cutting edge of the thrust that a social history of the Sixties' youth movement could be coherently constructed from nothing more than his song-fragments. And if all the parents who had those fragments thrown in their face by rebellious offspring were gathered together, there would be no room left for the Dylan fans.

Everyone knows by now that this mover and shaker carne fidgeting out of Minnesota, hung up on Woody Guthrie and bent on stardom. They know about Greenwich Village, and the booking at Forest Hills when he plugged his guitar into a common electrical appliance. They know about his mysterious disappearance behind the facade of a motorcycle accident, from which he was to emerge married, fatherly and countrified. Thanks to Tony Scaduto's often brilliant biography, we even know that he was as much a son-of-a-bitch as a Son of God So much the egotist poet, in fact, that most of those songs we thought to be about US were actually about HIM.

He defined his audience and his concerns in "Chimes of Freedom:" ". . .the countless confused, accused, misused strung-out ones and worse. . . for every hung-up person in the whole wide universe. . .we gazed upon the chimes of freedom flashin.'"

And he never. now that you mention it, made an exception of himself.

Everyone has their own favorite Dylan line; the one that captures their feelings during that period of dawning consciousness. For me, it's that flat, almost-contemptuous line from "My Back Pages". . .

"Ah, but I was so much older then I'm younger than that now."

In its own context, I suppose it was meant to be a sneer at the early days of "protest songs; at the smug, too-easy disdain they showed for the real world. For me, it crystallized a rejection of the whole artificial concept of "adulthood" -- the school-job-marriage-children-house reflex chain drummed in by parental decree. If getting off that particular train in favor of alternatives based on trust, love, communality, anti-materialism, open sexuality and consciousness expansion constituted immaturity, I voted against growing up.

That period signaled a new direction for Dylan - involuted, dark, magical and very personal - and all that fit right into the inner space explorations that were to follow. But somehow, that line lingers in my mind as the birth-cry of a generation of reverse time mutants.

So now, after eight years incognito, Dylan re-emerges to replace the myth with a human quantity. After the stunning impact of first visual contact wears off, it dawns that like all the rest of that Sixties dream stuff, Dylan is real and vulnerable. His guitar, like ours, gets out of tune a lot, and sometimes he has to scratch his butt. Some of the new songs are downright mushy, and some of the very old ones - those crushed under the weight of countless repetitions by lesser talents - sound a bit trite.

But maybe it's all right for the man who became the most important artist of a decade to be a little half-assed sometimes. We have finally succeeded in discarding the age of myth for a real attempt at creating a functioning alternative, and miracles should be confined to Bibles, dreams and poems. So welcome back, Bob. . .get in line and help us push. The times, thankfully, are still achangin'.