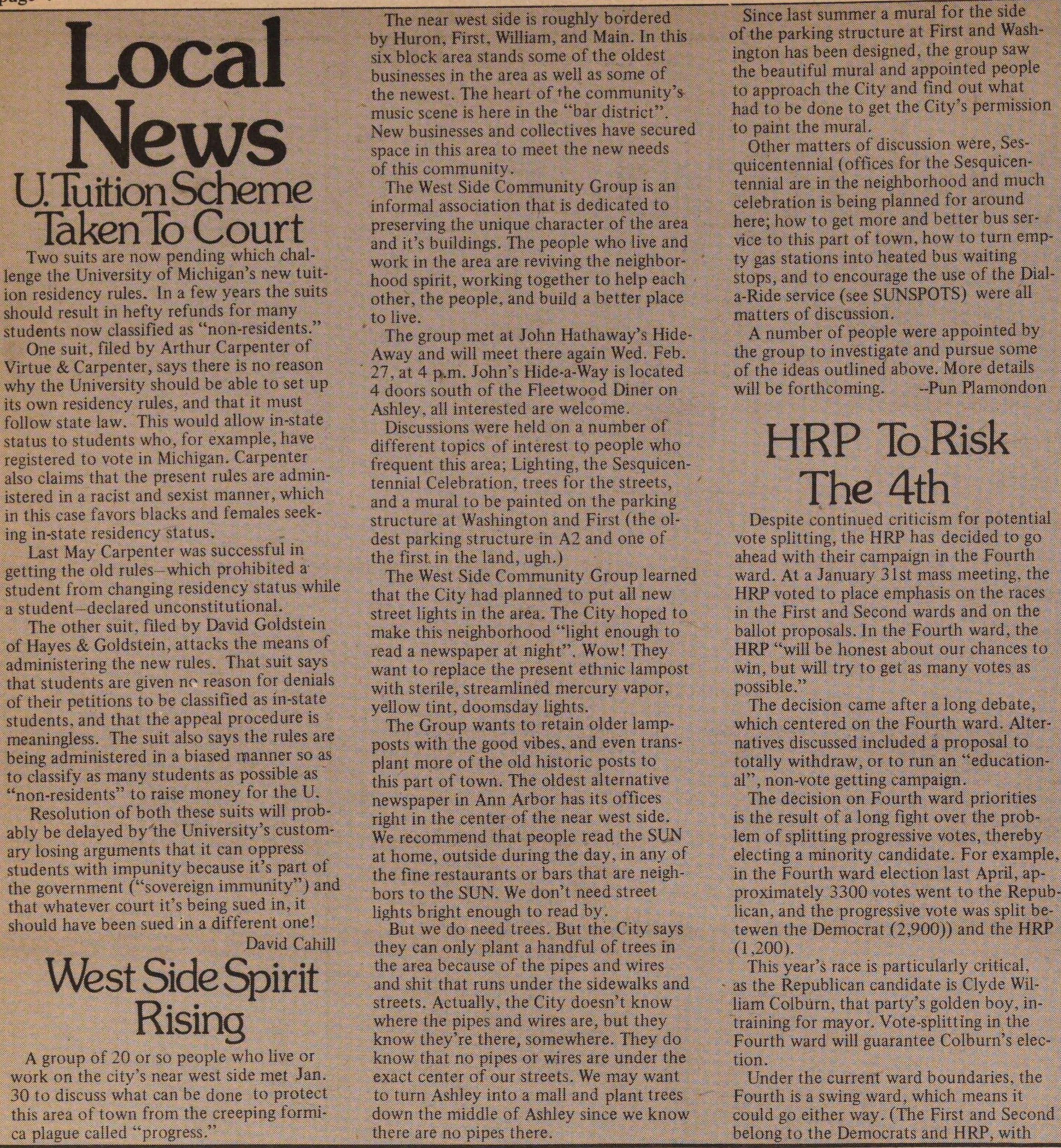 A group of 20 or so people who live or work on the city's near west side met Jan. 30 to discuss what can be done to protect this area of town from the creeping formica plague called "progress." The near west side is roughly bo'rdered by Huron, First, William, and Main. In this six block area stands some of the oldest businesses in the area as well as some of the newest. The heart of the community's music scène is here in the "bar district". New businesses and collectives have secured space in this area to meet the new needs of this community. The West Side Community Group is an informal association that is dedicated to preserving the unique character of the area and it's buildings. The people who live and work in the area are reviving the neighborhood spirit, working together to help each other, the people, and buiJd a better place to live. The group met at John Hathaway's HideAway and will meet there again Wed. Feb. ' 27, at 4 r.m. John's Hide-a-Way is located 4 doors south of the FJeetwood Diner on Ashley, all interested are welcome. Discussions were held on a number of different topics of interest to people who frequent this area; Lighting, the Sesquicentennial Celebration, trees for the streets, and a mural to be painted on the parking structure at Washington and First (the oldest parking structure in A2 and one of the first in the land, ugh.) The West Side Community Group learned that the City had planned to put all new street lights in the area. The City hoped to make this neighborhood "light enough to read a newspaper at night". Wow! They want to replace the present ethnic lampost with sterile, streamlined mercury vapor, yellow tint, doomsday lights. The Group wants to retain older lampposts with the good vibes, and even transplant more of the old historie posts to this part of town. The oldest alternative newspaper in Ann Arbor has its offices right in the center of the near west side. We recommend that people read the SUN at home, outside during the day, in any of the fine restaurants or bars that are neiglibors to the SUN. We don't need street lights bright enough to read by. But we do need trees. But the City says they can only plant a handful of trees in the area because of the pipes and wires and shit that runs under the sidewalks and streets. Actually, the City doesn't know where the pipes and wires are, but they know they're there, somewhere. They do know that no pipes or wires are under the exact center of our streets. We may want to turn Ashley into a mail and plant trees down the middle of Ashley since we know there are no pipes there. Since last summer a mural for the side of the parking structure at First and Washington has been designed, the group saw the beautiful mural and appointed people to approach the City and find out what had to be done to get the City's permission to paint the mural. Other matters of discussion were, Sesquicentennial (offices for the Sesquicentennial are in the neighborhood and much celebration is being planned for around here; how to get more and better bus service to this part of town, how to turn empty gas stations into heated bus waiting stops, and to encourage the use of the Diala-Ride service (see SÜNSPOTS) were all matters of discussion. A number of people were appointed by the group to investígate and pursue some of the ideas outlined above. More details will be forthcoming.