Hrp To Risk The 4th 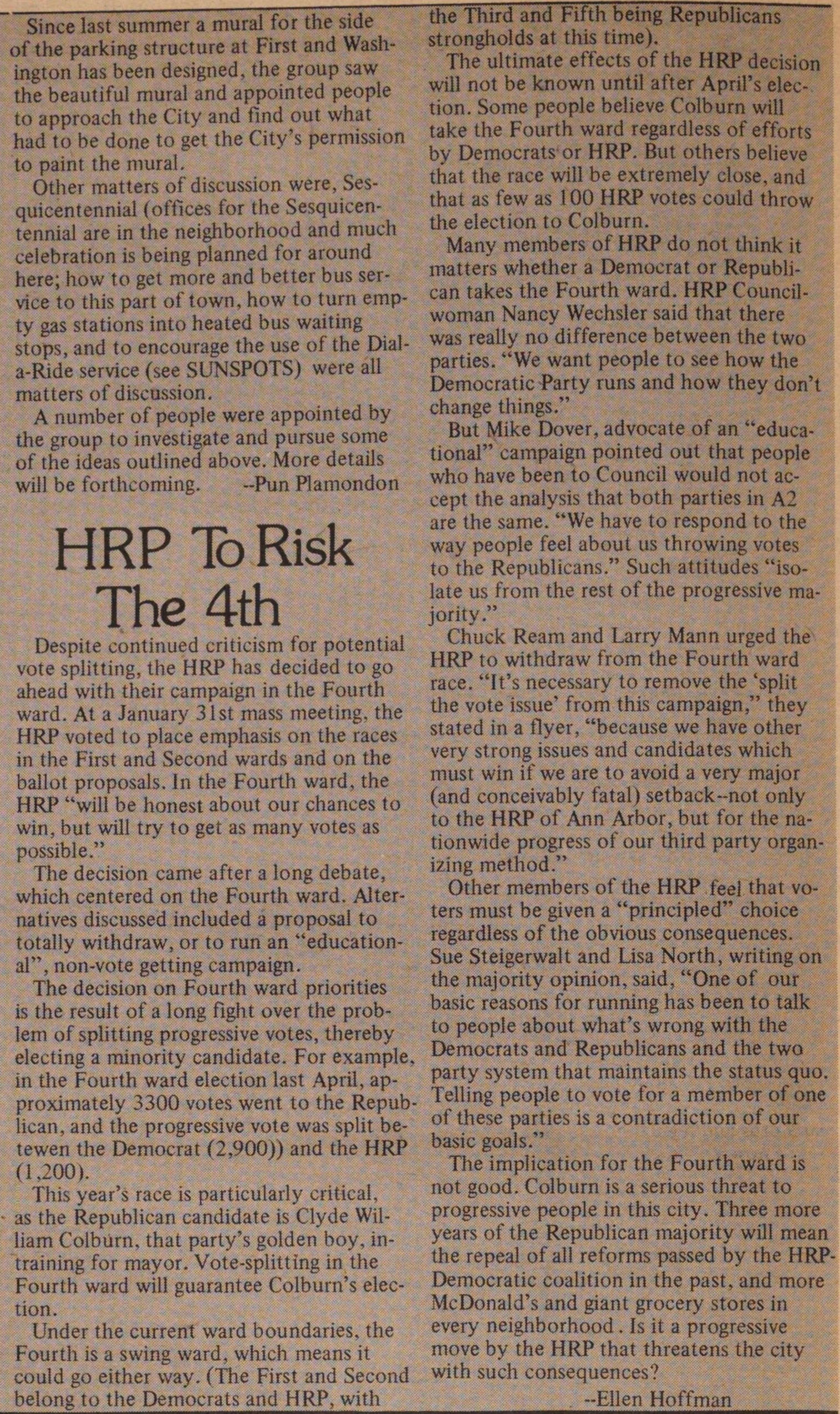 Despite eontinued cnticism for potentiai vote splitting, the HRP has decided to go ahead with their campaign in the Fourth ward. At a January 31st mass meeting, the HRP voted to place emphasis on the races in the First and Second wards and on the ballot proposals. In the Fourth ward, the HRP "will be honest about our chances to win, but will try to get as many votes as possible." The decisión carne after a long debate, which centered on the Fourth ward. Alternatives discussed included a proposal to totally withdraw, or to run an "educational", non-vote getting campaign. The decisión on Fourth ward priorities is the result of a long fight over the problem of splitting progressive votes, thereby electing a minority candidate. For example, in the Fourth ward election last April, approximately 3300 votes went to the Republican, and the progressive vote was split betewen the Democrat (2,900)) and the HRP (1,200). This year's race is particularly critical, ■ as the Republican candidate is Clyde William Colbürn. that party's golden boy, intraining for mayor. Vote-splitting in the Fourth ward will guarantee Colburn's election. Under the current ward boundaries, the Fourth is a swing ward, which means it could go either way. (The First and Second belong to the Democrats and HRP, with the Third and Fifth being Republicans strongholds at this time). The ultímate effects of the HRP decisión will not be known until after Aprü's election. Some people believe Colburn will take the Fourth ward regardless of efforts by Democrats or HRP. But others believe that the race will be extremely close, and that as few as 100 HRP votes could throw the election to Colburn. Many members of HRP do not think it matters whether a Democrat or Republican takes the Fourth ward. HRP Councilwoman Nancy Wechsler said that there was really no difference between the two parties. "We want people to see how the Democratie Party runs and how they don't change things." But Mike Dover, advocate of an "educational" campaign pointed out that people who have been to Council would not accept the analysis that both parties in A2 are the same. "We have to respond to the way people feel about us throwing votes to the Republicans." Such attitudes "isolate us from the rest of the progressive rnajority." Chuck Ream and Larry Mann urged the HRP to withdraw from the Fourth ward race. "It's necessary to remove the 'split the vote issue' from this campaign," they stated in a flyer, "because we have other very strong issues and candidates which must win if we are to avoid a very major (and conceivably fatal) setback-not only to the HRP of Ann Arbor, but for the nationwide progress of our third party organizing method." Other members of the HRP .fee] that voters must be given a "principled" choice regardless of the obvious consequences. Sue Steigerwalt and Lisa North, writing on the majority opinión, said, "One of our basic reasons for running has been to talk to people about what's wrong with the Democrats and Republicans and the two party system that maintains the status quo. Telling people to vote for a member of one of these parties is a contradiction of our basic goals." The implication for the Fourth ward is not good. Colburn is a serious threat to progressive people in this city. Three more years of the Republican majority will mean the repeal of all reforms passed by the HRPDemocratic coalition in the past, and more McDonald's and giant grocery stores in every neighborhood . Is it a progressive move by the HRP that threatens the city with such consequences?