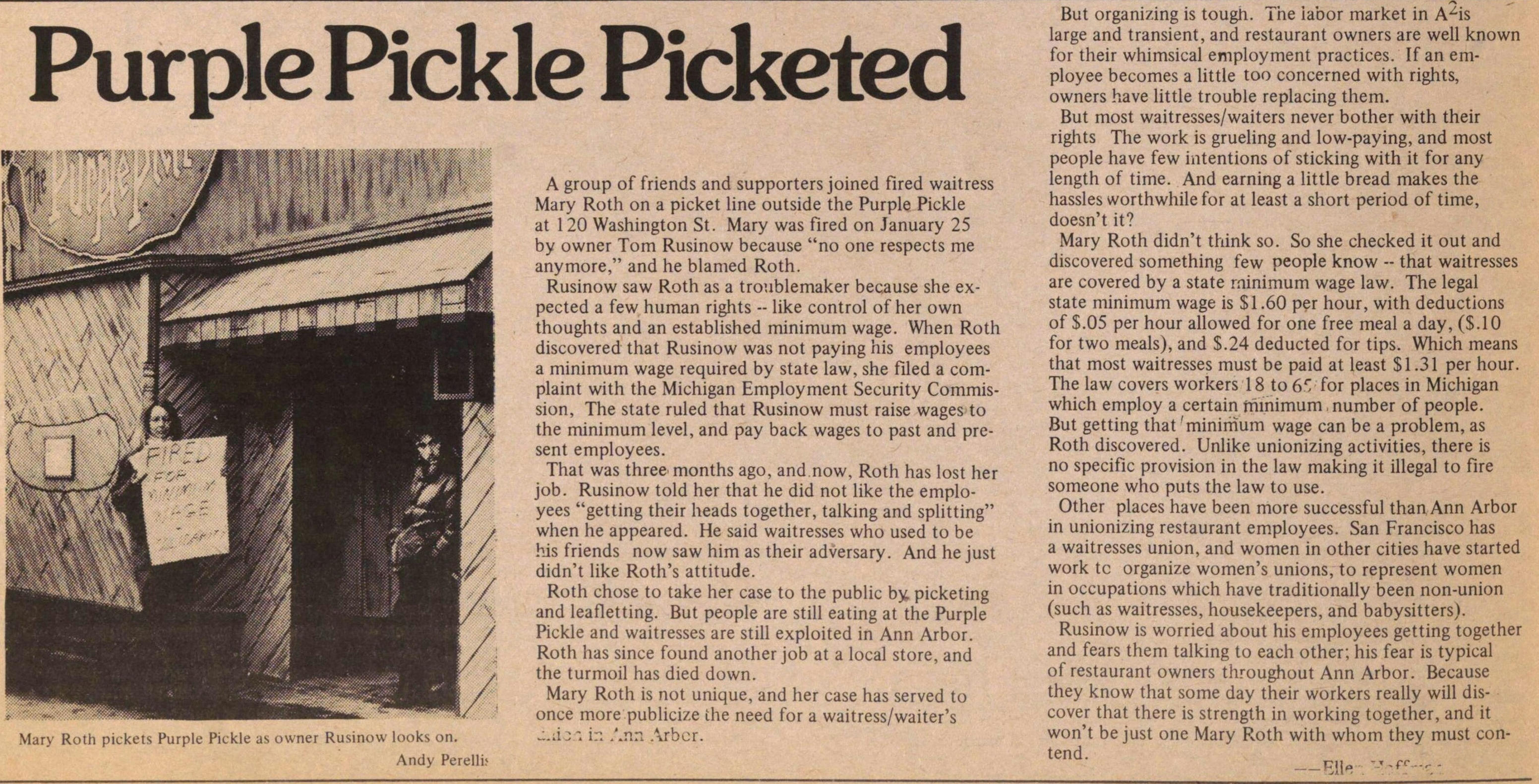 A group of friends and supporters joined fired waitress Mary Roth on a picket line outside the Purple Pickle at 1 20 Washington St. Mary was fired on January 25 by owner Torn Rusinow because "no one respects me anymore," and he blamed Roth. Rusinow saw Roth as a troublemaker because she expected a few human rights -- like control of her own thoughts and an established minimum wage. When Roth discovered that Rusinow was not paying nis employees a minimum wage required by state law, she filed a complaint with the Michigan Employment Security Commission, The state ruled that Rusinow must raise wages to the minimum level, and pay back wages to past and present employees. That was three months ago, and now, Roth has lost her job. Rusinow told her that he did not like the employees "getting their heads together, talking and splitting" when he appeared. He said waitresses who used to be his friends now saw him as their adversary. And he just didn't like Roth's attitude. Roth chose to take her case to the public by. picketing and leafletting. But people are still eating at the Purple Pickle and waitresses are still exploited in Ann Arbor. Roth has since found another job at a local store, and the turmoil has died down. Mary Roth is not unique, and her case has served to once more publicize the need for a waitresswaiter's .:..i ; ■. ir. .'.nn Arber. But organizing is tough. ihe abor market in Ais large and transient, and restaurant owners are well known for their whimsical employment practices. If an employee becomes a little too concerned with rights, owners have little trouble replacing them. But most waitresseswaiters never bother with their rights The work is grueling and low-paying, and most people have few intentions of sticking with it for any length of time. And earning a little bread makes the hassles worthwhile for at least a short period of time, doesn't it? Mary Roth didn't think so. So she checked it out and discovered something few people know -- that waitresses are covered by a state minimum wage law. The legal state minimum wage is $1.60 per hour, with deductions of $.05 per hour allowed for one free meal a day, ($.10 for two meals), and $.24 deducted for tips. Which means that most waitresses must be paid at least $1.31 per hour. The law covers workers 18 to 61 for places in Michigan which employ a certain rrrinimum , number of people. But getting that 'minimum wage can be a problem, as Roth discovered. Unlike unionizing activities, there is no specific provisión in the law making it illegal to fire someone who puts the law to use. Other places have been more successful than Ann Arbor in unionizing restaurant employees. San Francisco has a waitresses unión, and women in other cities have started work te organize women's unions, to represent women in occupations which have traditionally been non-union (such as waitresses, housekeepers, and babysitters). Rusinow is worried about his employees getting together and fears them talking to each other; his fear is typical of restaurant owners throughout Ann Arbor. Because they know that some day their workers really will discover that there is strength in working together, and it won't be just one Mary Roth with whom they must tend.