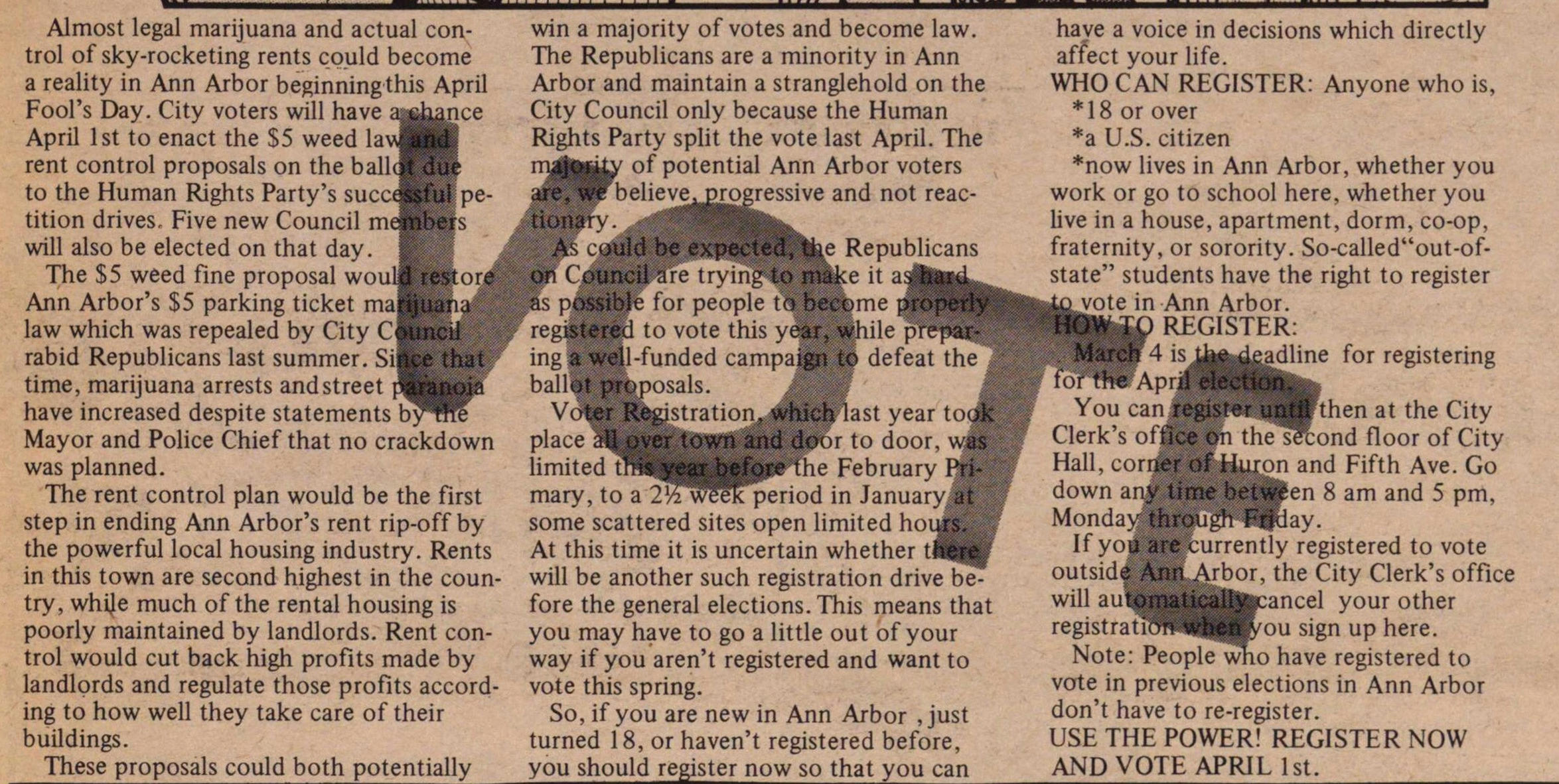 Almost legal marijuana and actual control of sky-rocketing rents could become a reality in Ann Arbor beginningthis April Fool's Day. City voters will have alance Aoril lst to enact the S5 weed lavüH í xt ' I 11 1 u IV V11UVL L11V f J W WU Id rent control proposals on the bal] to the Human Rights Party's succ tition drives, Five new Council m will also be elected on that day. The $5 weed fine proposal wou Ann Arbor's $5 parking ticket m; law which was repealed by City C rabid Republicans last summer. S time, marijuana arrests andstreet have increased despite statements Mayor and Pólice Chief that no c was planned. The rent control plan would be step in ending Ann Arbor's rent rip-off by the powerful local housing industry. Rents in this town are secand highest in the country, whije much of the rental housing is poorly maintained by landlords. Rent control would cut back high profits made by landlprds and regúlate those profits according to how well they take care of their buildings. These proposals could both potentially win a majority of votes and become law. The Republicans are a minority in Ann Axbor and maintain a stranglehold on the City Council only because the Human Rights Party split the vote last April. The some scattered sites open limited houxs. At this time it is uncertain whether imff will be another such registration drive before the general elections. This means that you may have to go a little out of your way if you aren't registered and want to vote this spring. So, if you are new in Ann Arbor , just turned 18, or haven't registered before, you should register now so that you can have a voice in decisions which directly affect your life. WHO CAN REGISTER: Anyone who is, 18 or over a U.S. citizen or, whether you re, whether you it, dorm, co-op, o-called"out-ofright to register ie for registering Fthen at the City ond floor of City id Fifth Ave. Go 8 am and 5 pm. Monday thïough Friday. If you are currently registered to vote outside Ann Arbor, the City Clerk's office will auH lltacancel your other registra tiOT[ Mou sign up here. Note: People who have registered to vote in previous elections in Ann Arbor don't have to re-register. USE THE POWER! REGISTER NOW AND VOTE APRIL lst.