The Nuclear Disaster Vs. The Solar Alternative 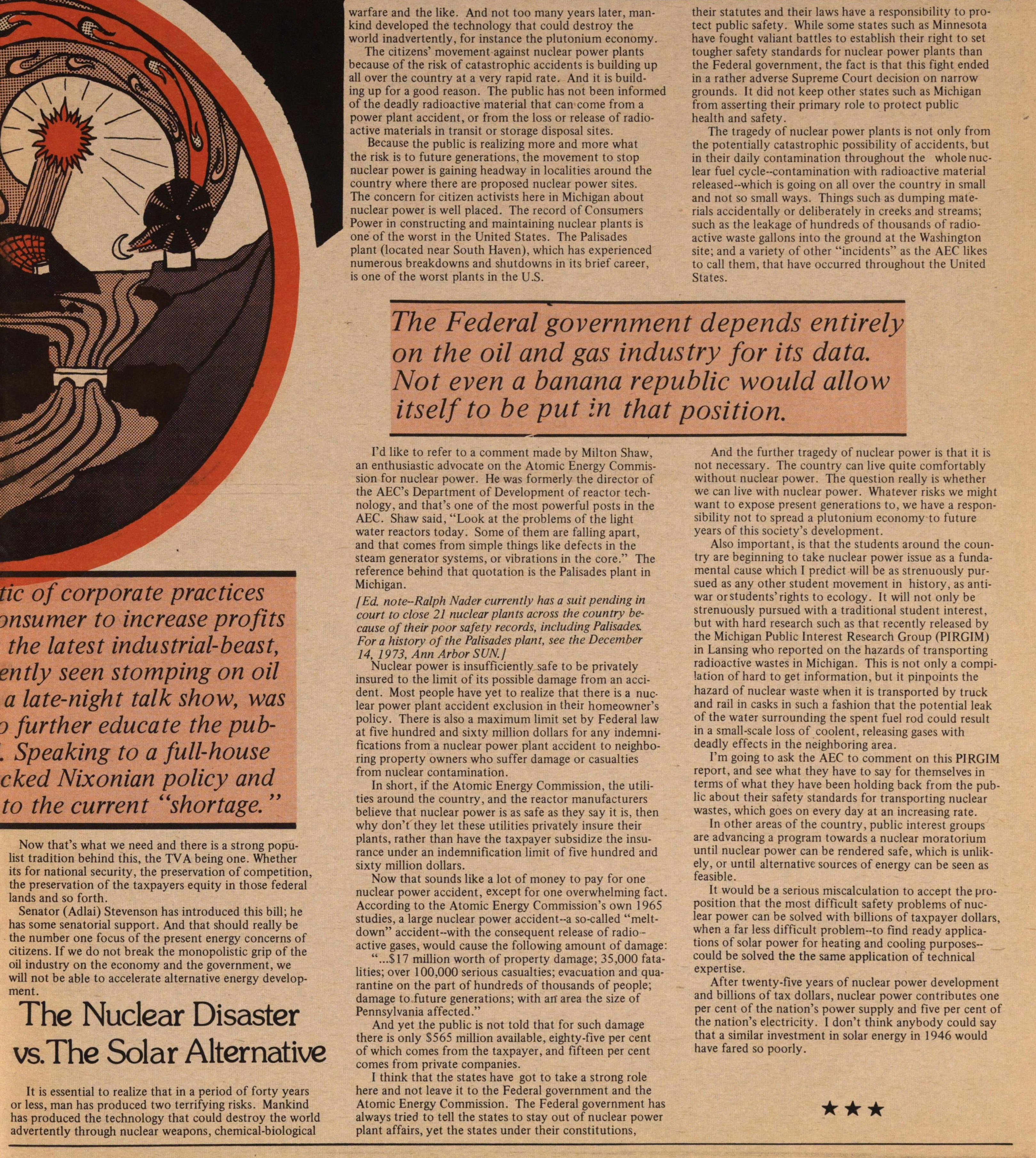 The Nuclear Disaster vs The Solar Alternative

It is essential to realize that in a period of forty years or less, man has produced two terrifying risks. Mankind has produced the technology that could advertently through nuclear weapons, chemical-biological warfare and the like. And not too many years later, mankind developed the technology that could destroy the world inadvertently, for instance the plutonium economy.

The citizens' movement against nuclear power plants because of the risk of catastrophic accidents is building up all over the country at a very rapid rate. And it is building for a good reason. The public has not been informed of the deadly radioactive material that can come from a power plant accident, or from the loss or release of radioactive materials in transit or storage disposal sites.

Because the public is realizing more and more what the risk is to future generations, the movement to stop nuclear power is gaining headway in localities around the country where there are proposed nuclear power sites. The concern for citizen activists here in Michigan about nuclear power is well placed. The record of Consumers Power in constructing and maintaining nuclear plants is one of the worst in the United States. The Palisades (located near South Haven), which has experienced numerous breakdowns and shutdowns in its brief career, is one of the worst plants the U.S.

I'd like to refer to a comment made by Milton Shaw, an enthusiastic advocate on the Atomic Energy Commission for nuclear power. He was formerly the director of the AEC's Department of Development of reactor technology, and that's one of the most powerful posts in the AEC. Shaw said, "Look at the problems of the light water reactors today. Some of them are falling apart, and that comes from simple things like defects in the steam generator system, or vibrations in the core." The reference behind that quotation is the Palisades plant in Michigan.

(Ed. note-Ralph Nader currently has a suit pending in court to close 21 nuclear plants across the country because of their poor safety records, including Palisades. For a history of the Palisades , plant, see the December 14, 1973, Ann Arbor SUN.)

Nuclear power is insufficiently safe to be privately insured to the limit of its possible damage from an accident. Most people have yet to realize that there is a nuclear power plant accident exclusion in their homeowner's policy. There is a maximum limit set by Federal law at five hundred and sixty million dollars for any indemnifications from a nuclear power plant accident to neighboring property owners who suffer damage or casualties from nuclear contamination.

In short, if the Atomic Energy Commission, the utilities around the country, and the reactor manufacturers believe that nuclear power is as safe as they say it is, then why don't they let these utilities privately insure their plants, rather than have the taxpayer subsidize the insurance under an indemnification limit of five hundred and sixty million dollars.

Now that sounds like a lot of money to pay for one nuclear power accident, except for one overwhelming fact. According to the Atomic Energy Commission's own 1965 studies, a large nuclear power accident-a so-called "melt-down accident"-with the consequent release of radioactive gases, would cause the following amount of damage;

"...$17 million worth of property damage; 35,000 fatalities; over 100,000 serious casualties; evacuation and quarantine on the part of hundreds of thousands of people; damage to future generations; with an area the size of Pennsylvania affected."

And yet the public is not told that for such damage there is only $565 million available, eighty-five percent of which comes from the taxpayer, and fifteen percent comes from private companies.

I think that the state have got to take a strong role here and not leave it to the Federal government and the Atomic Energy Commission. The Federal government has always tried to tell the states to stay out of nuclear power plant affairs, yet the states under their constitutions, their statutes and their laws have a responsibility to protect public safety. While some states such as Minnesota have fought valiant battles to establish their right to set tougher safety standards for nuclear power plants than the Federal government, the fact is that this fight ended in a rather adverse Supreme Court decision on narrow grounds. It did not keep other states such as Michigan from asserting their primary role to protect public health and safety.

The tragedy of nuclear power plants is not only the potentially catastrophic possibility of accidents, but in their daily contamination throughout the whole nuclear fuel cycle-contamination with radioactive material released-which is going on all over the country in small and not so small ways. Things such as dumping materials accidentally or deliberately in creeks and streams; such as the leakage of hundreds of thousands of radioactive waste gallons into the ground at the Washington site; and a variety of other "incidents" as the AEC like to call them, that have occurred throughout the United States.

And the further tragedy of nuclear power is that it is not necessary. The country can live quite comfortably without nuclear power. The question really is whether can live with nuclear power. Whatever risks we might want to expose present generations to, we have a responsibility not to spread a plutonium economy to future years of this society's development.

Also important, is that the students around the country are beginning to take nuclear power issue as a fundamental cause which I predict will be as strenuously pursued as any other student movement in history, as anti-war or student's rights to ecology. It will not only be strenuously pursued with a traditional student interest, but with hard research such as that recently released by the Michigan Public Interest Research Group (PIRGIM) in Lansing who reported on the hazards of transporting radioactive wastes in Michigan. This is not only a compilation of hard to get information, but it pinpoints the hazard of nuclear waste when it is transported by truck and rail in casks in such a fashion that the potential leak of the water surrounding the spent fuel rod could result in a small-scale loss of coolant, releasing gases with deadly effects in the neighboring area.

I'm going to ask the AEC to comment on this PIRGIM report, and see what they have to say for themselves in terms of what they have been holding back from the public about their safety standards for transporting nuclear wastes, which goes on every day at an increasing rate.

In other areas of the country public interest groups are advancing a program towards a nuclear moratorium until nuclear power can be rendered safe, which is unlikely, or until alternative sources of energy can be seen as feasible.

It would be a serious miscalculation to accept the proposition that the most difficult safety problems of nuclear power can be solved with billions of taxpayer dollars, when a far less difficult problem-to find ready applications of solar power for heating and cooling purposes could be solved the the same application of technical expertise.

The Federal government depends entirely on the oil and gas industry for its data. Not even a banana republic would allow itself to be put in that position.