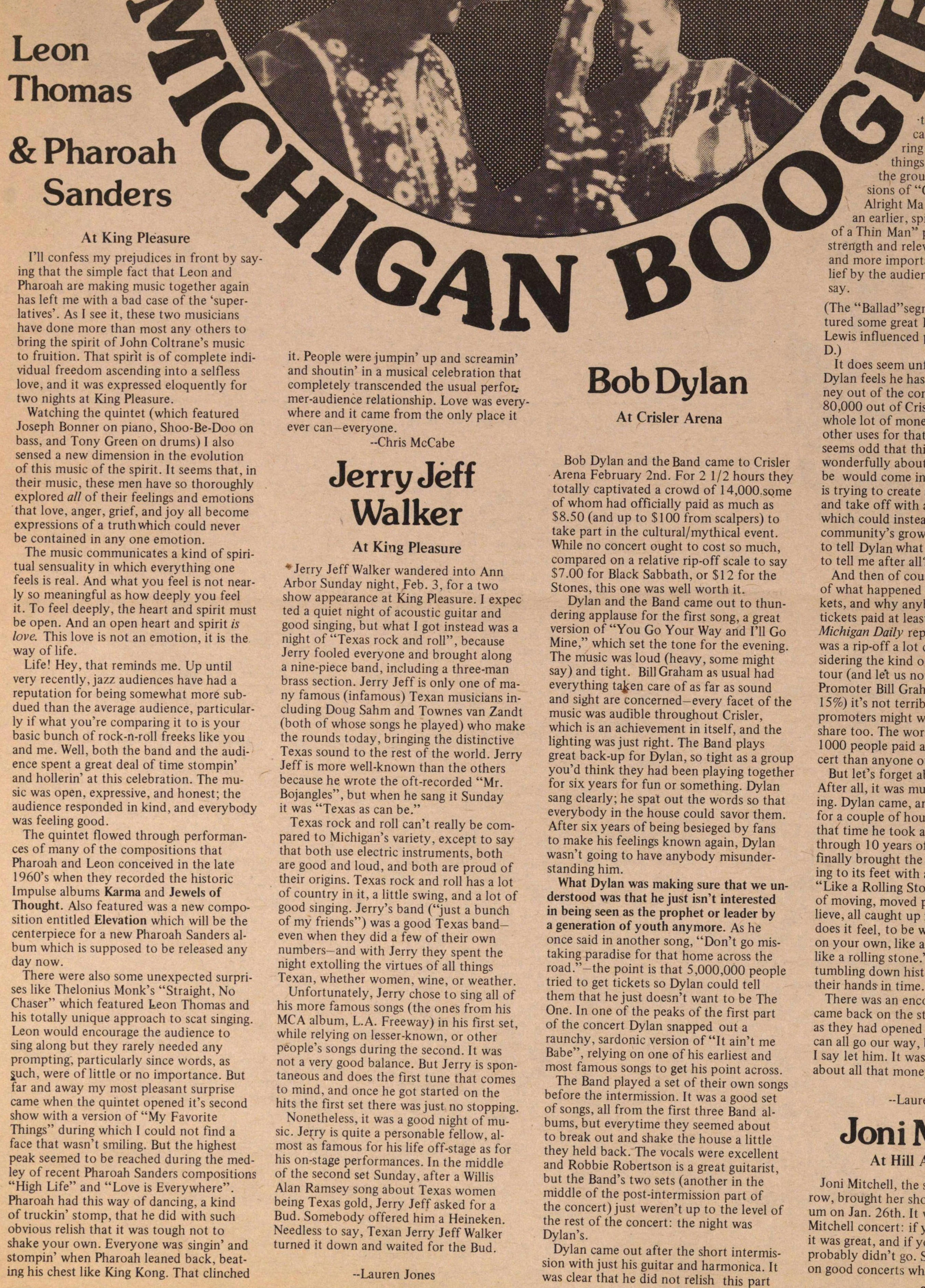 Pil confess my prejudices in fi ing that the simple fact that Lee Pharoah are making music toget has left me with a bad case of Ü latives'. As I see it. these two musicians have done more than most any others to bring the spirit of John Coltrane's music to fruition. That spirit is of complete individual freedom ascending into a selfless love, and it was expressed eloquently for two nights at King Pleasure. Watching the quintet (which featured Joseph Bonner on piano, Shoo-Be-Doo on bass, and Tony Green on drums) I also sensed a new dimensión in the evolution of this music of the spirit. It seems that, in their music, these men have so thoroughly explored all of their feelings and emotions that love, anger, grief, and joy all become expressions of a truth which could never be contained in any one emotion. The music communicates a kind of spiritual sensuality in which everything one feels is real. And what you feel is not nearly so meaningful as how deeply you feel it. To feel deeply, the heart and spirit must be open. And an open heart and spirit is love. This love is not an emotion, it is the way of life. Life! Hey, that reminds me. Up until very recently, jazz audiences have had a reputation for being somewhat more subdued than the average audience, particularly if what you're comparing it to is your basic bunch of rock-n-roll freeks like you and me. Well, both the band and the audience spent a great deal of time stompin' and hollerin' at this celebration. The music was open, expressive, and honest; the audience responded in kind, and everybody was feeling good. The quintet flowed through performances of many of the compositions that Pharoah and Leon conceived in the late 1960's when they recorded the historie Impulse albums Karma and Jewels of Thought. Also featured was a new composition entitled Elevation which will be the centerpiece for a new Pharoah Sanders album which is supposed to be released any day now. There were also some unexpected surprises like Thelonius Monk's "Straight, No Chaser" which featured keon Thomas and his totally unique approach to scat singing. Leon would encourage the audience to sing along but they rarely needed any prompting, particularly since words, as uch, were of little or no importance. But far and away my most pleasant surprise carne when the quintet opened it's second show with a version of "My Favorite Things" during which I could not find a face that wasn't smiling. But the highest peak seemed to be reached during the medley of recent Pharoah Sanders compositions "High Life" and "Love is Everywhere". Pharoah had this way of dancing, a kind of truckin' stomp, that he did with such obvious relish that it was tough not to shake your own. Everyone was singin' and stompin' when Pharoah leaned back, beating his chest like King Kong. That clinched it. People were jumpin' up and screamin' and shoutin' in a musical celebration that completely transcended the usual perfot mer-audience relationship. Love was everywhere and it came from the only place it ever can- everyone. n .H fc . .w K 1