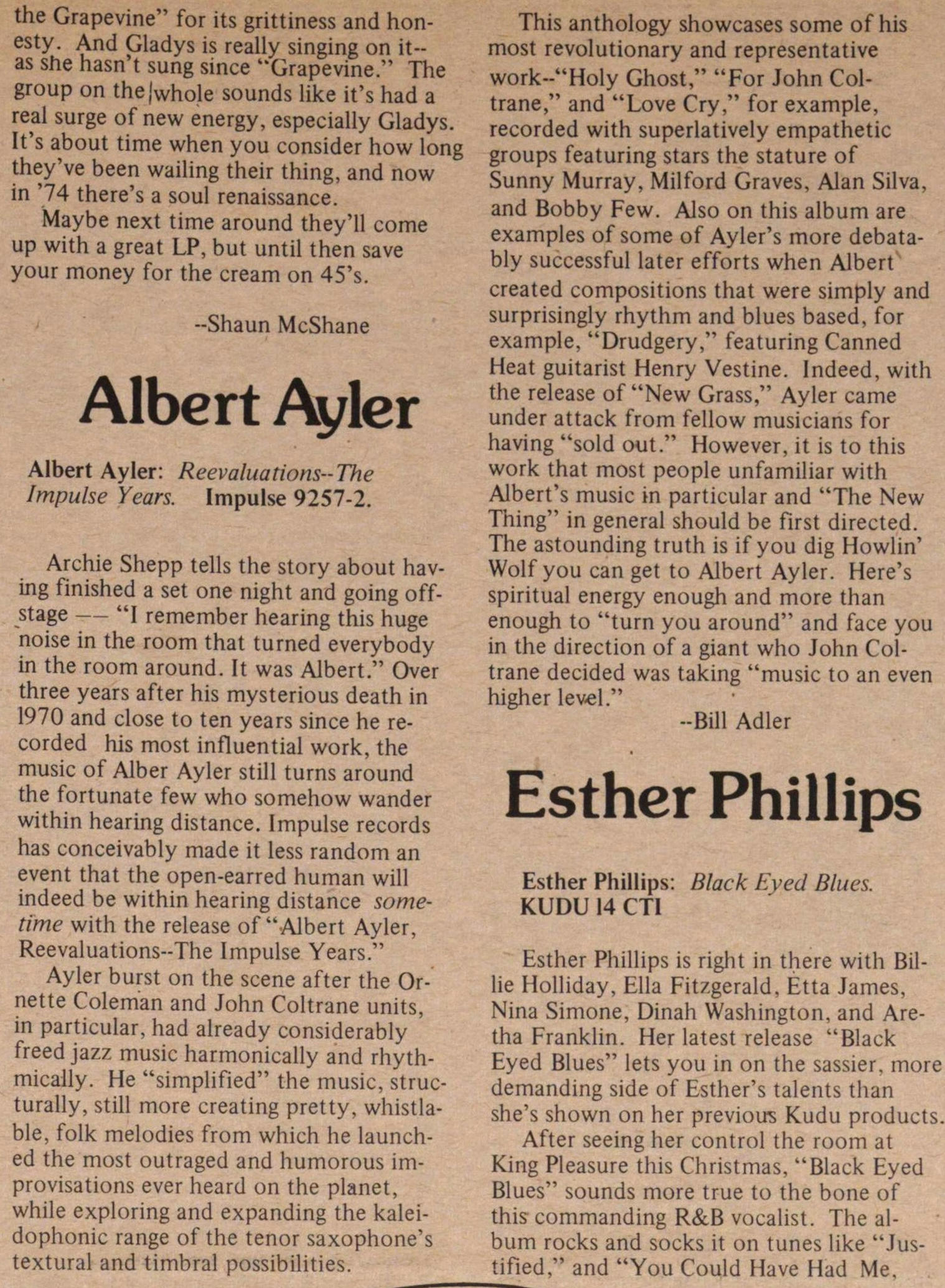 Albert Ayler: Reevaluations--The Impulse Years. Impulse 9257-2. Archie Shepp tells the story about having finished a set one night and going offstage - "I remember hearing this huge noise in the room that turned everybody in the room around. It was Albert." Over three years after his mysterious death in 1970 and close to ten years since he recorded his most influential work, the music of Alber Ayler still turns around the fortúnate few who somehow wander within hearing distance. Impulse records has conceivably made it less random an event that the open-earred human will indeed be within hearing distance sometime with the release of "Albert Ayler, Reevaluations-The Impulse Years." Ayler burst on the scène after the Ornette Coleman and John Coltrane units, in particular, had already considerably freed jazz music harmonically and rhythmically. He "simplified" the music, structurally, still more creating pretty, whistlable, folk melodies from which he launched the most outraged and humorous improvisations ever heard on the planet, while exploring and expanding the kaleidophonic range of the tenor saxophone's textural and timbral possibilities. This anthology showcases some of his most revolutionary and representative work-"Holy Ghost," "For John Coltrane," and "Love Cry," for example, recorded with superlatively empathetic groups featuring stars the stature of Sunny Murray, Milford Graves, Alan Silva, and Bobby Few. Also on this album are examples of some of Ayler's more debatably successful later efforts when Albert created compositions that were simply and surprisingly rhythm and blues based, for example, "Drudgery," featuring Canned Heat guitarist Henry Vestine. Indeed, with the release of "New Grass," Ayler carne under attack from fellow musicians for having "sold out." However, it is to this work that most people unfamiliar with Albert's music in particular and "The New Thing" in general should be fïrst directed. The astounding truth is if you dig Howlin' Wolf you can get to Albert Ayler. Here's spiritual energy enough and more than enough to "turn you around" and face you in the direction of a giant who John Coltrane decided was taking "music to an even hieher level."