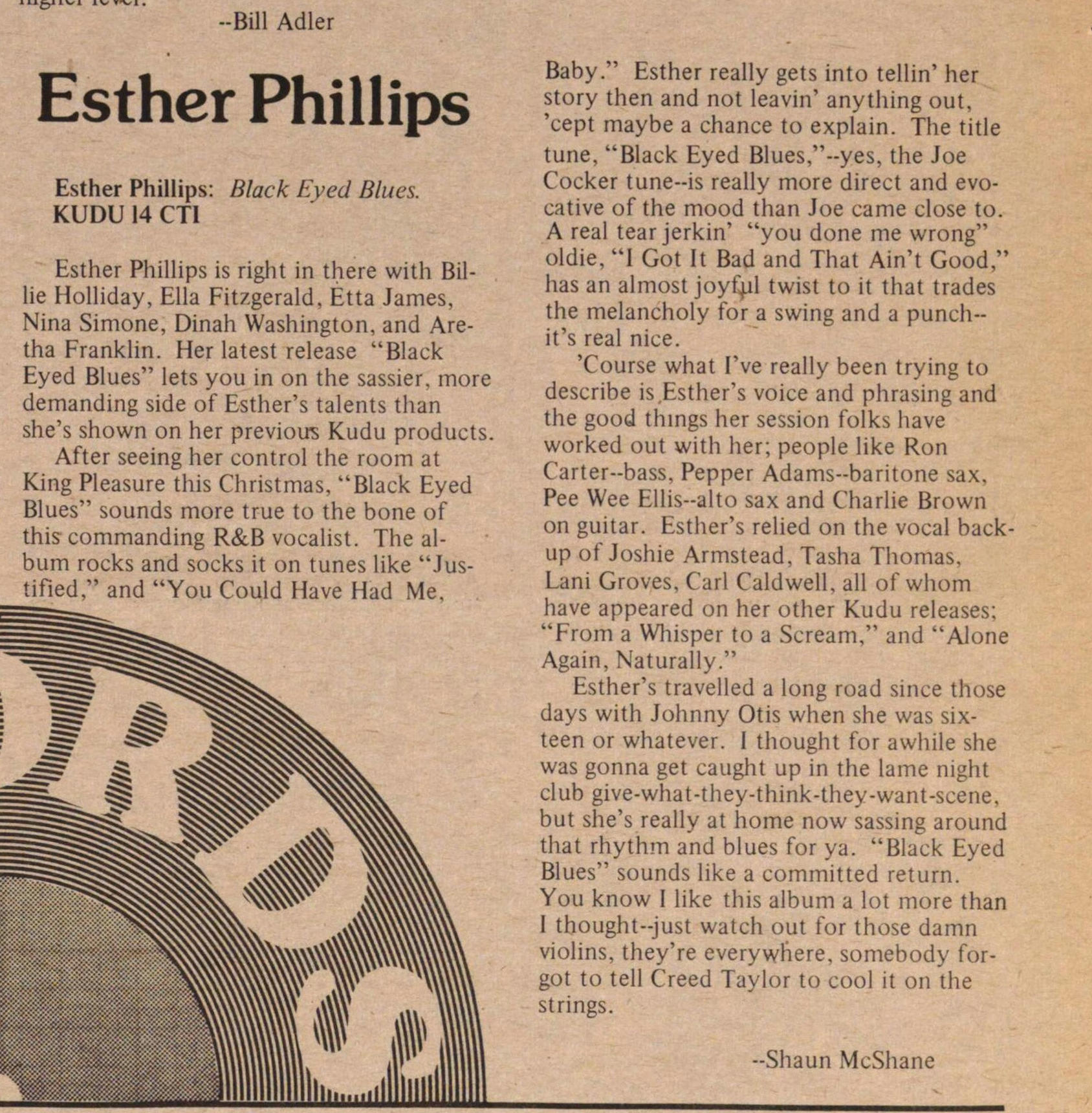 Esther Phillips: Black Eyed Blues. KUDU 14 CT1 Esther Phillips is riglit in there with Billie Holliday, Ella Fitzgerald, Etta James, Nina Simone, Dinah Washington, and Aretha Franklin. Her latest release "Black Eyed Blues" Iets you in on the sassier, more demanding side of Esther's talents than she's shown on her previoirs Kudu products. After seeing her control the room at King Pleasure this Christmas, "Black Eyed Blues" sounds more true to the bone of this commanding R&B vocalist. The album rocks and socks it on tunes like "Justified," and "You Could Have Had Me, Baby." Esther really gets into tellin' her story then and not leavin' anything out, 'cept maybe a chance to explain. The title tune, "Black Eyed Blues,"--yes, the Joe Cocker tune--is really more direct and evocative of the mood than Joe came close to. A real tear jerkin' "you done me wrong" oldie, "1 Got It Bad and That Ain't Good," has an almost joyf4.1I twist to it that trades the melancholy for a swing and a punch-it's real nice. 'Course what I've really been trying to describe is Esther's voice and phrasing and the good things her session folks have worked out with her; people like Ron Carter--bass, Pepper Adams-baritone sax. Pee Wee Ellis- alto sax and Charlie Brown on guitar. Esther's relied on the vocal backup of Joshie Armstead, Tasha Thomas, Lani Groves, Cari Caldwell, all of whom have appeared on her other Kudu releases; "From a Wliisper to a Scream," and "Alone Again, Naturally." Esther's travelled a long road since those days with Johnny Otis when she was sixteen or whatever. I thought for awhile she was gonna get caught up in the lame night club give-what-they-think-they-want-scene, but she's really at home now sassing around that rhythm and blues for ya. "Black Eyed Blues" sounds like a committed return. You know I like this album a lot more than 1 thought-just watch out for those damn violins, they're everywh ere. somebody forgot to teil Creed Taylor to cool it on the strings.