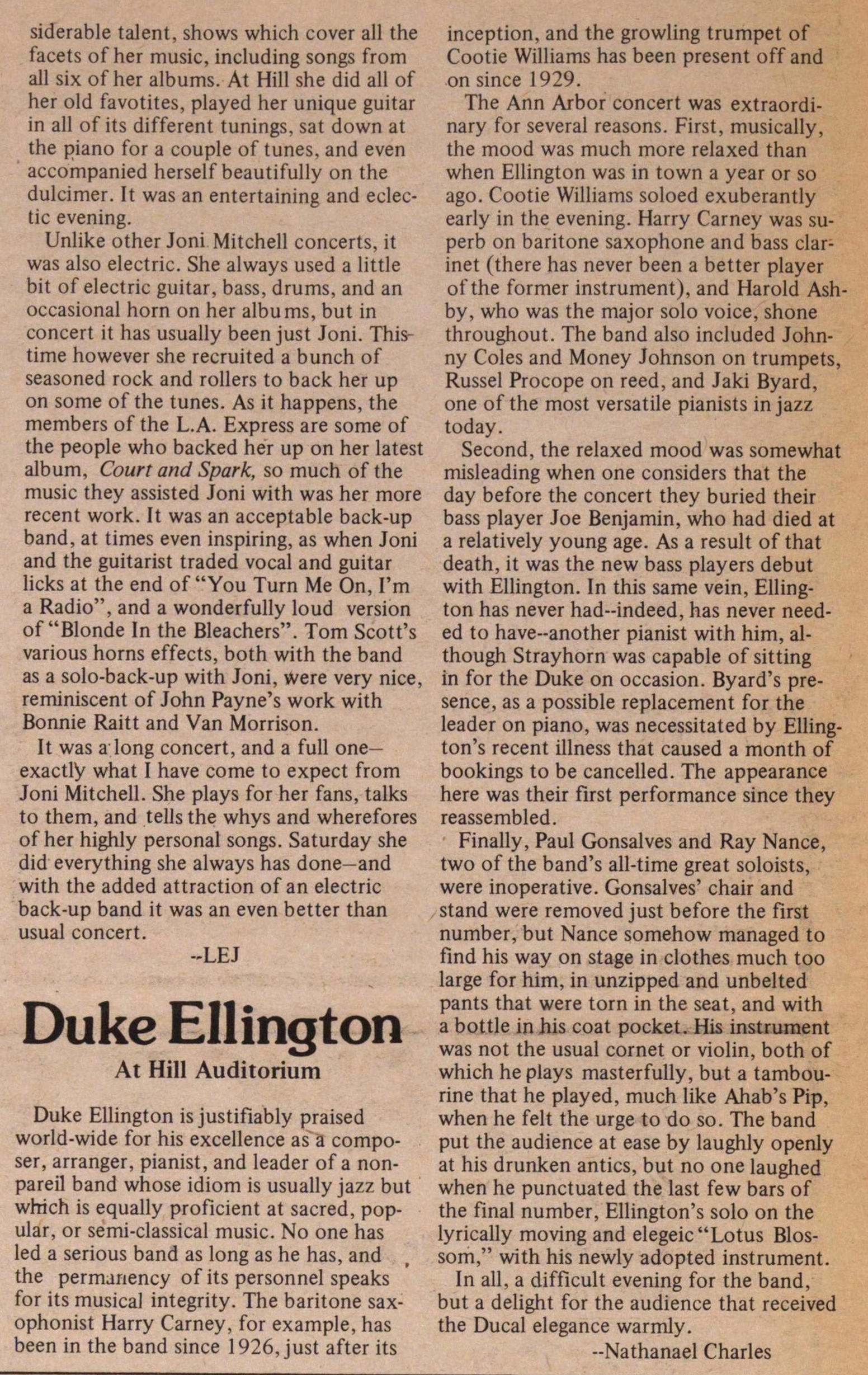 Duke Ellington is justifiably praised world-wide for his excellence as a composer, arranger, pianist, and leader of a nonparen band whose idiom is usually jazz but which is equally proficient at sacred, popular, or semi-classical music. No one has led a serious band as long as he has, and the permanency of its personnel speaks for its musical integrity. The baritone saxophonist Harry Carney, for example, has been in the band since 1926, just after its inception, and the growling trumpet of Cootie Williams has been present off and on since 1929. The Ann Arbor concert was extraordinary for several reasons. First, musically, the mood was much more relaxed than when Ellington was in town a year or so ago. Cootie Williams soloed exuberantly early in the evening. Harry Carney was superb on baritone saxophone and bass clarinet (there has never been a better player of the former instrument), and Harold Ashby, who was the major solo voice, shone throughout. The band also included Johnny Coles and Money Johnson on trumpets, Russel Procope on reed, and Jaki Byard, one of the most versatile pianists in jazz today. Second, the relaxed mood was somewhat misleading when one considers that the day before the concert they buried their bass player Joe Benjamin, who had died at a relatively young age. As a result of that death, it was the new bass players debut with Ellington. In this same vein, Ellington has never had-indeed, has never needed to have-another pianist with him, although Strayhorn was capable of sitting in for the Duke on occasion. Byard's presence, as a possible replacement for the leader on piano, was necessitated by Ellington's recent illness that caused a month of bookings to be cancelled. The appearance here was their first performance since they reassembled. Finally, Paul Gonsalves and Ray Nance, two of the band's all-time great soloists, were inoperative. Gonsalves' chair and stand were removed just before the first number, but Nance somehow managed to find his way on stage in clothes much too large for him, in unzipped and unbelted pants that were torn in the seat, and with a bottle in his coat pocket. His instrument was not the usual cornet or violin, both of which he plays masterfully, but a tambourine that he played, much like Ahab's Pip, when he feit the urge to do so. The band put the audience at ease by laughly openly at his drunken antics, but no one laughed when he punctuated the last few bars of the final number, Ellington's solo on the lyrically moving and elegeic "Lotus Blossom," with his newly adopted instrument. In all, a difficult evening for the band, but a delight for the audience that received the Ducal elegance warmly.