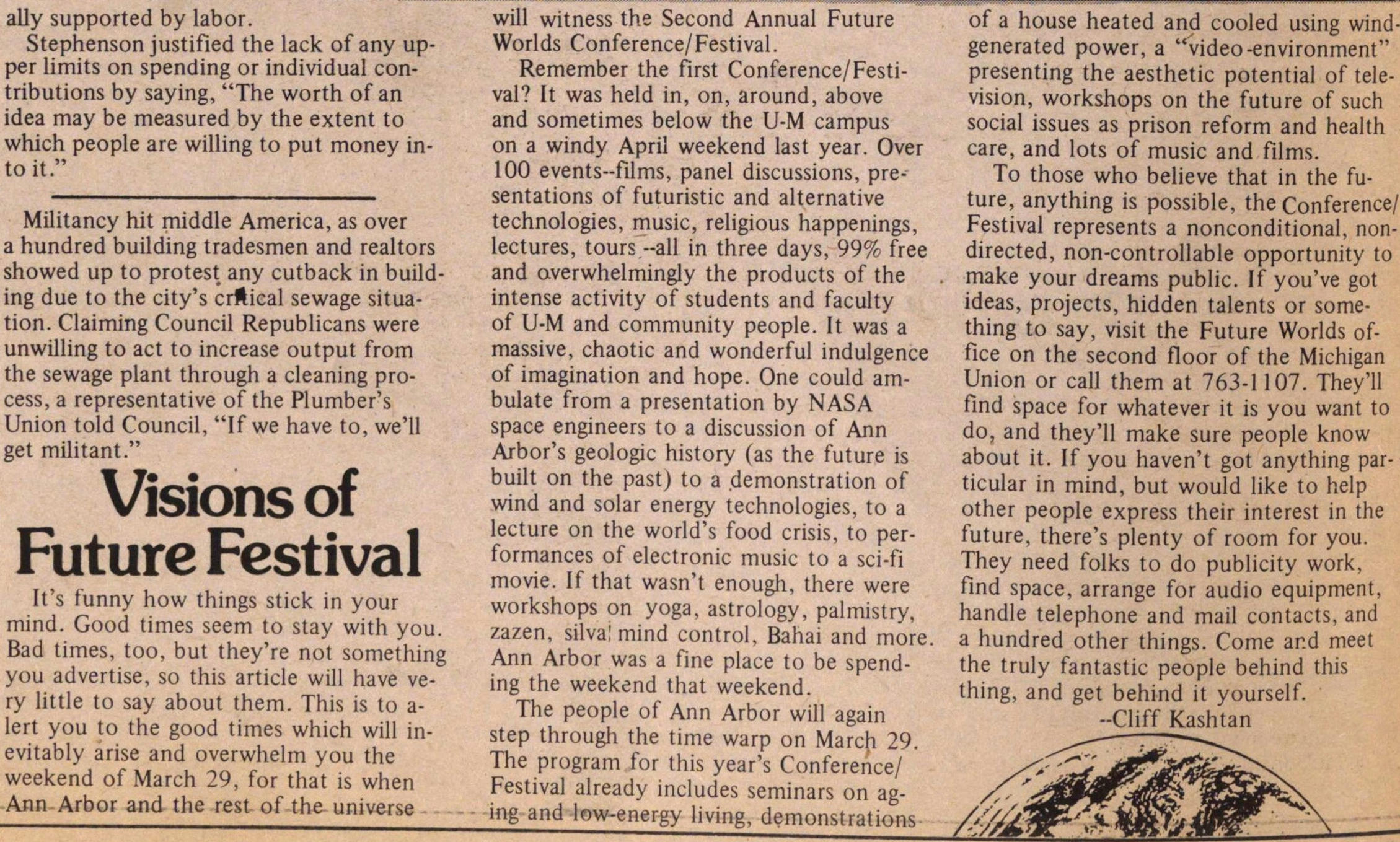 It's funny how things stick in your mind. Good times seem to stay with you. Bad times, too, but they're not something you advertise, so this article will have very little to say about them. This is to alert you to the good times which will inevitably arise and overwhelm you the weekend of March 29, for that is when Ann Arbor and the rest of the universe will witness the Second Annual Future Worlds Conference/Festival.

Remember the first Conference/Festival? It was held in, on, around, above and sometimes below the U-M campus on a windy April weekend last year. Over 100 events-films, panel discussions, presentations of futuristic and alternative technologies, music, religious happenings, lectures, tours --all in three days, 99% free and overwhelmingly the products of the intense activity of students and faculty of U-M and community people. It was a massive, chaotic and wonderful indulgence of imagination and hope. One could ambulate from a presentation by NASA space engineers to a discussion of Ann Arbor's geologic history (as the future is built on the past) to a demonstration of wind and solar energy technologies, to a lecture on the world's food crisis, to performances of electronic music to a sci-fi movie. If that wasn't enough, there were workshops on yoga, astrology, palmistry, zazen, silva! mind control, Bahai and more. Ann Arbor was a fine place to be spending the weekend that weekend.

The people of Ann Arbor will again step through the time warp on March 29. The program for this year's Conference/Festival already includes seminars on aging and low-energy living, demonstrations of a house heated and cooled using wind generated power, a "video -environment" presenting the aesthetic potential of television, workshops on the future of such social issues as prison reform and health care, and lots of music and films.

To those who believe that in the future, anything is possible, the Conference/Festival represents a non-conditional, non-directed, non-controllable opportunity to make your dreams public. If you've got ideas, projects, hidden talents or something to say, visit the Future Worlds office on the second floor of the Michigan Union or call them at 763-1107. They'll find space for whatever it is you want to do, and they'll make sure people know about it. If you haven't got anything particular in mind, but would like to help other people express their interest in the future, there's plenty of room for you. They need folks to do publicity work, find space, arrange for audio equipment, handle telephone and mail contacts, and a hundred other things. Come and meet the truly fantastic people behind this thing, and get behind it yourself.      Cliff Kashtan