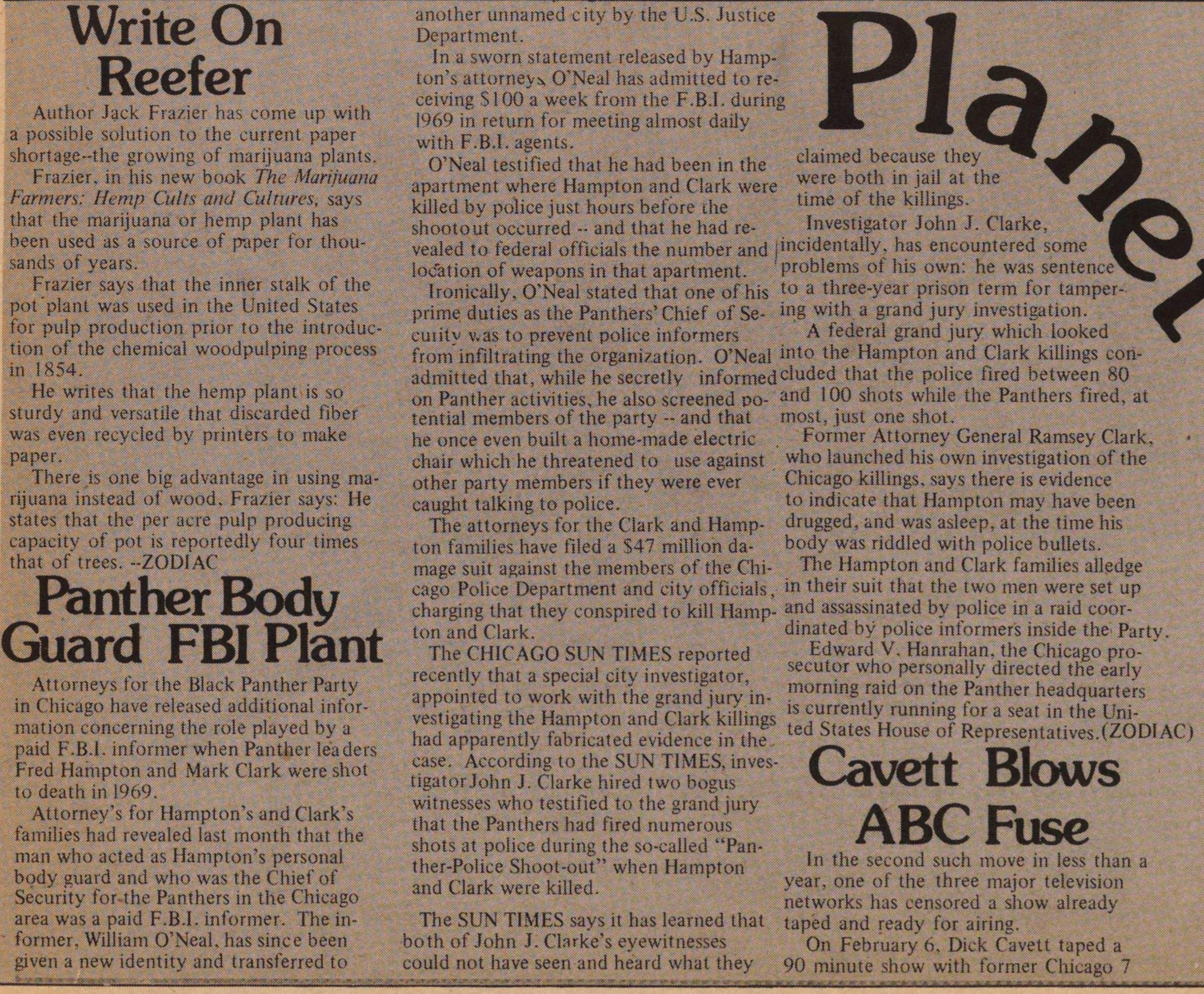 Attonieys for the Black Panther Party in Chicago have released additional information concerning the role played by a paid F-B.l. informer when Panther leaders Fred Hampton and Mark Clark wereshot to death in 1969. Attorney's for Hampton's and Clark's families had revealed last month that the man who acted as Hampton's personal body guard and who was the Chief of Sccurity for the Panthers in the Chicago área was a paid F.B.I. informer. The informer, William O'Neal, has since been given a new identity and transferred u anolher unnamed city by the U.S. Justice Department. In a sworn statement released by Hamptun's aitornevN O'Neal has admitted to receiving SI 00 a week from the F.B.I, during 1969 in return for meeting almost daüy with F.B.I. agents. O'Neal testifíed that he had been in the apartmenJ where Hampton and Oark were killed by pólice just hours before the shootout occurred - and that he had vealed to federal officials the number and location of weapons in that apartment. Ironically, O'Neal stated that one of his prime duties as the Panthers'Chief of Secuiity v.as to prevent pólice infoirners froni infilt rating the organi.ation. O'Neai admitted that, while he secretly inforrned on Panther activities, he also screened rxtential members of the party -- and that he once even built a home-made electric chair which he threatened to use against other party members if they were ever caught talking to pólice. The attorneys for the Clark and Hampton families have fïied a S47 million damage suit against the members of the Chicago Pólice Department and city officials, charging that they conspired to kill Hampton and Clark. The CHICAGO SUN TIMES reported recently that a special city investigator, appointed to work with the grand jury investigating the Hampton and Clark kiilings had apparently fabricated evidence in the case. According to the SUN TIMES, investigator John J. Clarke hired two bogus witnesses who testified to the grand jury that the Panthers had fired numerous shots at poiice during the so-called "Panther-Police Shoot-ouf ' when Hampton and Clark were killed. The SUN TIMES says it has learned that both of John J. Clarke's eyewitnesses could not have seen and heard what they Cl v ti lnvestigator John 3. Uarke, inciden tally. has encountered some W problems o! his own: he was sentence to a three-year prison term for tatnpering with a arand jury investisation. A federal grand jury whieh iooked into the Hampton and Clark kiliings con cluded that the pólice fired between 80 and 100 shots while the Panthers fired, ; most. just one shot. Former Attorney General Ramsey Ciar who launched his own investigation of th Chicago kiüings, says there is evidence to indícate that Hampton may have been drugged, ánd was asleep, at the time his body was riddled with pólice bullets. The Hampton and Clark families alledge in their suit that the two men were set up and assassinated by pólice in a raid coordinated by pólice informers inside Party. Edward V. Hanrahan. the Chicago prosecutor who personally directed the early morning raid on the Panther headquarters is currently running tbr a seat in the ted States House of Representatives.