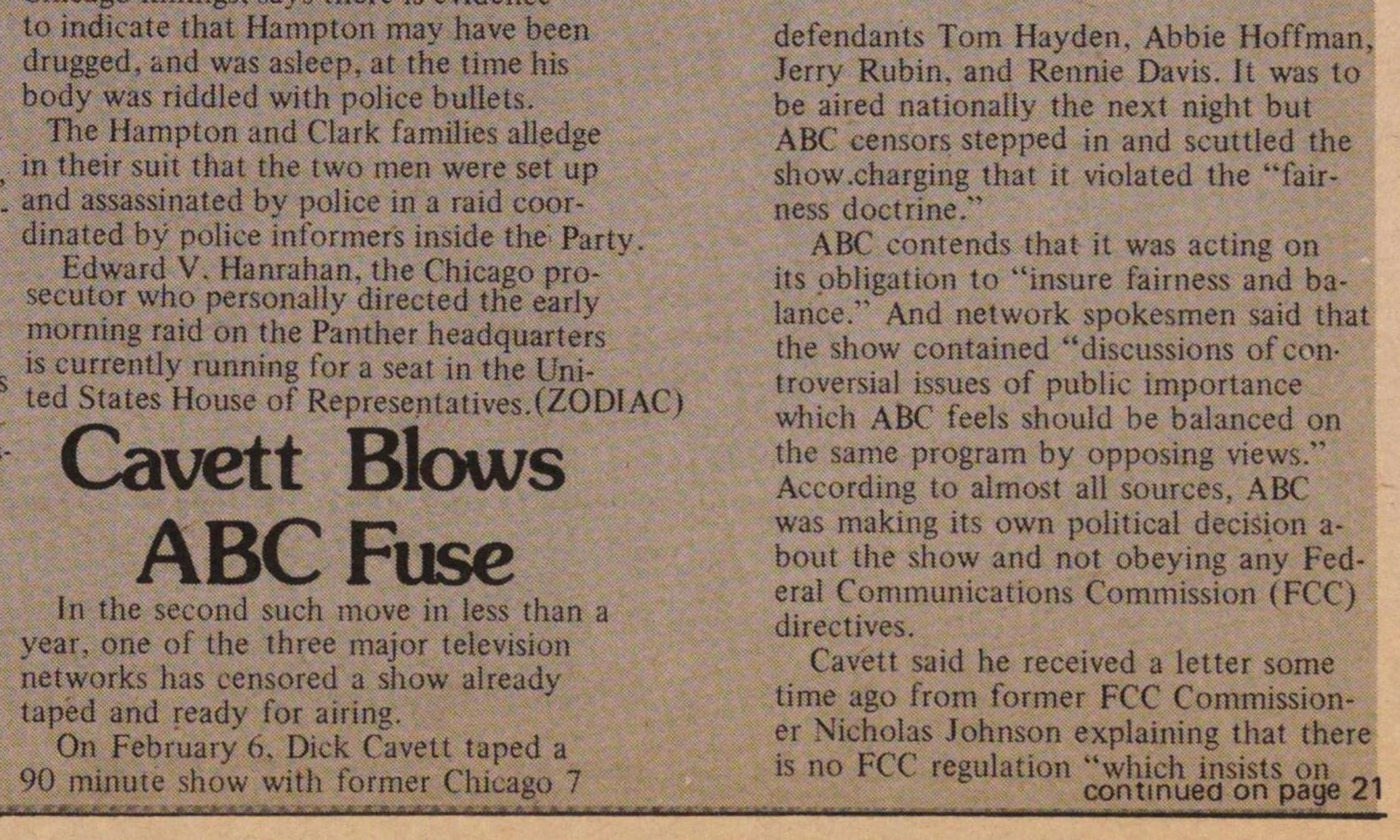 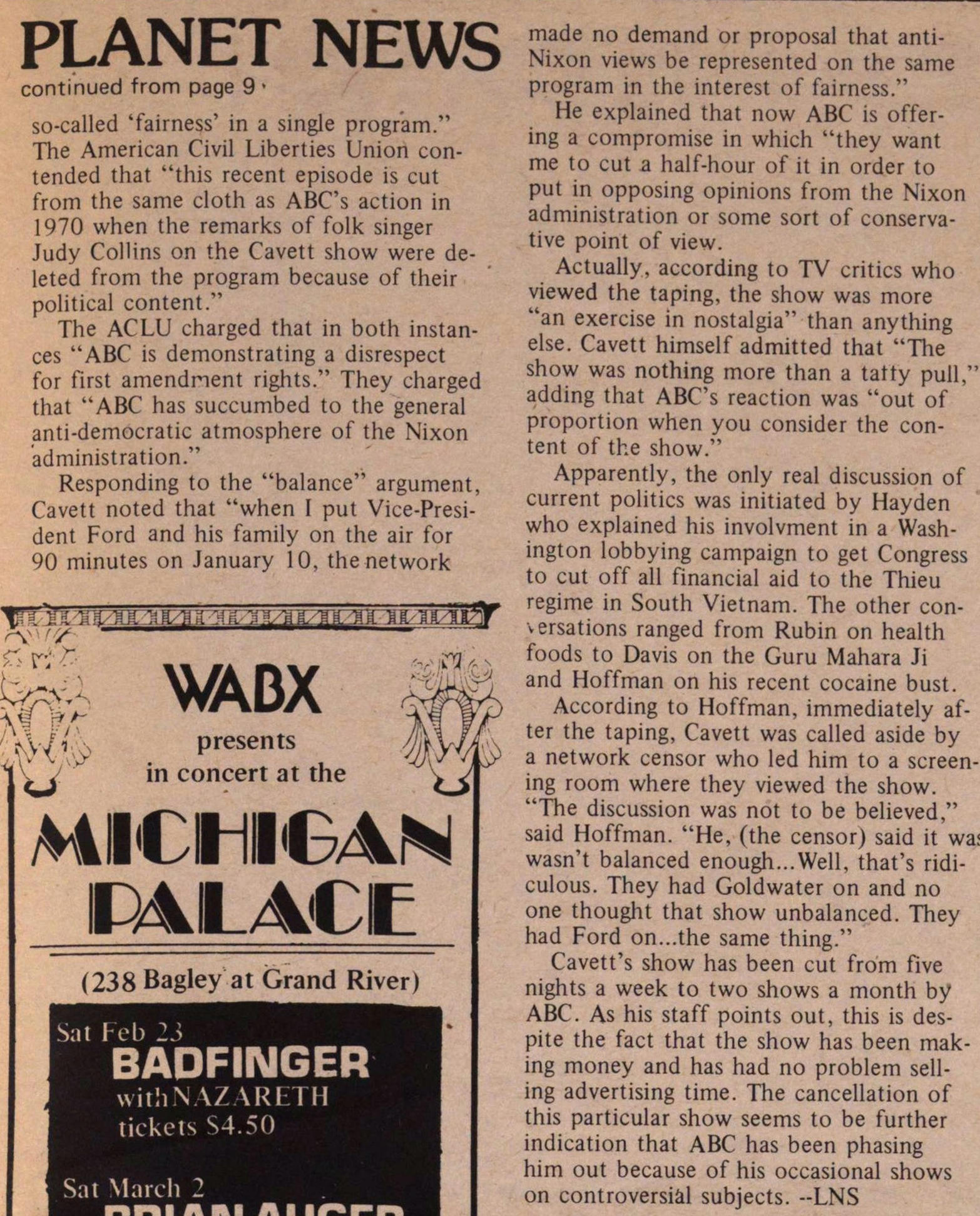 In the second such move in less than a year, one of the three major televisión networks has censored a show already taped and ready for airing. On February 6, Dkk Cavett taped a 90 minute show with former Chicago 7 defendants Tom Hay den, Abbie Hof f man, Jerry Rubin. and Rennie Davis. It was lo be aired nationally the next night but ABC censors stepped in and scuttled the show.charging that it violated the "fairness doctrine." ABC contends that it was acting on its pbligation to "insure fairness and balance." And network spokesmen said that the show contained "discussions of controversia! issues of public importance which ABC feels should be balanced on the sanie program by opposing views." According to almost all sources, ABC was making its own politica] decisión about the show and not obeying any Federal Communications Commission (FCC) directives. Cavett said he received a letter some time ago from former FCC Commissioner Nicholas Johnson explaining that there is no FCC regulation "which insists on _ continuea on page 21 PLANET NEWS continued from page 9 so-called 'fairness' in a single program." The American Civil Liberties Union contended that "this recent episode is cut from the same cloth as ABC's action in 1970 when the remarks of folk singer Judy Collins on the Cavett show were deleted from the program because of their political content." The ACLU charged that in both instances "ABC is demonstrating a disrespect for first amendnent rights." They charged that "ABC has succumbed to the general anti-democratic atmosphere of the Nixon administration." Responding to the "balance" argument, Cavett noted that "when I put Vice-President Ford and his family on the air for 90 minutes on January 10, thenetwork made no demand or proposal that antiNixon views be represented on the same program in the interest of fairness." He explained that now ABC is offering a compromise in which "they want me to cut a half-hour of it in order to put in opposing opinions from the Nixon administration or some sort of conservative point of view. Actually, according to TV critics who viewed the taping, the show was more "an exercise in nostalgia" than anything else. Cavett himself admitted that "The show was nothing more than a tatty pull," adding that ABC's reaction was "out of proportion when you consider the content of the show." Apparently, the only real discussion of current politics was initiated by Hayden who explained his involvment in a Washington lobbying campaign to get Congress to cut off all financial aid to the Thieu regime in South Vietnam. The other conversations ranged from Rubin on health foods to Davis on the Guru Mahara Ji and Hoffman on his recent cocaine bust. According to Hoffman, immediately after the taping, Cavett was called aside by a network censor who led him to a screening room where they viewed the show. "The discussion was not to be believed," said Hoffman. "He, (the censor) said it wa: wasn't balanced enough...Well, that's ridiculous. They had Goldwater on and no one thought that show unbalanced. They had Ford on. ..the same thing." Cavett's show has been cut from five nights a week to two shows a month by ABC. As his staff points out, this is despite the fact that the show has been making money and has had no problem selling advertising time. The cancellation of this particular show seems to be further indication that ABC has been phasing him out because of his occasional shows on controversial subjects