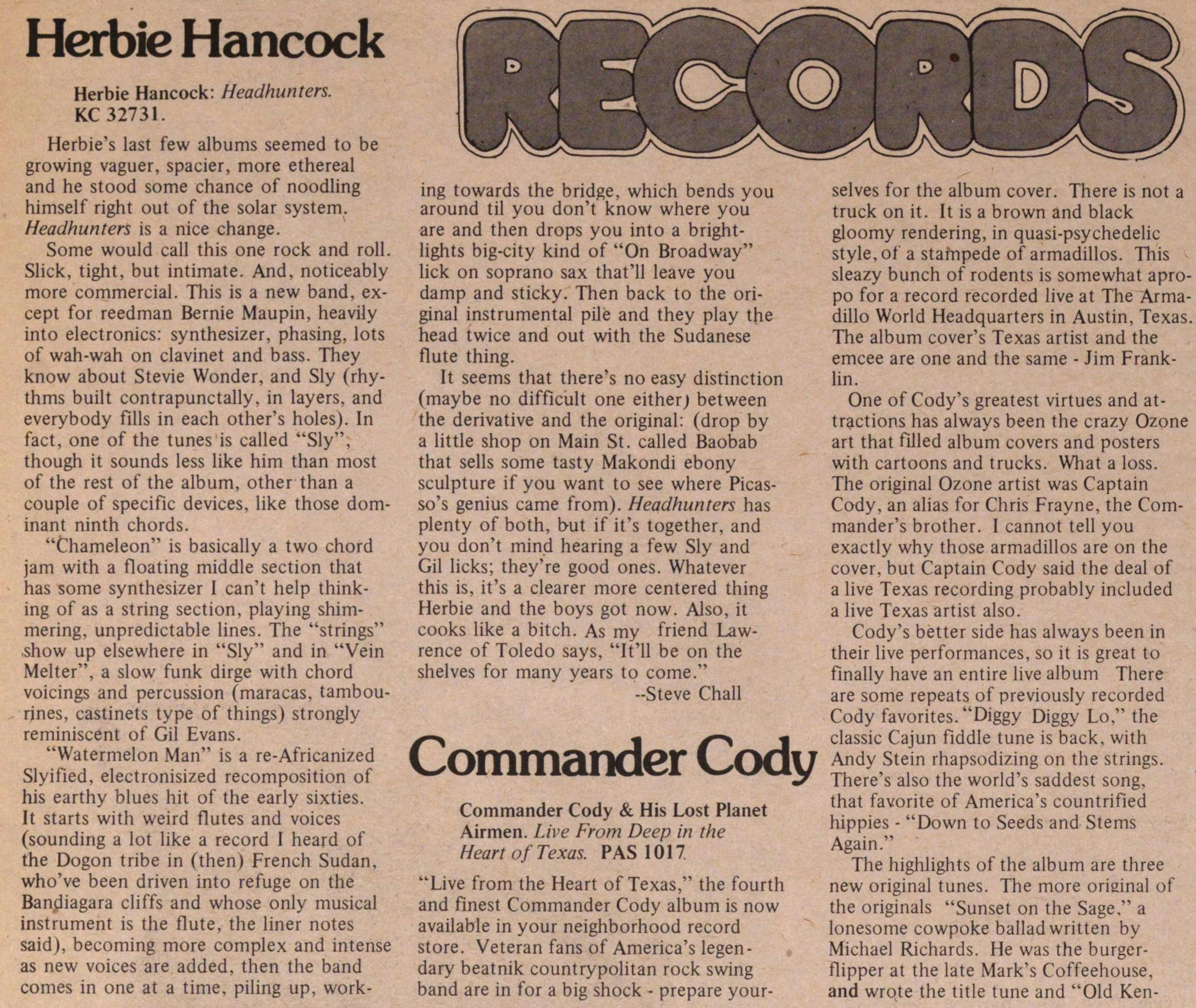 Herbie Hancock: Headhunters. KC 32731. Herbie's last few albums seemed to be growing vaguer, spacier, more ethereal and he stood some chance of noodling himself right out of the solar system. Headhunters is a nice change. Some would cali this one rock and roll. Slick, tight, but intímate. And, noticeably more commercial. This is a new band. except for reedman Bernie Maupin, heavily into electronics: synthesizer, phasing, lots of wah-wah on clavinet and bass. They know about Stevie Wonder, and Sly (rhythms built contrapunctally. in layers. and everybody filis in each other's holes). In fact, one of the tunes is called "Sly", though it sounds less like him than most of the rest of the album, other than a couple of specific devices, like those dominant ninth chords. "Chameleon" is basically a two chord jam with a floating middle section that has some synthesizer I can't help thinking of as a string section, playing shimmering, unpredictable lines. The "strings" show up elsewhere in "Sly" and in "Vein Melter", a slow funk dirge with chord voicings and percussion (maracas, tambourines, castinets type of things) strongly reminiscent of Gil Evans. "Watermelon Man" is a re-Africanized Slyified, electronisized recomposition of his earthy blues hit of the early sixties. It starts with weird flutes and voices (sounding a lot like a record I heard of the Dogon tribe in (then) French Sudan, who've been driven into refuge on the Bandiagara cliffs and whose only musical instrument is the flute, the liner notes said), becoming more complex and intense as new voices are added, then the band comes in one at a time, piling up, ing towards the bridge, which bends you around til you don't know where you are and then drops you into a brightlights big-city kind of "On Broadway" lick on soprano sax that'll leave you damp and sticky. Then back to the original instrumental pile and they play the head twice and out with the Sudanese flute thing. It seems that there's no easy distinction (maybe no difficult one eitherj between the derivative and the original: (drop by a little shop on Main St. called Baobab that sells some tasty Makondi ebony sculpture if you want to see where Picasso's genius came from). Headhunters has plenty of both, but if it's together, and you don't inind hearing a few Sly and Gil licks; they're good ones. Whatever this is, it's a clearer more centered thing Herbie and the boys got now. Also, it cooks like a bitch. As my friend Lawrence of Toledo says, "It'll be on the shelves for many years tp come."