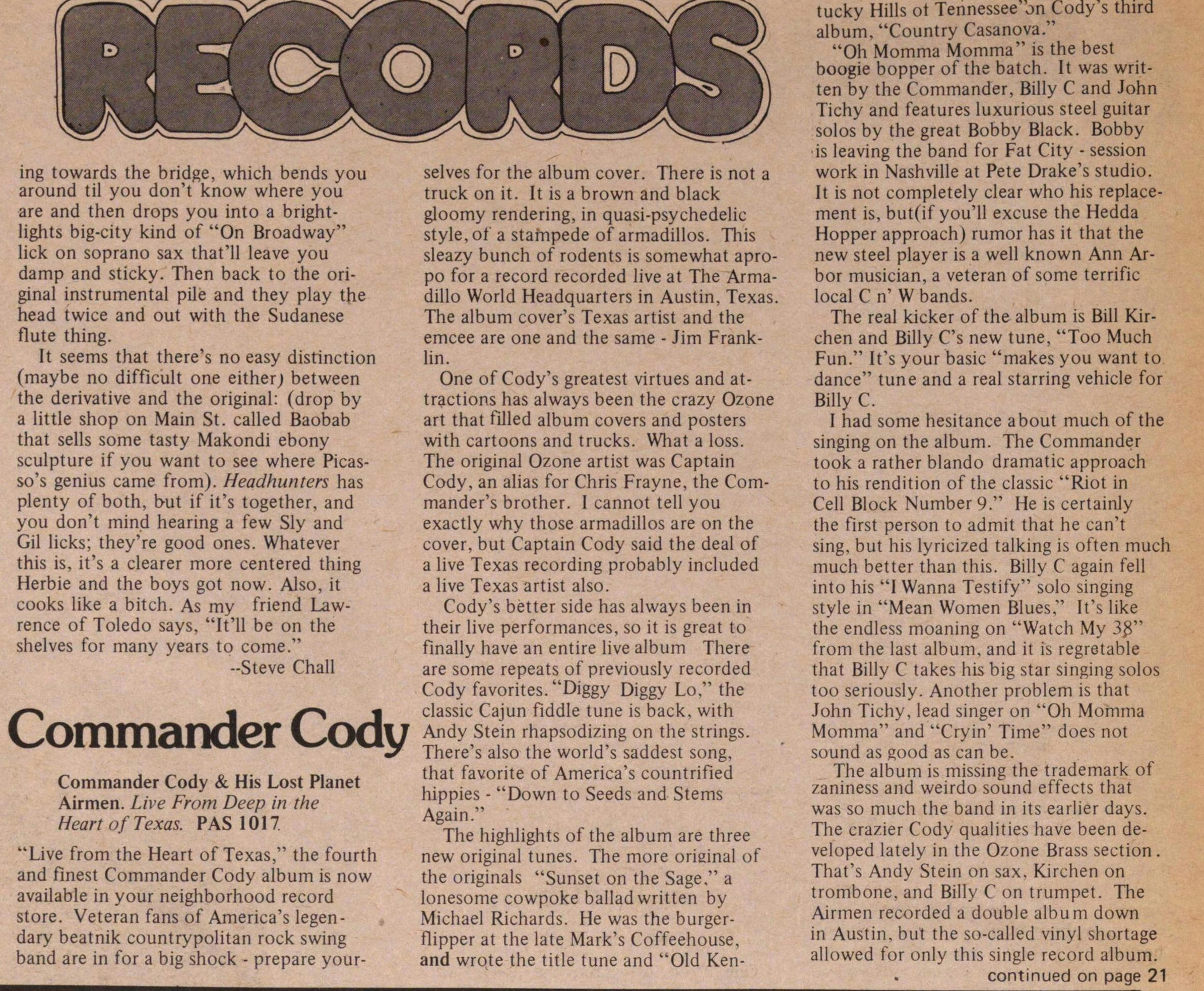 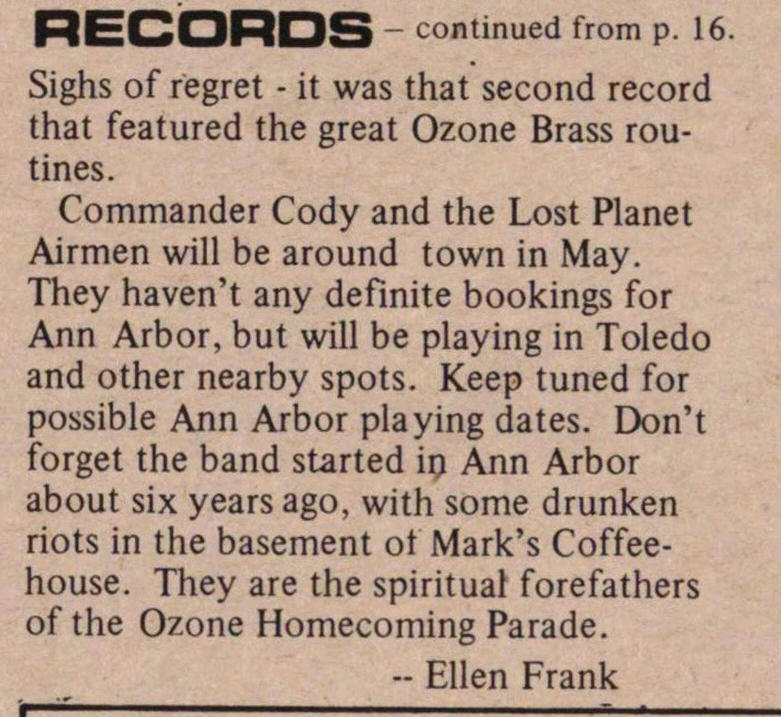 Commander Cody & His Lost Planet Airmen. Live From Deep in the Heart of Texas. PAS 1017 "Live from the Heart of Texas," the fourth and finest Commander Cody album is now available in your neighborhood record store. Veteran fans of America's legen - dary beatnik countrypolitan rock swing band are in for a big shock - prepare selves for the album cover. There is not a truck on it. It is a brown and black gloomy rendering, in quasi-psychedelic style, oí a stafnpede of armadillos. This sleazy bunch of rodents is somewhat apropo for a record recorded live at The Armadillo World Headquarters in Austin, Texas. The album cover's Texas artist and the emcee are one and the same - Jim Franklin. One of Cody's greatest virtues and attractions has always been the crazy Ozone art that fiJled album covers and posters with cartoons and trucks. What a loss. The original Ozone artist was Captain Cody, an alias for Chris Frayne, the Commander's brother. I cannot teil you exactly why those armadillos are on the cover, but Captain Cody said the deal of a live Texas recording probably included a live Texas artist also. Cody's better side has always been in their live performances, so it is great to finally have an entire live album There are some repeats of previously recorded Cody favorites. "Diggy Diggy Lo," the classic Cajun fiddle tune is back. with Andy Stein rhapsodizing on the strings. There's also the world's saddest song, that favorite of America's countrified hippies - "Down to Seeds and Sterns Again." The highlights of the album are three new original tunes. The more original of the origináis "Sunset on the Sage," a lonesome cowpoke bailad written by Michael Richards. He was the burgerflipper at the late Mark's Coffeehouse, and wrote the title tune and "Old tucky Hills ot Tennessee on Cody s third album. "Country Casanova." "Oh Momma Momma" is the best boogie bopper of the batch. It was written by the Commander, Billy C and John Tichy and features luxurious steel guitar solos by the great Bobby Black. Bobby is leaving the band for Fat City - session work in Nashville at Pete Drake's studio. It is not completely clear who his replacement is, but(if you'll excuse the Hedda Hopper approach) rumor has it that the new steel player is a well known Ann Arbor musician, a veteran of some terrific local C n' W bands. The real kicker of the album is Bill Kirchen and Billy C's new tune, "Too Much Fun." It' s your basic "makes you want to dance" tune and a real starring vehicle for Billy C. I had some hesitance a bout much of the singing on the album. The Commander took a rather blando dramatic approach to his rendition of the classic "Riot in Cell Block Number 9." He is certainly the first person to admit that he can't sing, but his lyricized talking is often much much better than this. Billy C again feil into his "I Wanna Testify" solo singing style in "Mean Women Blues." It's like the endless moaning on "Watch My 3#" from the last album, and it is regretable that Billy C takes his big star singing solos too seriously. Another problem is that John Tichy, lead singer on "Oh Momma Momma" and "Cryin' Time" does not sound as good as can be. The album is missing the trademark of zaniness and weirdo sound effects that was so much the band in its earlier days. The crazier Cody qualities have been developed lately in the Ozone Brass section . That' s Andy Stein on sax. Kirchen on trombone, and Billy C on trumpet. The Airmen recorded a doublé album down in Austin, but the so-called vinyl shortage allowed for only this single record album, continued on page 21 RECORDS - coatinued from p. 16. Sighs of regret - it was that second record that featured the great Ozone Brass routines. Commander Cody and the Lost Planet Airmen will be around town in May. They haven't any definite bookings for Ann Arbor, but will be playing in Toledo and other nearby spots. Keep tuned for possible Ann Arbor playing dates. Don't forget the band started in Ann Arbor about six yearsago, with some drunken riots in the basement ot Mark's Coffeehouse. They are the spiritual forefathers of the Ozone Homecoming Parade.