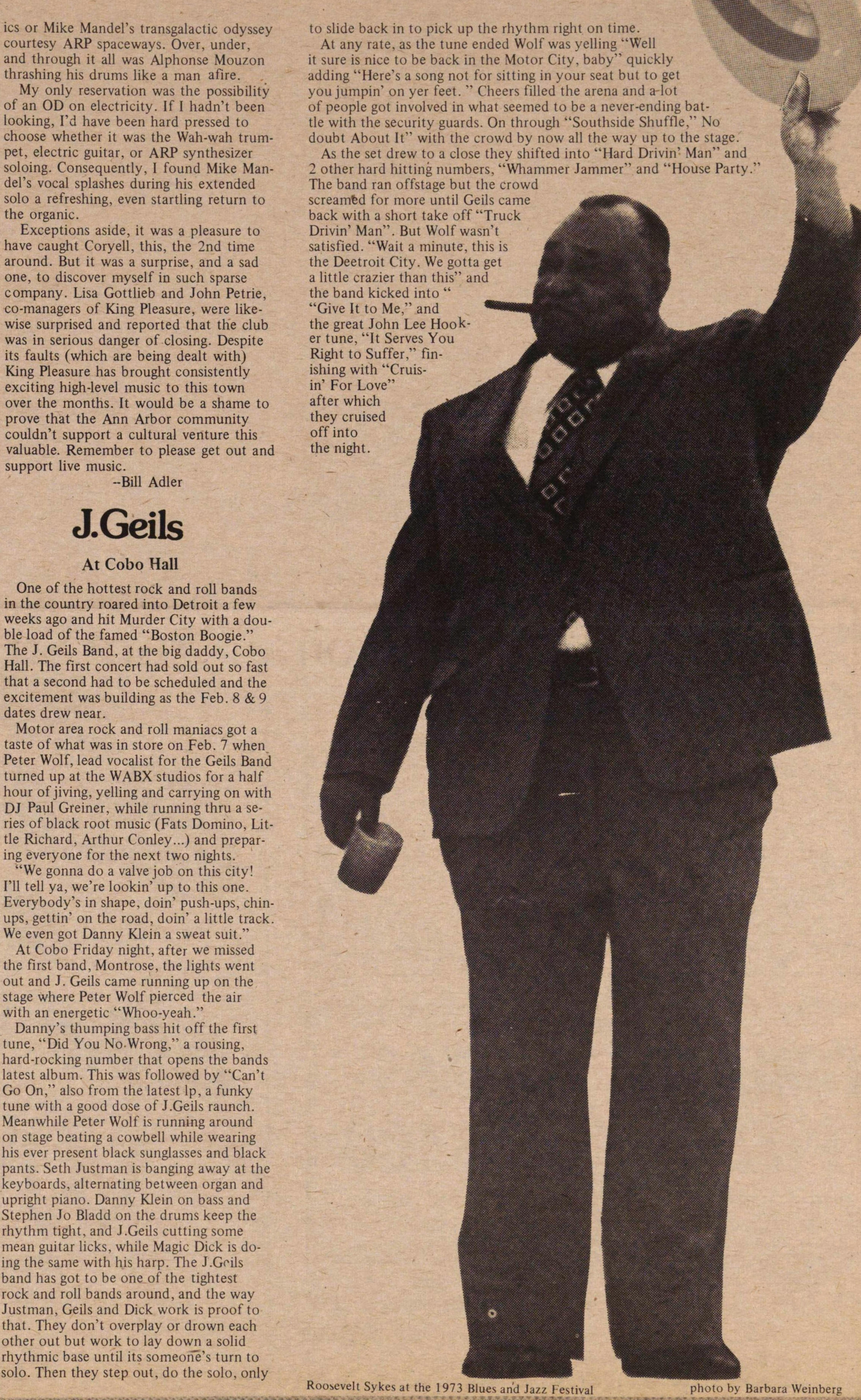 One of the hottest rock and roll bands in the country roared into Detroit a few weeks ago and hit Murder City with a doublé load of the famed "Boston Boogie." The J. Geils Band, at the big daddy, Cobo Hall. The first concert had sold out so fast that a second had to be scheduled and the excitement was building as the Feb. 8 & 9 dates drew near. Motor area rock and roll maniacs got a taste of what was in store on Feb. 7 when Peter Wolf, lead vocalist for the Geils Band turned up at the WABX studios for a half hour of jiving, yelling and carrying on with DJ Paul Greiner, while running thru a series of black root music (Fats Domino, Little Richard, Arthur Conley...) and preparing everyone for the next two nights. "We gonna do a valve job on this city! Til teil ya, we're lookin' up to this one. Everybody's in shape, doin' push-ups, chinups, gettin' on the road, doin' a little track. We even got Danny Klein a sweat suit." At Cobo Friday night, after we missed the first band, Montrose, the liglits went out and J. Geils came running up on the stage where Peter Wolf pierced the air with an energetic "Whoo-yeah." Danny's thumping bass hit off the first tune, "Did You NoWrong," a rousing, hard-rocking number that opens the bands latest album. This was followed by "Can't Go On," also from the latest lp, a funky tune with a good dose of J. Geils raunch. Meanwhile Peter Wolf is running around on stage beating a cowbell while wearing his ever present black sunglasses and black pants. Seth Justman is banging away at the keyboards, alternating between organ and upright piano. Danny Klein on bass and Stephen Jo Bladd on the drums keep the rhythm tight, and J. Geils cutting some mean guitar licks, while Magie Dick is doing the same with his harp. The J.Goils band has got to be one of the tightest rock and roll bands around, and the way Justman, Geils and Dick work is proof to that. They don't overplay or drown each other out but work to lay down a solid rhythmic base until its someonè's turn to solo. Then they step out, do the solo, only to slide back in to piek up the rhythm riglit on time. At any rate, as the tune ended Wolf was veiling "Well it sure is nice to be back in the Motor City, baby" quickly addins "Here's a song not for sittine in your seat but to get you jumpin' on yer feet. " Cheers filled the arena and a-lot of people got involved in what seemed to be a never-ending battle with the securitv auards. On throueh "Southside Shuffle." No doubt About It" with the crowd by now all the way up to the stage. As the set drew to a close they shifted into "'Hard Drivin' Man" and 2 other hard hitting numbers, "Whammer Jammer" and "House Party." The band ran offstage but the crowd screamtd for more until Geils came back with a short take off "Truck Drivin' Man". But Wolf wasn't satisfied. "Wait a minute, this is the Deetroit City. We gotta get a little crazier than this" and the band kicked into "Give It to Me," and the great John Lee Hooker tune, "It Serves You Right to Suffer," finishing with in' For Love ' after which they cruised off into the night.