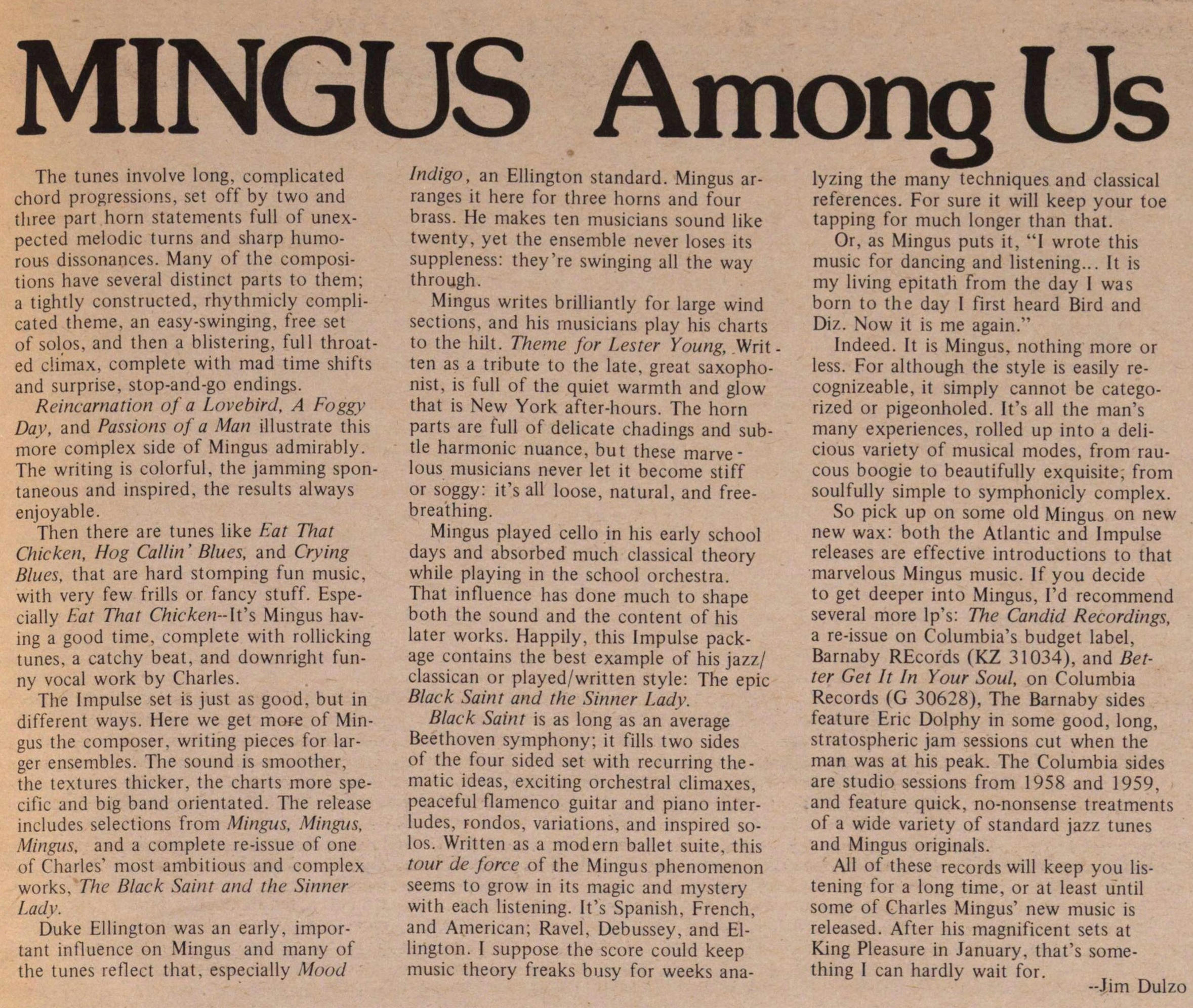 The tunes involve long, complicated chord progressions, set off by two and tliree part hom statements full of unexpected melodie turns and sliarp humorous dissonances. Many of the compositions have several distinct parts to them; a tightly constructed, rhythmicly complicated theme, an easy-swinging, free set of solos, and then a blistering, full throated climax, complete with mad time shifts and surprise, stop-and-go endings. Reincamation of a Lovebird, A Foggy Dav, and Passions of a Man Ilústrate this more complex side of Mingus admirably. The writing is colorful, the jamming spontaneous and inspired, the results always enjoyable. Then there are tunes like Kat That Chicken, Hog Callin' Blues, and Crving Blues, that are hard stomping fun music. with very few frills or fancy stuff. Especially Hat That Ctticken-lt's Mingus having a good time. complete with rollicking tunes, a catchy beat, and downright funny vocal work by Charles. The Impulse set is just as good, but in different ways. Here we get more of Mingus the composer, writing pieces for larger ensembles. The sound is smoother, the textures thicker. the charts more specific and big band orientated. The release includes seiections from Mingus, Mingus, Mingus, and a complete re-issue of one of Charles' most ambitious and complex works, The Black Saint and the Sinner Lady. Duke Ellington was an early, important influence on Mingus and many of the tunes reflect that, especially Mood Indigo, an Ellington standard. Mingus arranges it here for three horns and four brass. He makes ten musicians sound like twenty, yet the ensemble never loses its suppleness: they're swinging all the way through. Mingus writes brilliantly for large wind sections, and his musicians play his charts to the hilt. Theme for .ester Young, Writ - ten as a tribute to the late. great saxophonist, is full of the quiet warmth and glow that is New York after-hours. The hom parts are full of delicate chadings and subtle harmonie nuance, but these marvelous musicians never let it become stiff or soggy: it's all loóse, natural, and freebreathing. Mingus played cello in his early school days and absorbed much classical theory while playing in the school orchestra. That influence has done much to shape both the sound and the content of his later works. Happily, this Impulse package contains the best example of his jazz. classican or playedwritten style: The epic Black Saint and the Sinner Lady. Black Saint is as long as an average Beethoven symphony; it filis two sides of the four sided set with recurring thematic ideas, exciting orchestral climaxes, peaceful flamenco guitar and piano interludes. rondos, variations. and inspired solos. Written as a modern ballet suite, this tour de force of the Mingus phenomenon seems to grow in its magie and mystery with each listening. It's Spanish. French, and American; Ravel, Debussey, and Ellington. I suppose the score could keep music theory freaks busy for weeks lyzing the many techniques and classical references. For sure it will keep your toe tapping for much longer than that. Ór, as Mingus puts it, "I wrote this music for dancing and listening... It is my living epitath from the day I was born to the day I first heard Bird and Diz. Now it is me again." Indeed. It is Mingus. nothing more or less. For although the style is easily recognizeable, it simply cannot be categorized or pigeonholed. It's all the man's many experiences, rolled up into a delicious variety of musical modes, from raucous boogie to beautifully exquisite; from soulfully simple to symphonicly complex. So piek up on some old Mingus on new new wax: both the Atlantic and Impulse releases are effective introductions to that marvelous Mingus music. If you decide to get deeper into Mingus, I'd recommend several more lp's: The Candiel Recordings, a re-issue on Columbia's budget label, Barnaby REcords (KZ 31034), and Better Get It In Your Soul, on Columbia Records (G 30628), The Barnaby sides feature Eric Dolphy in some good, long, stratospheric jam sessions cut when the man was at his peak. The Columbia sides are studio sessions from 1958 and 1959, and feature quick, no-nonsense treatments of a wide variety of standard jazz tunes and Mingus origináis. All of these records will keep you listening for a long time, or at least until some of Charles Mingus' new music is released. After his magnificent sets at King Pleasure in January, that's something I can hardlv wait for.