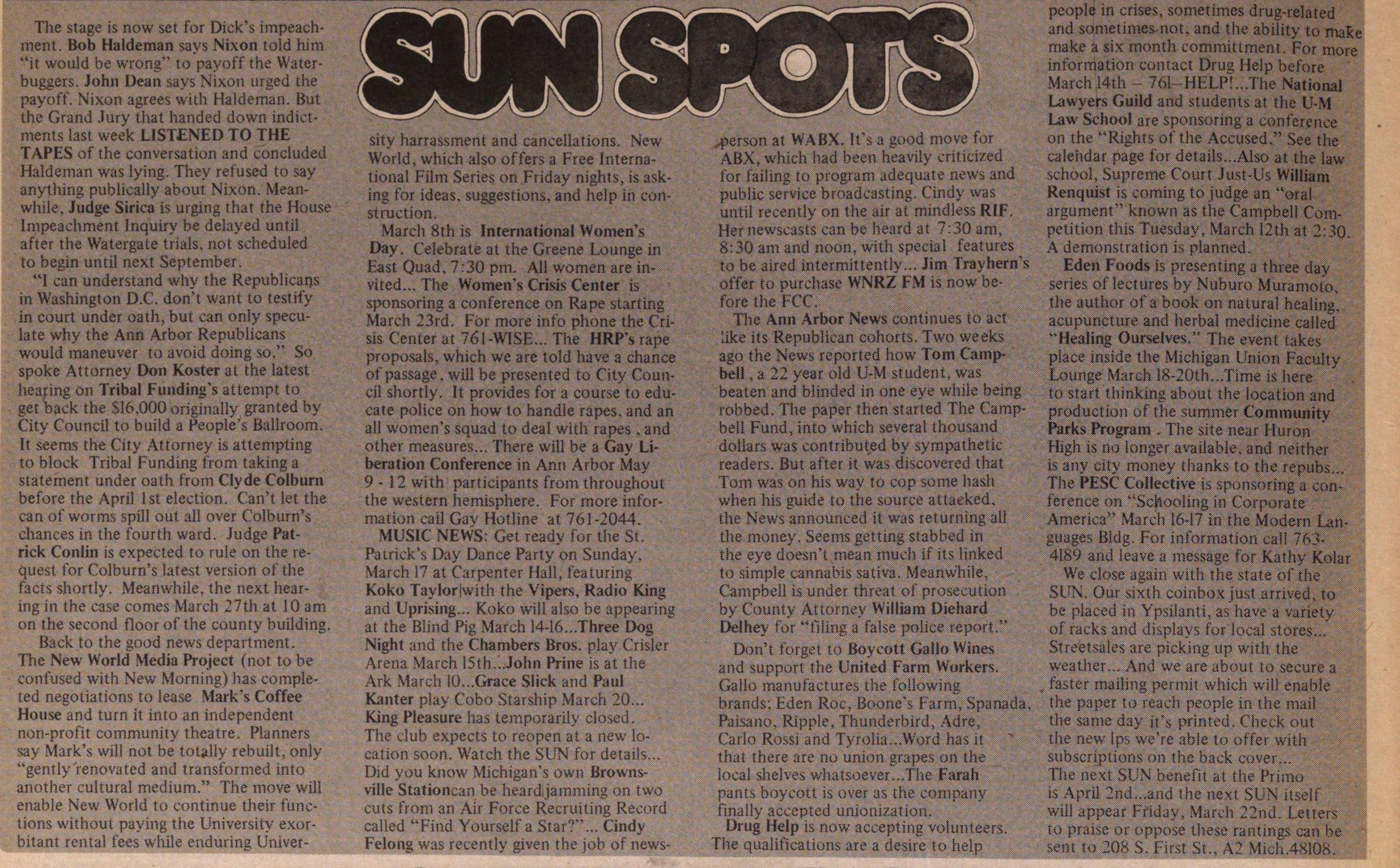 The stage is now set for Dick's impeachment. Bob Haldeman says Nixon told him "it would be wrong" to payoff the Waterbuggers. John Dean says Nixon urged the payoff. Nixon agrees with Haldeman. But the Grand Jury that handed down indictments last week LISTENED TO THE TAPES of the conversation and concluded Haldeman was lying. They refused to say anything publicly about Nixon. Meanwhile, Judge Sirica is urging that the House Impeachment Inquiry be delayed until after the Watergale trials, not scheduled to begin until next September.

"I can understand why the Republicans in Washington D.C. don't want to testify in court under oath, but can only speculate why the Ann Arbor Republicans would maneuver to avoid doing so." So spoke Attorney Don Koster at the latest hearing on Tribal Funding's attempt to get back the $16,000 originally granted by City Council to build a People's Ballroom. It seems the City Attorney is attempting to block Tribal Funding from taking a statement under oath from Clyde Colburn before the April 1st election. Can't let the can of worms spill out all over Colburn's chances in the fourth ward. Judge Patrick Conlin is expected to rule on the request for Coiburn's latest version of the facts shortly. Meanwhile, the next hearing in the case comes March 27th at 10 am on the second floor of the county building.

Back to the good news department. The New World Media Project (not to be confused with New Morning) has completed negotiations to lease Mark 's Coffee House and turn it into an independent non-profit community theatre. Planners say Mark's will not be totally rebuilt, only "gently renovated and transformed into another cultural medium." The move will enable New World to continue their functions without paying the University exorbitant rental fees while enduring University harrassment and cancellations. New World, which also offers a Free International Film Series on Friday nights, is asking for ideas, suggestions, and help in construction.

March 8th is International Women's Day. Celebrate at the Greene Lounge in East Quad. 7:30 pm. All women are invited... The Women's Crisis Center is sponsoring a conference on Rape starting March 23rd. För more info phone the Crisis Center at 761-WISE... The HRP's rape proposals, which we are told have a chance of passage , will be presented to City Council shortly. It provides for a course to educate police on how to handle rapes, and an all women's squad to deal with rapes, and other measures... There will be a Gay Liberation Conference in Ann Arbor May 9-12 with participants from throughout the western hemisphere. For more information call Gay Hotline at 761-2044.

MUSIC NEWS: Get ready for the St. Patrick's Day Dance Party on Sunday, March 17 at Carpenter Hall, featuring Koko Taylor with the Vipers, Radio King and Uprising... Koko will also be appearing at the Blind Pig March 14-16. ..Three Dog Night and the Chambers Bros. play Crisler Arena March I5th...John Prine is at the Ark March 10...Grace Slick and Paul Kanter play Cobo Starship March 20... King Pleasure has temporarily closed . The club expects to reopen at a new location soon. Watch the SUN for details... Did you know Michigan's own Brownsville Station can be heard,jamming on two cuts from an Air Force Recruiting Record called "Find Yourself a Star"?... Cindy Felong was recently given the job of newsperson at WABX. It's a good move for ABX, which had been heavily criticized for failing to program adequate news and public service broadcasting, Cindy was until recently on the air at mindless RIF. Her newscasts can be heard at 7:30 am, 8:30 am and noon, with special features to be aired intermittently... Jim Trayhern's offer to purchase WNRZ FiW is now before the FCC.

The Ann Arbor News continues to act like its Republican cohorts. Two weeks ago the News reported how Tom Campbell , a 22 year old U-M student, was beaten and blinded in one eye white being robbed. The paper then started The Campbell Fund, into which several thousand dollars was contributed by syrnpatheic readers. But after it was discovered that Tom was on his way to cop some hash when his guide to the source attacked, the News announced it was returning all the money. Seems getting stabbed in the eye doesn't mean much if its linked to simple cannabis sativa. Meanwhile, Campbell is under threat of prosecution by County Attorney William Diehard Delhey for "filing a false police report."

Don't forget to Boycott Gallo Wines and support the United Farm Workers. Gallo manufactures the following brands; Eden Roe, Boone's Farm, Spanada, Paisano, Ripple, Thunderbird, Adre, Cario Rossi and Tyrolia...Word has it that there are no union grapes on the local shelves whatsoever...The Farah pants boycott is over as the company finally accepted unionization.

Drug Help is now accepting volunteers. The qualifications are a desire to help people in crises, sometimes drug-related and sometimes not, and the ability to make make a six month commitment. For more information contact Drug Help before March 14th - 761 - HELP!...The National Lawyers Guild and students at the U-M Law School are sponsoring a conference on the "Rights of the Accused." See the calendar page for details...Also at the law school, Supreme Court Just-Us William Renquist is coming to judge an "oral argument" known as the Campbell Competition this Tuesday, March 12th at 2:30. A demonstration is planned.

Eden Foods is presenting a three day series of lectures by Nuburo Muramolo, the author of a book on natural healing, acupuncture and herbal medicine called "Healing Ourselves." The event takes place inside the Michigan Union Faculty Lounge March 18-20th...Time is here to start thinking about the location and production of the summer Community Parks Program. The site near Huron High is no longer available, and neither is any city money thanks to the repubs... The PESC Collective is sponsoring a conference on "Schooling in Corporate America" March 16-17 in the Modern Languages Bldg. For information call 7634189 and leave a message for Kathy Kolar.

We close again with the state of the SUN. Our sixth coinbox just arrived, to be placed in Ypsilanti, as have a variety of racks and displays for local stores... Streetsales are picking up with the weather... And we are about to secure a faster mailing permit which will enable the paper to reach people in the mail the same day it's printed. Check out the new Ips we're able to offer with subscriptions on the back cover... The next SUN benefit at the Primo is April 2nd...and the next SUN itself will appear Friday, March 22nd. Letters to praise or oppose these rantings can be sent to 208 S. First St., A2 Mich. 48108.