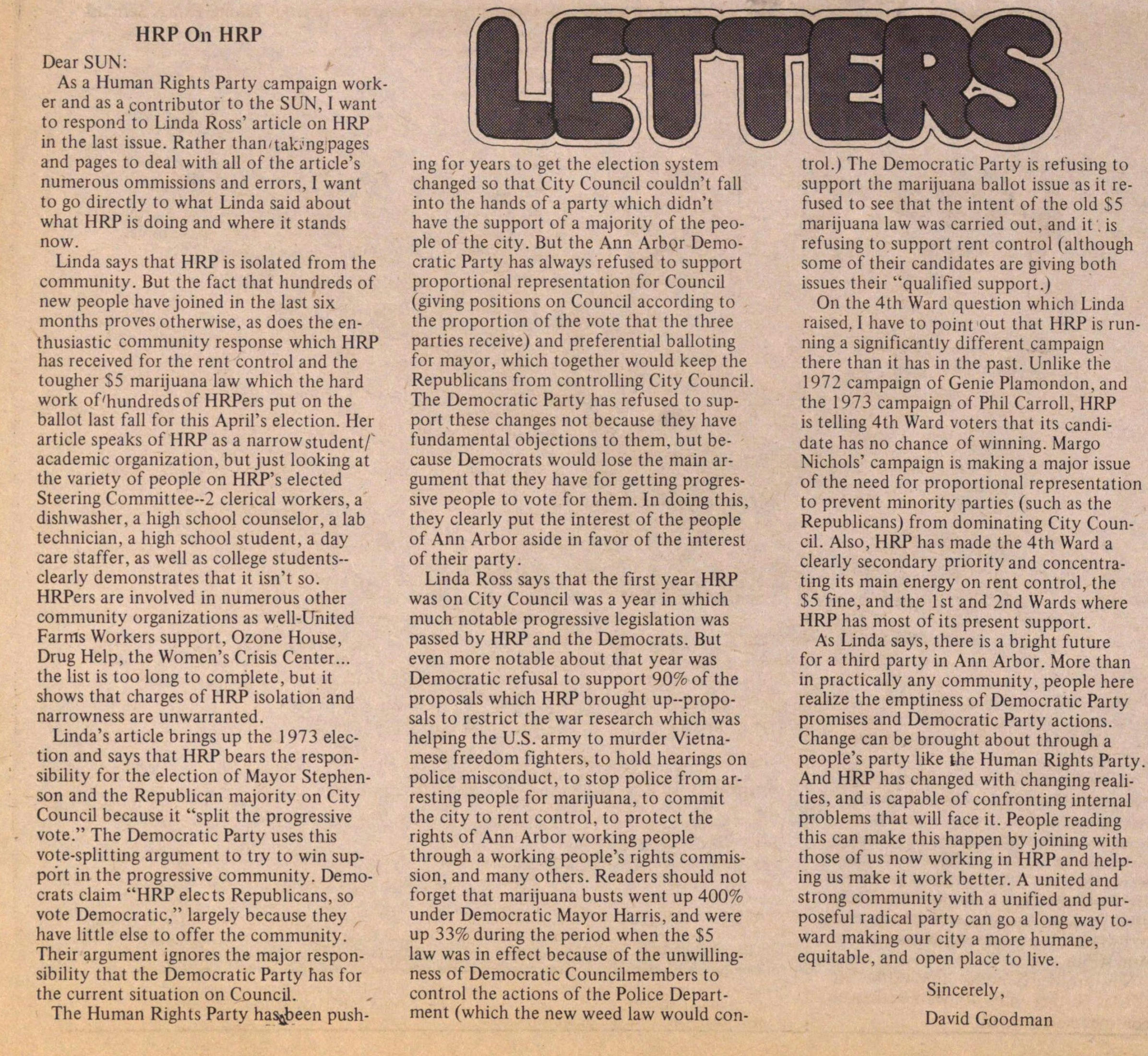 As a Human Rights Party campaign worker and as a contributor to the SUN, I want to respond to Linda Ross' article on HRP in the last issue. Rather than taking pages and pages to deal with all of the article's numerous omissions and errors, I want to go directly to what Linda said about what HRP is doing and where it stands now.

Linda says that HRP is isolated from the community. But the fact that hundreds of new people have joined in the last six months proves otherwise. as does the enthusiastic community response which HRP has received for the rent control and the tougher $5 marijuana law which the hard work of hundreds of HRPers put on the ballot last fall for this April's election. Her article speaks of HRP as a narrow student academic organization, but just looking at the variety of people on HRP's elected Steering Committee -- 2 clerical workers. a dishwasher, a high school counselor, a lab technician, a high school student, a day care staffer, as well as college students -- clearly demonstrates that it isn't so. HRPers are involved in numerous other community organizations as well-United Farms Workers support, Ozone House, Drug Help, the Women's Crisis Center... the list is too long to complete, but it shows that charges of HRP isolation and narrowness are unwarranted.

Linda's article brings up the 1973 election and says that HRP bears the responsibility for the election of Mayor Stephenson and the Republican majority on City Council because it "split the progressive vote." The Democratic Party uses this vote-splitting argument to try to win support in the progressive community. Democrats claim "HRP elects Republicans, so vote Democratic," largely because they have little else to offer the community. Their argument ignores the major responsibility that the Democratic Party has for the current situation on Council.

The Human Rights Party has been pushing for years to get the election system changed so that City Council couldn't fall into the hands of a party which didn't have the support of a majority of the people of the city. But the Ann Arbor Democratic Party has always refused to support proportional representation for Council (giving positions on Council according to the proportion of the vote that the three parties receive) and preferential balloting for mayor, which together would keep the Republicans from controlling City Council. The Democratic Party has refused to support these changes not because they have fundamental objections to them, but because Democrats would lose the main argument that they have for getting progressive people to vote for them. In doing this, they clearly put the interest of the people of Ann Arbor aside in favor of the interest of their party.

Linda Ross says that the first year HRP was on City Council was a year in which much notable progressive legislation was passed by HRP and the Democrats. But even more notable about that year was Democratic refusal to support 90% of the proposals which HRP brought up-proposals to restrict the war research which was helping the U.S. army to murder Vietnamese freedom fighters, to hold hearings on police misconduct, to stop police from arresting people for marijuana, to commit the city to rent control, to protect the rights of Ann Arbor working people through a working people's rights commission, and many others. Readers should not forget that marijuana busts went up 400% under Democratic Mayor Harris, and were up 33% during the period when the $5 law was in effect because of the unwillingness of Democratic Councilmembers to control the actions of the Police Department (which the new weed law would control.) The Democratic Party is refusing to support the marijuana ballot issue as it refused to see that the intent of the old $5 marijuana law was carried out, and it is refusing to support rent control (although some of their candidates are giving both issues their "qualified support.)

On the 4th Ward question which Linda raised. I have to point out that HRP is running a significantly different campaign there than it has in the past. Unlike the 1972 campaign of Genie Plamondon, and the 1973 campaign of Phil Carroll, HRP is telling 4th Ward voters that its candidate has no chance of winning. Margo Nichols' campaign is making a major issue of the need for proportional representation to prevent minority parties (such as the Republicans) from dominating City Council. Also, HRP has made the 4th Ward a clearly secondary priority and concentrating its main energy on rent control, the $5 fine, and the lst and 2nd Wards where HRP has most of its present support.

As Linda says, there is a bright future for a third party in Ann Arbor. More than in practically any community, people here realize the emptiness of Democratic Party promises and Democratic Party actions. Change can be brought about through a people's party like the Human Rights Party. And HRP has changed with changing realities, and is capable of confronting internal problems that will face it. People reading this can make this happen by joining with those of us now working in HRP and helping us make it work better. A united and strong community with a unified and purposeful radical party can go a long way toward making our city a more humane, equitable, and open place to live.