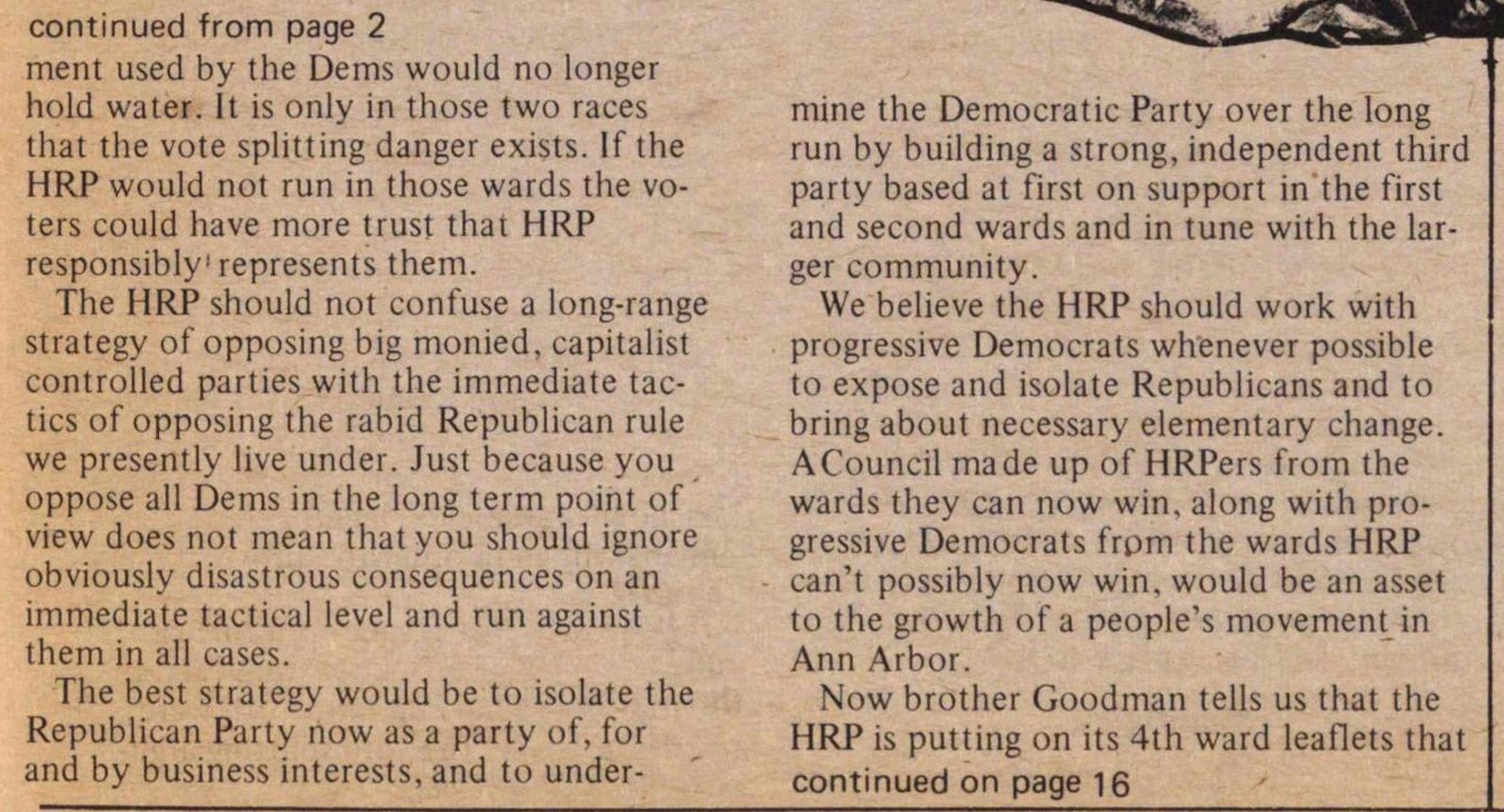 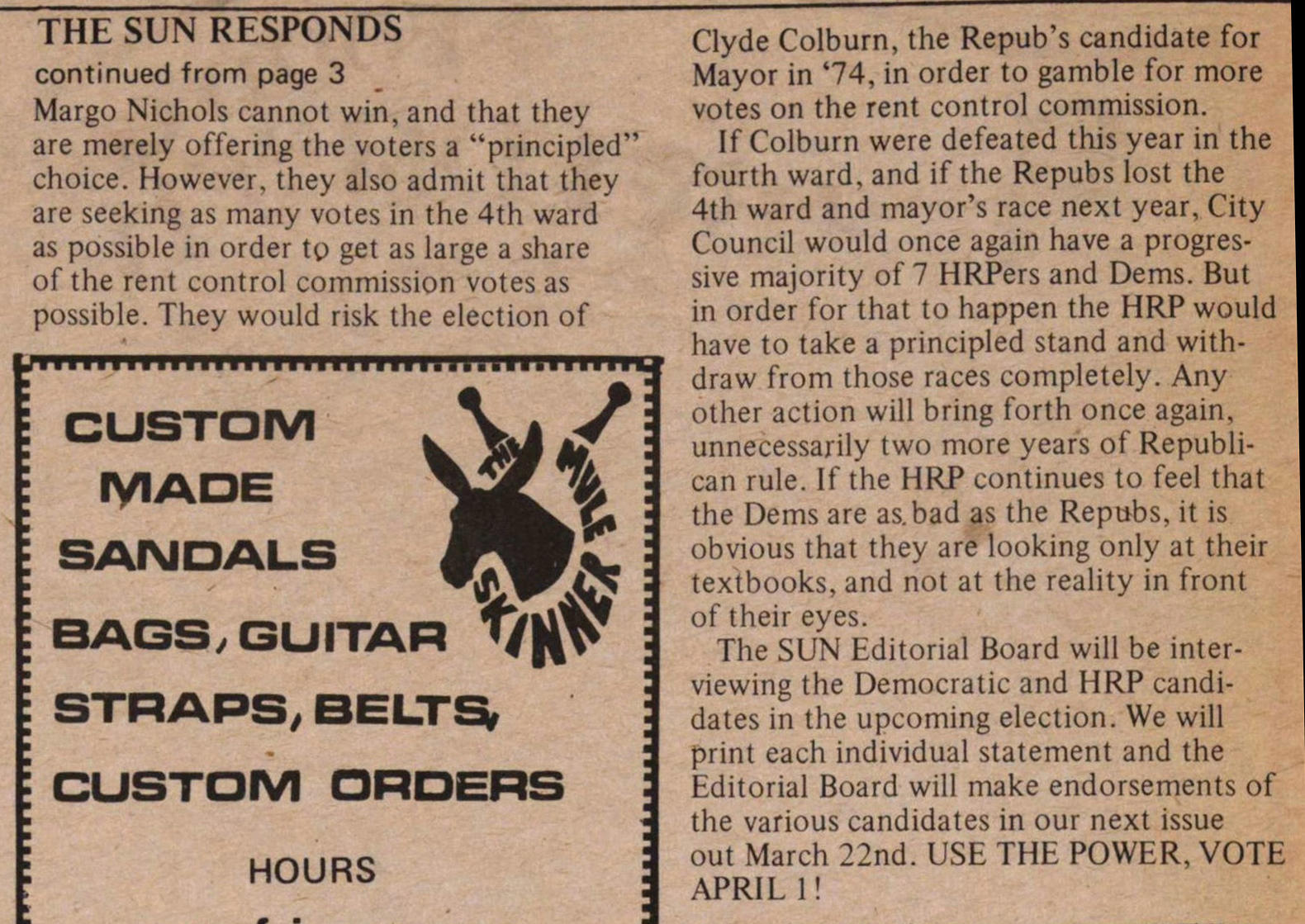 The Ann Arbor SUN would like to believe David Goodman's assertions that the HRP has indeed changed its ways, that it has abandoned its isolating policies of the past and is now actively attracting and organizing large numbers of people in Ann Arbor.

But unfortunately, present reality and many of David's own arguments belie these assertions. If HRP now encompasses a wide spectrum of the community, its candidates certainly do not reflect that expanded composition. They are not new to HRP, and are the very people who led the party into last spring's fiasco, which elected Republicans.

The argument that the Democrats are responsible for the present Republican majority on Council is further indication that the HRP refuses to deal with its past mistakes. The Democrats will continue to use the vote splitting argument as a tool to siphon off progressive support as long as the HRP clings to it's purely academic position that "Democrats and Republicans are all the same." History has proven that the Democrats, as a party, are unprincipled opportunists who will seize any issue and use any tool in order to maintain the present status quo. The responsibility then, rests with the HRP to take a truly "principled position" and accept fully the consequences of their actions. At this time, this would mean not running candidates in races where the danger of vote splitting exists.

That the HRP would put forth a plan of purposely electing Republicans until the Dems are so sick of reactionary rule that they will support proportional representation shows the suicidal lengths these academians will go in order to "prove" their "theories".

It is a reality that Republican rule can and has set the city back several years. If the HRP would not run in the 4th ward and Mayor's race, the vote splitting argu-

continued on next page

ment used by the Dems would no longer hold water. It is only in those two races that the vote splitting danger exists. If the HRP would not run in those wards the voters could have more trust that HRP responsibly represents them.

The HRP should not confuse a long-range strategy of opposing big monied, capitalist controlled parties with the immediate tactics of opposing the rabid Republican rule we presently live under. Just because you oppose all Dems in the long term point of view does not mean that you should ignore obviously disastrous consequences on an immediate tactical level and run against them in all cases.

The best strategy would be to isolate the Republican Party now as a party of, for and by business interests, and to undermine the Democratic Party over the long run by building a strong, independent third party based at first on support in the first and second wards and in tune with the larger community.

Margo Nichols cannot win, and that they are merely offering the voters a "principled" choice. However, they also admit that they are seeking as many votes in the 4th ward as possible in order to get as large a share of the rent control commission votes as possible. They would risk the election of Clyde Colburn, the Repub's candidate for Mayor in '74, in order to gamble for more votes on the rent control commission.

If Colburn were defeated this year in the fourth ward, and if the Repubs lost the 4th ward and mayor's race next year, City Council would once again have a progressive majority of 7 HRPers and Dems. But in order for that to happen the HRP would have to take a principled stand and withdraw from those races completely. Any other action will bring forth once again, unnecessarily two more years of Republican rule. If the HRP continues to feel that the Dems are as bad as the Repubs, it is obvious that they are looking only at their textbooks, and not at the reality in front of their eyes.