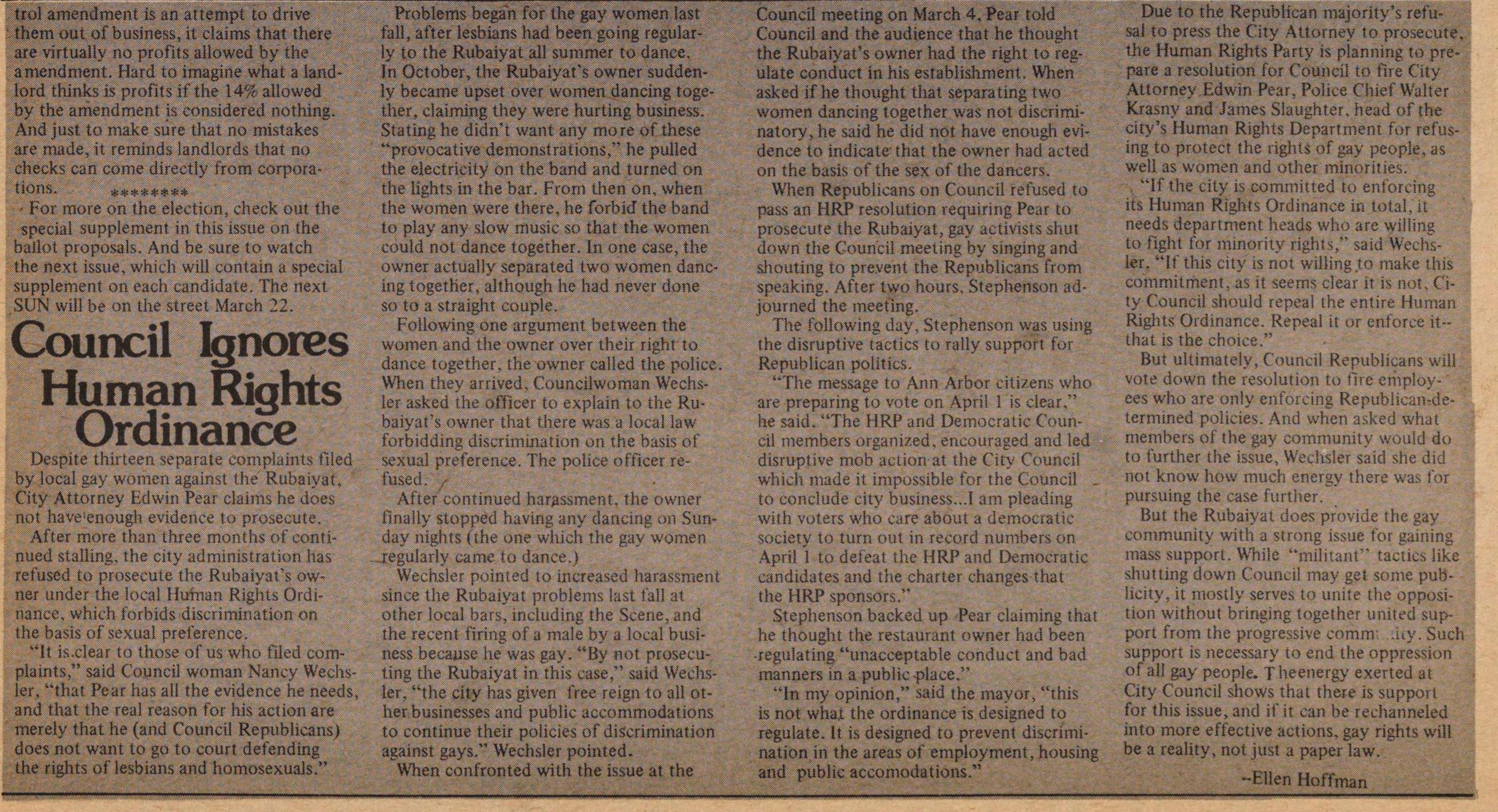 Despite thirteen separate complaints filed by local gay women against the Rubaiyat. City Attorney Edwin Pear claims he does not have'enough evidence to prosecute. After more than thiee months of continued stalling, the city administration has refused to prosecute the Rubaiyat's owner under the local Huirían Rights Ordinance, which forbids discrimination on the basis of sexual preference. "It is.clear to those of us who füed compiaints," said Council woman Nancy Wechsler, "that Pear has all the evidence he needs, and that the real reason for his act ion are merely that he (and Council Repubiicans) does not want to go to court defending the rights of lesbians and homosexuals." troöierns oegan ror me gay women last fall, after lesbians had been going regularly to the Rubaiyat all summer to dance. In October, the Rubaiyaf s owner suddenly became upset over women dancing together, claiming they were hurting business. Stating he didn't want any more of these "provocative demonstrations," he pulled the electricity on the band and turned on the lights in the bar. From then on, when the women were there, he forbid the band to play any slow music so that the women could not dance together. In one case, the owner actually separated two women dancing together, although he had never done so to a straight couple. Foilowing one argument between the women and the owner over their right to dance together, the owner called the pólice. When they arrived, Councilwoman Wechsler asked the ofïlcer to explain to the Rubaiyat's owner that there was a local law forbidding discrimination on the basis of sexual preference. The pólice officer refused . After continuad harassment, the owner finally stopped having any dancing on Sunday nights (the one which the gay women jregularly carne to dance.) Wechsler pointed to increased harassment since the Rubaiyat problems last fall at other local bars, including the Scène, and the recent firing of a male by a local business because he was gay. "By not prosecuting the Rubaiyat in this case," said Wechsler, "the city has given free reign to all other businesses and public accommodations to continue their policies of discrimination against gays." Wechsler pointed. When confronted with the issue at the Council meeting on March 4, Pear told Council and the audience that he thought the Rubaiyat's owner had the right to regúlate conduct in his establishment. When asked if he thought that separa ting two women dancing together was not discriminatory, he said he did not have enough evidence to indícate that the owner had acted on the basis of the sex of the daneers. When Republicans on Council refused to pass an HRP resolution requiring Pear to prosecute the Rubaiyat, gay activists shut down the Council meeting by singing and shouting to prevent the Republicans from speaking. After two hours. Stephenson adjourned the meeting. The following day. Stephenson was using the disruptive tactics to rally support for Republican politics. "The message to Ann Arbor citizens who are preparing to vote on April 1 is clear," he said. "The HRP and Democratie Council members organized. encouraged and led disruptive mob aetion at the City Council which made it impossible for the Council . to conclude city business...! am pleading with voters who care about a democratie society to turn out in record numbers on April 1 to defeat the HRP and Democratie candidates and the charter changes that the HRP sponsors." Stephenson backed up Pear claiming that he thought the restaurant owner had been regulating "unacceptable conduct and bad manners in a public place." "In my opinión," said the mayor, "this is not whai the ordinance is designed to regúlate. It is designed to prevent discrimination in the areas of employment, housing and public accomodations." Due to the Repubiican majority's refusai to press the City Attorney to prosecute, the Human Rights Party is planning to prepare a resolution for CounciJ to fire City Attorney Edwin Pear, Polke Chief Walter Krasny and James Slaughter. head of the city's Human Rights Department for refusing to protect the rights of gay people, as weli as women and other minorities. "If the city is committed to enforcing its Human Rights Ordinance in total, il needs department heads who are willing to fight t'or minority rights," said Wechsler. 'if this city is not willing .to make this commitment, as it seerns clear it is not. City Council should repeal the entire Human Rights Ordinance. Repeai il or enforcc itthat is the choice." But ultimately, Council Repubiicans will vote down the resolution to tlrc employees who are only enforcing Republican-determined policies. And when asked whaf members of the gay community would do to further the issue, Wechsler said she did not know how much energy there was for pursuing the case further. But the Rubaiyat does provide the gay community with a strong issue for gaining mass support. While "militant" tactics like shutting down Council may get some publicity, it ntosily serves to unite the opposition without bringing together united support from the progressive comm; ;icy. Such support is necessary to end the oppression of all gay people. fheenergy exerted at City Council shows that theje is support for this issue, and if it can be rechanneled into more effective actions.gay rights will be a reality, not just a paper iaw.