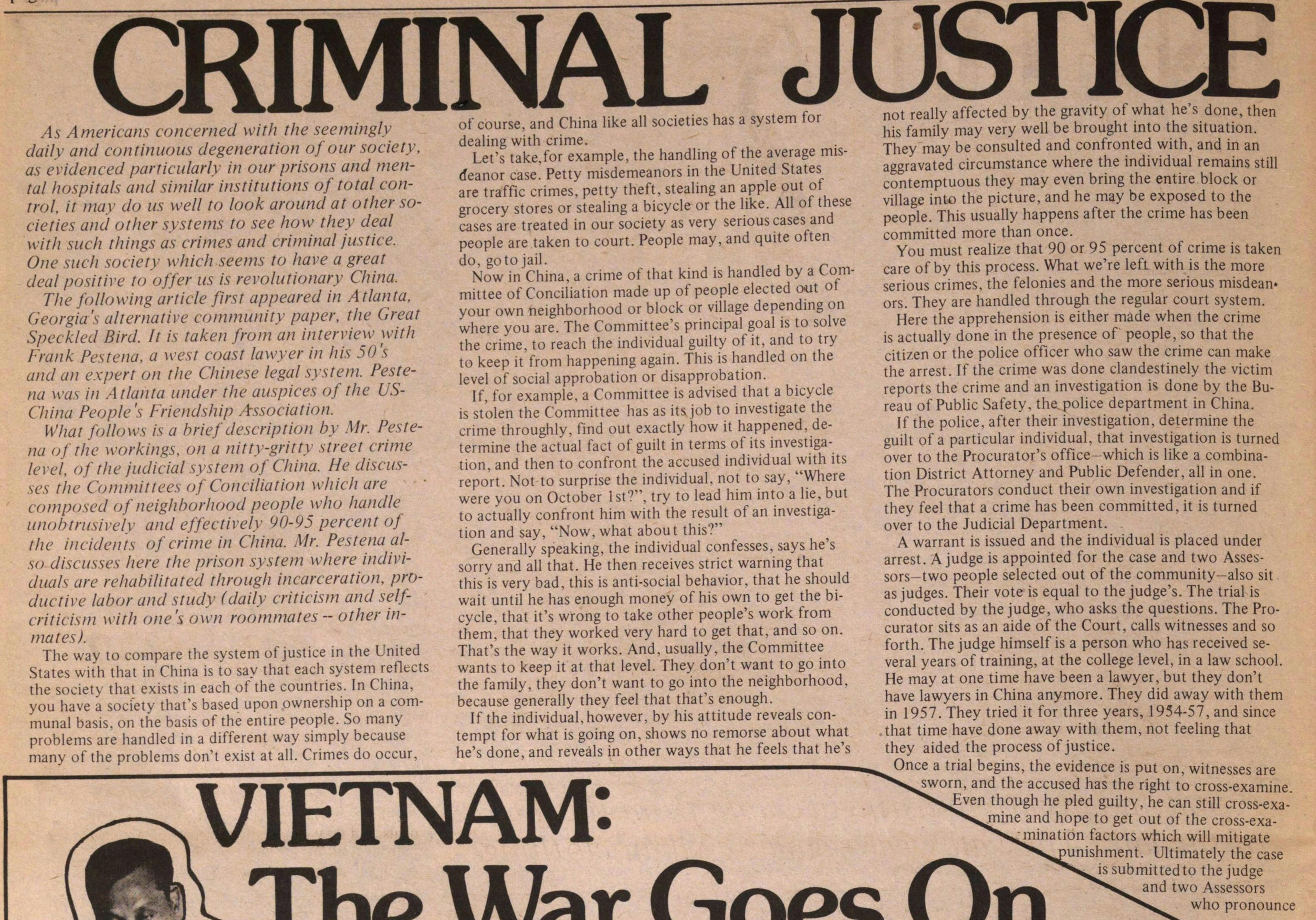 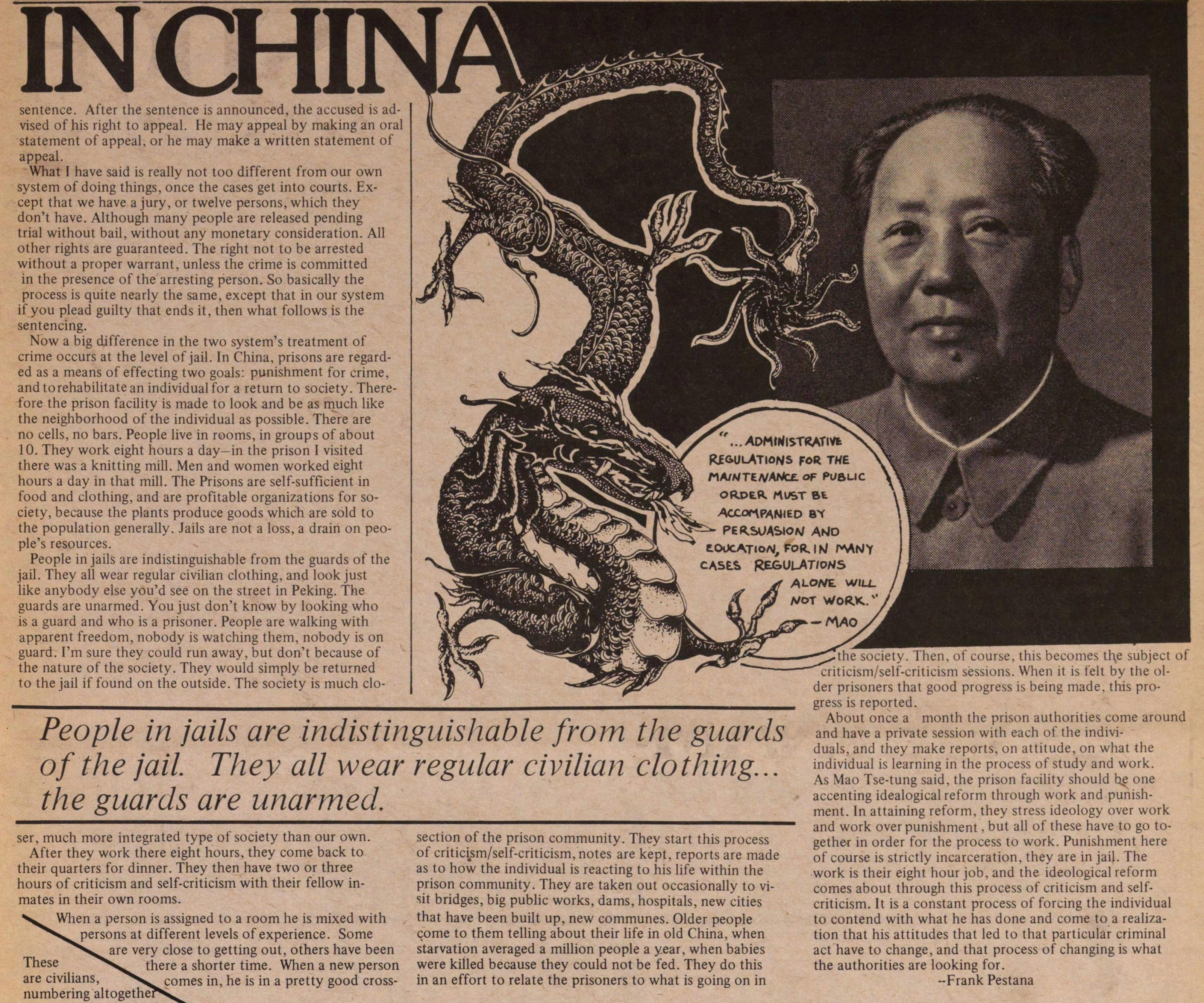 As Americans concerned with the seemingly daily and continuous degeneration of our society, as evidenced particulary in our prisons and mental hospitals and similar institutions of total control, it may do us well to look around at other societies and other systems to see how they deal with such things as crimes and criminal justice. One such society which seems to have a great deal positive to offer us is revolutionary China.

The following article first appeared in Atlanta, Georgia's alternative community paper, the Great Speckled Bird. It is taken from an interview with Frank Pestena, a west coast lawyer in his 50's and an expert on the Chinese legal system. Pestena was in Atlanta under the auspices of the US/China People's Friendship Association.

What follows is a brief description by Mr. Pestena of the workings, on a nitty-gritty street crime level, of the judicial system of China. He discusses the Committees of Conciliation which are composed of neighborhood people who handle unobtrusively and effectively 90-95 percent of the incidents of crime in China. Mr. Pestena also discusses here the prison system where individuals are rehahilitaled through incarceration, productive labor and study (daily criticism and self-criticism with one's own roommates - other inmates).

The way to compare the system of justice in the United States with that in China is to say that each system reflects the society that exists in each of the countries. In China, you have a society that's based upon ownership on a communal basis, on the basis of the entire people. So many problems are handled in a different way simply because many of the problems don't exist at all. Crimes do occur. of course, and China like all societies has a system for dealing with crime.

Let's take for example, the handling of the average misdeanor case. Petty misdemeanors in the United States are traffic crimes, petty theft, stealing an apple out of grocery stores or stealing a bicycle or the like. All of these cases are treated in our society as very serious cases and people are taken to court. People may, and quite often do, goto jail.

Now in China, a crime of that kind is handled by a Committee of Conciliation made up of people elected out of your own neighborhood or block or village depending on where you are. The Committee's principal goal is to solve the crime, to reach the individual guilty of it, and to try te keep it from happening again. This is handled on the level of social approbation or disapprobation.

If, for example, a Committee is advised that a bicycle is stolen the Committee has as its job to investigate the crime throughly, find out exactly how it happened, determine the actual fact of guilt in terms of its investigation and then to confront the accused individual with its report. Not to surprise the individual, not to say, "Where were you on October 1st?", try to lead him into a lie, but to actually confront him with the result of an investigation and say, "Now, what about this?"

Generally speaking, the individual confesses, says he's sorry and all that. He then receives strict warning that this is very bad, this is anti-social behavior, that he should wait until he has enough money of his own to get the bicycle, that it's wrong to take other people's work from them, that they worked very hard to get that, and so on. That's the way it works. And, usually, the Committee wants to keep it at that level. They don't want to go into the family, they don't want to go into the neighborhood, because generally they feel that that's enough.

If the individual, however, by his attitude reveals contempt for what is going on, shows no remorse about what he's done, and reveals in other ways that he feels that he's not really affected by the gravity of what he's done, then his family may very well be brought into the situation. They may be consulted and confronted with, and in an aggravated circumstance where the individual remains still contemptuous they may even bring the entire block or village into the picture, and he may be exposed to the people. This usually happens after the crime has been committed more than once.

You must realize that 90 or 95 percent of crime is taken care of by this process. What we're left with is the more serious crimes, the felonies and the more serious misdemranors. They are handled through the regular court system.

Here the apprehension is either made when the crime is actually done in the presence of people, so that the citizen or the police officer who saw the crime can make the arrest. If the crime was done clandestinely the victim reports the crime and an investigation is done by the Bureau of Public Safety, the, police department in China.

A warrant is issued and the individual is placed under arrest. A judge is appointed for the case and two Assessors- two people selected out of the community- also sit as judges. Their vote is equal to the judge's. The trial is conducted by the judge, who asks the questions. The Procurator sits as an aide of the Court, calls witnesses and so forth. The judge himself is a person who has received several years of training, at the college level, in a law school. He may at one time have been a lawyer, but they don't have lawyers in China anymore. They did away with them in 1957. They tried it for three years, 1954-57, and since that time have done away with them, not feeling that they aided the process of justice.

Once a trial begins, the evidence is put on, witnesses are sworn, and the accused has the right to cross-examine. Even though he pled guilty, he can still mine and hope to get out of the cross-exainination factors which will mitigate punishment. Ultimately the case is submitted to the judge and two Assessors who pronounce sentence. After the sentence is announced, the accused is advised of his right to appeal. He may appeal by making an oral statement of appeal, or he may make a written statement of appeal.

What I have said is really not too different from our own system of doing things, once the cases get into courts. Except that we have a jury, or twelve persons, which they don't have. Although many people are released pending trial without bail, without any monetary consideration. All other rights are guaranteed. The right not to be arrested without a proper warrant, unless the crime is committed in the presence of the arresting person. So basically the process is quite nearly the same, except that in our system if you plead guilty that ends it, then what follows is the sentencing.

Now a big difference in the two system's treatment of crime occurs at the level of jail. In China, prisons are regarded as a means of effecting two goals: punishment for crime, and to rehabilitate an individual for a return to society. Therefore the prison facility is made to look and be as much like the neighborhood of the individual as possible. There are no cells, no bars. People live in rooms, in groups of about 10. They work eight hours a day- in the prison I visited there was a knitting mill. Men and women worked eight hours a day in that mili. The Prisons are self-sufficient in food and clothing, and are profitable organizations for society, because the plants produce goods which are sold to the population generally. Jails are not a loss, a drain on people's resources.

People in jails are indistinguishable from the guards of the jail. They all wear regular civilian clothing, and look just like anybody else you'd see on the street in Peking. The guards are unarmed. You just don't know by looking who is a guard and who is a prisoner. People are walking with apparent freedom, nobody is watching them, nobody is on guard. I'm sure they could run away, but don't because of the nature of the society. They would simply be returned to the jail if found on the outside. The society is much closer, much more integrated type of society than our own.

After they work there eight hours, they come back to their quarters for dinner. They then have two or three hours of criticism and self-criticism with their fellow inmates in their own rooms.

When a person is assigned to a room he is mixed with persons at different levels of experience. Some are very close to getting out, others have been there a shorter time. When a new person comes in, he is in a pretty good section of the prison community. They start this process of criticism/self-criticism, notes are kept, reports are made as to how the individual is reacting to his life within the prison community. They are taken out occasionally to visit bridges, big public works, dams, hospitals, new cities that have been built up, new communes. Older people come to them telling about their life in old China, when starvation averaged a million people a year, when babies were killed because they could not be fed. They do this in an effort to relate the prisoners to what is going on in the society. Then, of course, this becomes the subject of criticism/self-criticism sessions. When it is felt by the older prisoners that good progress is being made, this progress is reported.

About once a month the prison authorities come around and have a private session with each of the individuals, and they make reports, on attitude, on what the individual is learning in the process of study and work. As Mao Tse-tung said, the prison facility should he one accenting idealogical reform through work and punishment. In attaining reform, they stress ideology over work and work over punishment , but all of these have to go together in order for the process to work. Punishment here of course is strictly incarceration, they are in jail. The work is their eight hour job, and the ideological reform comes about through this process of criticism and self-criticism. It is a constant process of forcing the individual to contend with what he has done and come to a realization that his attitudes that led to that particular criminal act have to change, and that process of changing is what the authorities are looking for. People in jails are indistinguishable from the guards of the jail. They all wear regular civilian clothing. . . the guards are unarmed.