Fallout On The Freeway 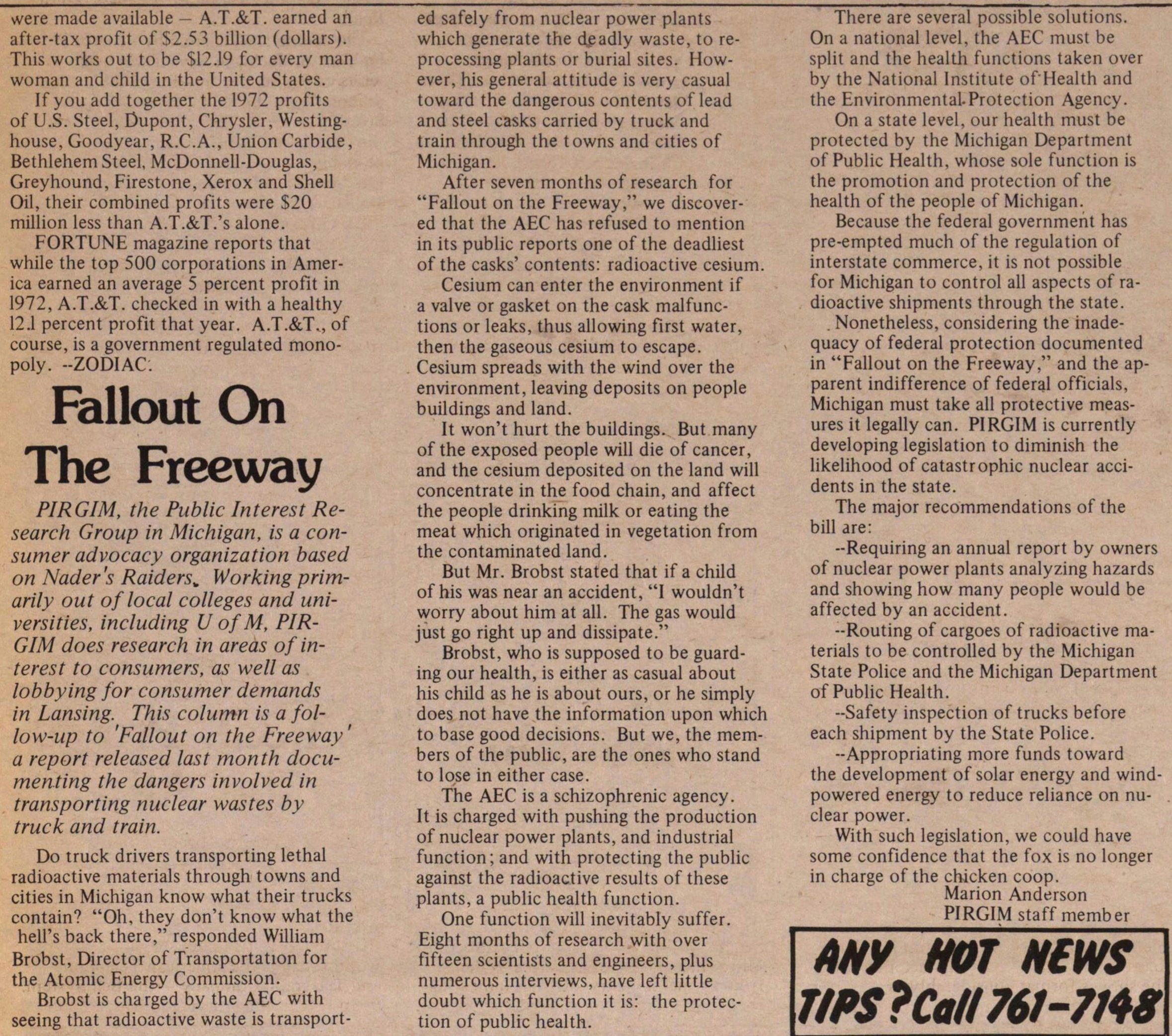 PIRGIM, the Public Interest Research Group in Michigan, is a consumer advocacy organization based on Nader's Raiders Working primarily out of local colleges and universities, including U of M, PIRGIM does research in areas of interest to consumers, as well as lobbying for consumer demands in Lansing. This column is a follow-up to 'Fallout on the Freeway' a report released last month documenting the dangers involved in transporting nuclear wastes by truck and train.

Do truck drivers transporting lethal radioactive materials through towns and cities in Michigan know what their trucks contain? "Oh. they don't know what the hell's back there," responded William Brobst, Director of Transportation for the Atomic Energy Commission.

Brobst is charged by the AEC with seeing that radioactive waste is transported safely from nuclear power plants which generate the deadly waste, to reprocessing plants or burial sites. However, his general attitude is very casual toward the dangerous contents of lead and steel casks carried by truck and train through the towns and cities of Michigan.

After seven months of research for "Fallout on the Freeway," we discovered that the AEC has refused to mention in its public reports one of the deadliest of the casks' contents: radioactive cesium.
Cesium can enter the environment if a valve or gasket on the cask malfunctions or leaks, thus allowing first water, then the gaseous cesium to escape. Cesium spreads with the wind over the environment, leaving deposits on people buildings and land.
It won't hurt the buildings. But many of the exposed people will die of cancer, and the cesium deposited on the land will concentrate in the food chain, and affect the people drinking milk or eating the meat which originated in vegetation from the contaminated land.
But Mr. Brobst stated that if a child of his was near an accident, "I wouldn't worry about him at all. The gas would just go right up and dissipate."
Brobst, who is supposed to be guarding our health, is either as casual about his child as he is about ours, or he simply does not have the information upon which to base good decisions. But we, the members of the public, are the ones who stand to lose in either case.
The AEC is a schizophrenic agency. It is charged with pushing the production of nuclear power plants, and industrial function; and with protecting the public against the radioactive results of these plants, a public health function.
One function will inevitably suffer. Eight months of research with over fifteen scientists and engineers, plus numerous interviews, have left little doubt which function it is: the protection of public health.
There are several possible solutions. On a national level, the AEC must be split and the health functions taken over by the National Institute of Health and the Environmental Protection Agency.
On a state level, our health must be protected by the Michigan Department of Public Health, whose sole function is the promotion and protection of the health of the people of Michigan.
Because the federal government has pre-empted much of the regulation of interstate commerce, it is not possible for Michigan to control all aspects of radioactive shipments through the state.
Nonetheless, considering the inadequacy of federal protection documented in "Fallout on the Freeway," and the apparent indifference of federal officials, Michigan must take all protective measures it legally can. PIRGIM is currently developing legislation to diminish the likelihood of catastrophic nuclear accidents in the state.
The major recommendations of the bill are:
--Requiring an annual report by owners of nuclear power plants analyzing hazards and showing how many people would be affected by an accident.
--Routing of cargoes of radioactive materials to be controlled by the Michigan State Police and the Michigan Department of Public Health.
-Safety inspection of trucks before each shipment by the State Police.
-Appropriating more funds toward the development of solar energy and wind-powered energy to reduce reliance on nuclear power.
With such legislation, we could have some confidence that the fox is no longer in charge of the chicken coop.