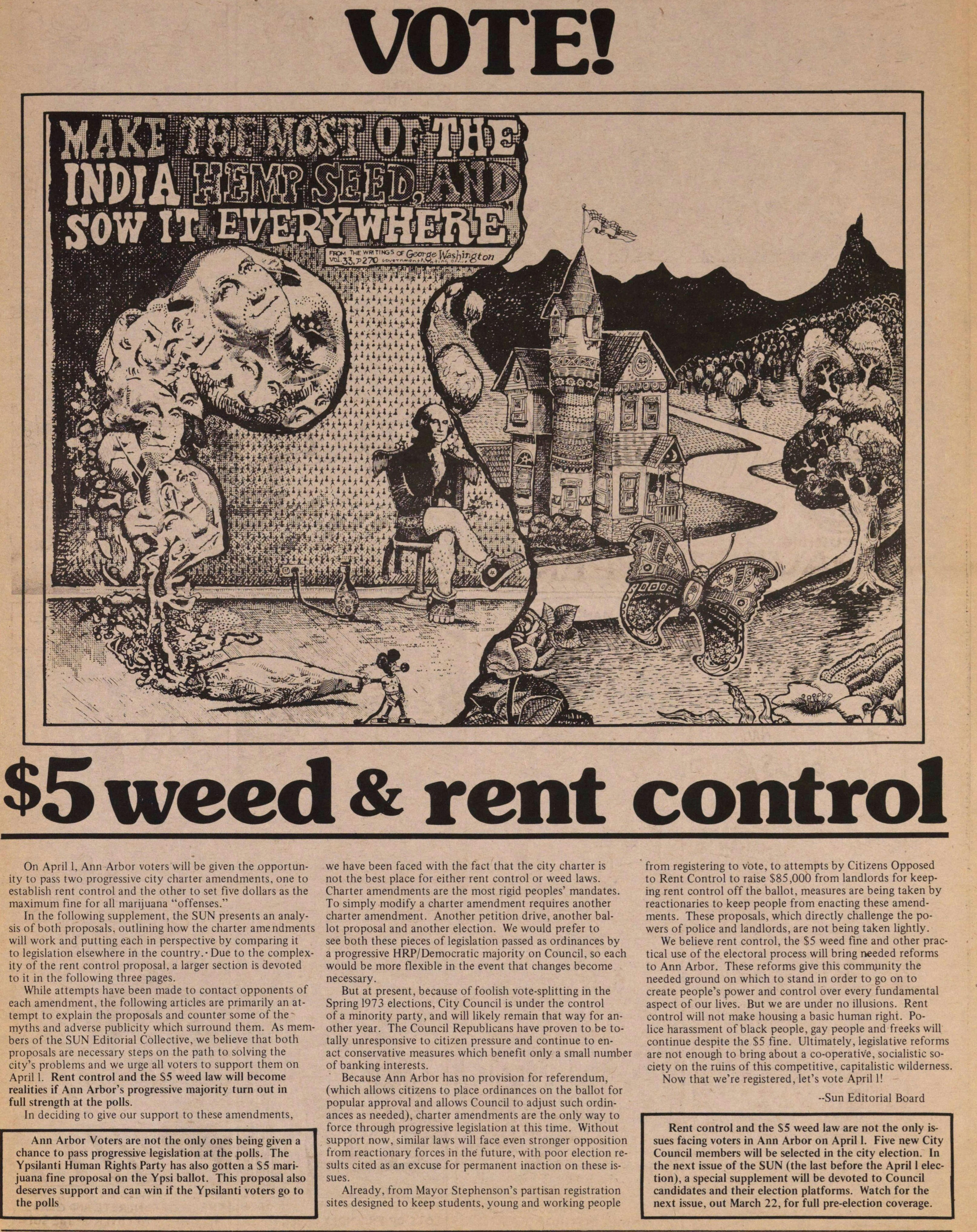 On April 1, Ann Arbor voters will be given the opportunity to pass two progressive city charter amendments, one to establish rent control and the other to set five dollars as the maximum fine for all marijuana "offenses."
In the following supplement, the SUN presents an analysis of both proposals, outlining how the charter amendments will work and putting each in perspective by comparing it to legislation elsewhere in the country. Due to the complexity of the rent control proposal, a larger section is devoted to it in the following three pages.
While attempts have been made to contact opponents of each amendment, the following articles are primarily an attempt to explain the proposals and counter some of the myths and adverse publicity which surround them. As members of the SUN Editorial Collective, we believe that both proposals are necessary steps on the path to solving the city's problems and we urge all voters to support them on April 1.
Rent control and the $5 weed law will become realities if Ann Arbor's progressive majority turn out in full strength at the polls.
In deciding to give our support to these amendments, we have been faced with the fact that the city charter is not the best place for either rent control or weed laws. Charter amendments are the most rigid peoples' mandates. To simply modify a charter amendment requires another charter amendment. Another petition drive, another ballot proposal and another election. We would prefer to see both these pieces of legislation passed as ordinances by a progressive HRP/Democratic majority on Council, so each would be more flexible in the event that changes become necessary.
But at present, because of foolish vote-splitting in the Spring 1973 elections, City Council is under the control of a minority party, and will likely remain that way for another year. The Council Republicans have proven to be totally unresponsive to citizen pressure and continue to enact conservative measures which benefit only a small number of banking interests.
Because Ann Arbor has no provision for referendum, (which allows citizens to place ordinances on the ballot for popular approval and allows Council to adjust such ordinances as needed), charter amendments are the only way to force through progressive legislation at this time. Without support now, similar laws will face even stronger opposition from reactionary forces in the future, with poor election results cited as an excuse for permanent inaction on these issues.
Already, from Mayor Stephenson's partisan registration sites designed to keep students, young and working people from registering to vote, to attempts by Citizens Opposed to Rent Control to raise $85,000 from landlords for keeping rent control off the ballot, measures are being taken by reactionaries to keep people from enacting these amendments. These proposals, which directly challenge the powers of police and landlords, are not being taken lightly.
We believe rent control, the $5 weed fine and other practical use of the electoral process will bring needed reforms to Ann Arbor. These reforms give this community the needed ground on which to stand in order to go on to create people's power and control over every fundamental aspect of our lives. But we are under no illusions. Rent control will not make housing a basic human right. Police harassment of black people, gay people and freeks will continue despite the $5 fine. Ultimately, legislative reforms are not enough to bring about a co-operative, socialistic society on the ruins of this competitive, capitalistic wilderness. Now that we're registered, let's vote April 1!

Ann Arbor Voters are not the only ones being given a chance to pass progressive legislation at the polls. The Ypsilanti Human Rights Party has also gotten a $5 marijuana fine proposal on the Ypsi ballot. This proposal also deserves support and can win if the Ypsilanti voters go to the polls

Rent control and the $5 weed law are not the only issues facing voters in Ann Arbor on April 1. Five new City Council members will be selected in the city election. In the next issue of the SUN (the last before the April 1 election), a special supplement will be devoted to Council candidates and their election platforms. Watch for the next issue, out March 22, for full pre-election coverage.