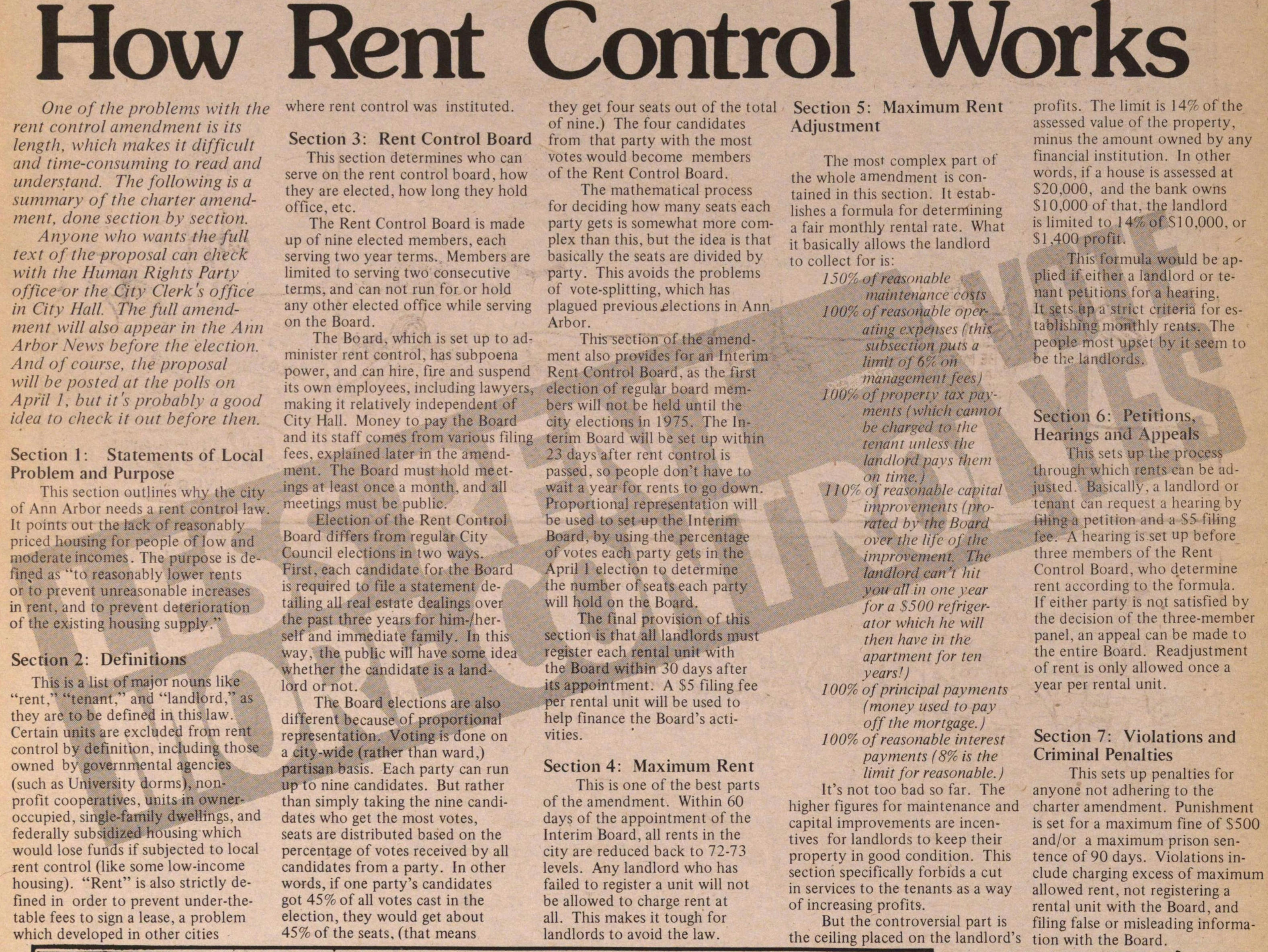 One of the problems with the rent control amendment is its length, which makes it difficult and time-consuming to read and understand. The following is a summary of the charter amendment, done section by section.

Anyone who wants the full text of the proposal can check with the Human Rights Party office or the City Clerk's office in City Hall. The full amendment will also appear in the Ann Arbor News before the election. And of course, the proposal will be posted at the polls on April 1, but it's probably a good idea to check it out before then.

This section outlines why the city of Ann Arbor needs a rent control law. It points out the lack of reasonably priced housing for people of low and moderate incomes. The purpose is defined as "to reasonably lower rents or to prevent unreasonable increases in rent, and to prevent deterioration of the existing housing supply."

This is a list of major nouns like "rent," "tenant," and "landlord," as they are to be defined in this law. Certain units are excluded from rent control by definition, including those owned by governmental agencies (such as University dorms), non-profit cooperatives, units, in owner-occupied, single-family dwellings, and federally subsidized housing which would lose funds if subjected to local rent control (like some low-income housing). "Rent" is also strictly defined in order to prevent under-the-table fees to sign a lease, a problem which developed in other cities where rent control was instituted.

This section determines who can serve on the rent control board, how they are elected, how long they hold office, etc.

The Rent Control Board is made up of nine elected members, each serving two year terms. Members are limited to serving two consecutive terms. and can not run for or hold any other elected office while serving on the Board.

The Board, which is set up to administer rent control, has subpoena power, and can hire, fire and suspend its own employees, including lawyers, making it relatively independent of City Hall. Money to pay the Board and its staff comes from various filing fees. explained later in the amendment. The Board must hold meetings at least once a month. and all meetings must be public.

Election of the Rent Control Board differs from regular City Council elections in two ways. First, each candidate for the Board is required to file a statement detailing all real estate dealings over the past three years for him-/herself and immediate family. In this way, the public will have some idea whether the candidate is a landlord or not.

The Board elections are also different because of proportional representation. Voting is done on a city-wide (rather than ward,) partisan basis. Each party can run up to nine candidates. But rather than simply taking the nine candidates who get the most votes, seats are distributed based on the percentage of votes received by all candidates from a party. In other words, if one party's candidates got 45% of all votes cast in the election, they would get about 45% of the seats, (that means they get four seats out of the total of nine.) The four candidates from that party with the most votes would become members of the Rent Control Board.

The mathematical process for deciding how many seats each party gets is somewhat more complex than this, but the idea is that basically the seats are divided by party. This avoids the problems of vote-splitting, which has plagued previous elections in Ann Arbor.

This section of the amendment also provides tor an Interim Rent Control Board, as the first, election of regular board members will not be held until the city elections 1975. The Interim Board will be set up within 23 days after rent control is passed, so people don't have to wait a year for rents to go down. Proportional representation will be used to set up the Interim Board, by using the percentage of votes each party gets in the April 1 election to determine the number of seats each party will hold on the Board.

The final provision of this section is that all landlords must register each rental unit with the Board within 30 days after its appointment. A $5 filing fee per rental unit will be used to help finance the Board's activities.

This is one of the best parts of the amendment. Within 60 days of the appointment of the Interim Board, all rents in the city are reduced back to 72-73 levels. Any landlord who has failed to register a unit will not be allowed to charge rent at all. This makes it tough for landlords to avoid the law.

The most complex part of the whole amendment is contained in this section. It establishes a formula for determining a fair monthly rental rate. What it basically allows the landlord to collect for is:

100% of property tax payments (which cannot be charged to the tenant unless the landlord pays them on time.)

110% of reasonable capital improvements (protracted by the Board over the life of the improvement. The landlord can't hit you all in one year for a $500 refrigerator which he will then have in the apartment for ten years!)

100% of principal payments (money used to pay off the mortgage.)

100% of reasonable interest payments (8% is the limit for reasonable.)

It's not too bad so far. The higher figures for maintenance and capital improvements are incentives for landlords to keep their property in good condition. This section specifically forbids a cut in services to the tenants as a way of increasing profits.

But the controversial part is the ceiling placed on the landlord's profits. The limit is 14% of the assessed value of the property, minus the amount owned by any financial institution. In other words, if a house is assessed at $20,000, and the bank owns $I0,000 of that, the landlord is limited to 14% of $I0,000, or $1,400 profit.

This formula would be applied if either a landlord or tenant petitions for a hearing. It sets up a strict criteria for establishing monthly rents. The people most upset by it seem to be the landlords.

This sets up the process through which rents can be adjusted. Basically, a landlord or tenant can request a hearing by filing a petition and a $5 filing fee. A hearing is set up before three members of the Rent Control Board, who determine rent according to the formula. If either party is not satisfied by the decision of the three-member panel, an appeal can be made to the entire Board. Readjustment of rent is only allowed once a year per rental unit.

This sets up penalties for anyone not adhering to the charter amendment. Punishment is set for a maximum fine of $500 and/or a maximum prison sentence of 90 days. Violations include charging excess of maximum allowed rent, not registering a rental unit with the Board, and filing false or misleading information with the Board.