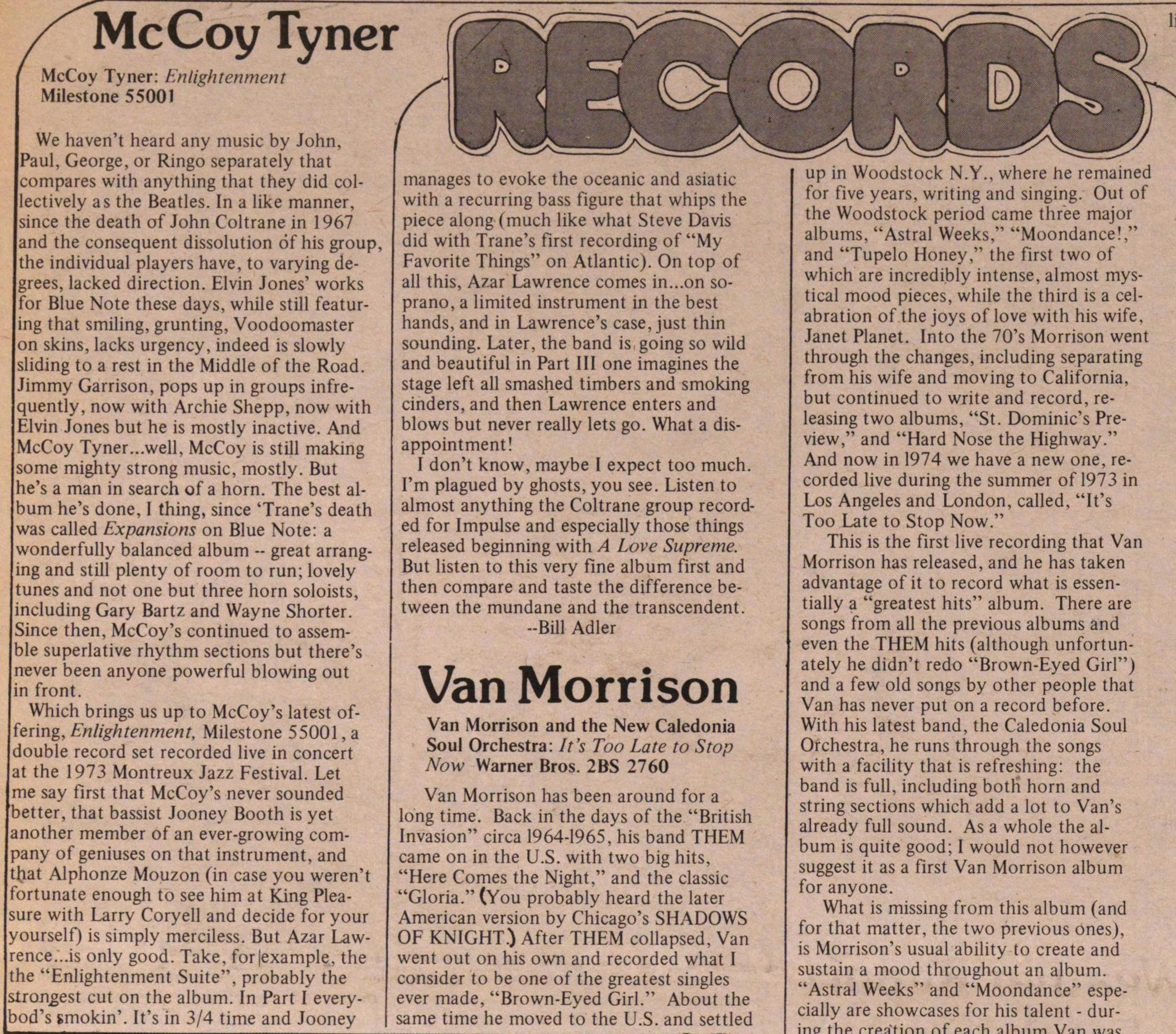 We haven't heard any music by John, Paul, George, or Ringo separately that compares with anything that they did collectively as the Beatles. In a like manner, since the death of John Coltrane in 1967 and the consequent dissolution of his group, the individual players have, to varying degrees, lacked direction. Elvin Jones' works for Blue Note these days, while still featuring that smiling, grunting, Voodoomaster on skins, lacks urgency, indeed is slowly sliding to a rest in the Middle of the Road. Jimmy Garrison, pops up in groups infrequently, now with Archie Shepp, now with Elvin Jones but he is mostly inactive. And McCoy Tyner. ..well, McCoy is still making some mighty strong music, mostly. But he's a man in search of a horn. The best album he's done, I thing, since 'Trane's death was called Expansions on Blue Note: a wonderfully balanced album -- great arranging and still plenty of room to run; lovely tunes and not one but three horn soloists, including Gary Bartz and Wayne Shorter. Since then, McCoy's continued to assemble superlative rhythm sections but there's never been anyone powerful blowing out in front.

Which brings us up to McCoy's latest offering, Enlightenment, Milestone 55001, a double record set recorded live in concert at the 1973 Montreux Jazz Festival. Let me say first that McCoy's never sounded better, that bassist Jooney Booth is yet another member of an ever-growing company of geniuses on that instrument, and that Alphonze Mouzon (in case you weren't fortunate enough to see him at King Pleasure with Larry Coryell and decide for your yourself) is simply merciless. But Azar Lawrence...is only good. Take, for example, the the "Enlightenment Suite", probably the strongest cut on the album. In Part I I everybod's smokin'. It's in 3/4 time and Jooney manages to evoke the oceanic and asiatic with a recurring bass figure that whips the piece along (much like what Steve Davis did with Trane's first recording of "My Favorite Things" on Atlantic). On top of all this, Azar Lawrence comes in...on soprano, a limited instrument in the best hands, and in Lawrence's case, just thin sounding. Later, the band is going so wild and beautiful in Part III one imagines the stage left all smashed timbers and smoking cinders, and then Lawrence enters and blows but never really Iets go. What a disappointment!

I don't know, maybe I expect too much. I'm plagued by ghosts, you see. Listen to almost anything the Coltrane group recorded for Impulse and especially those things released beginning with A Love Supreme. But listen to this very fine album first and then compare and taste the difference between the mundane and the transcendent.