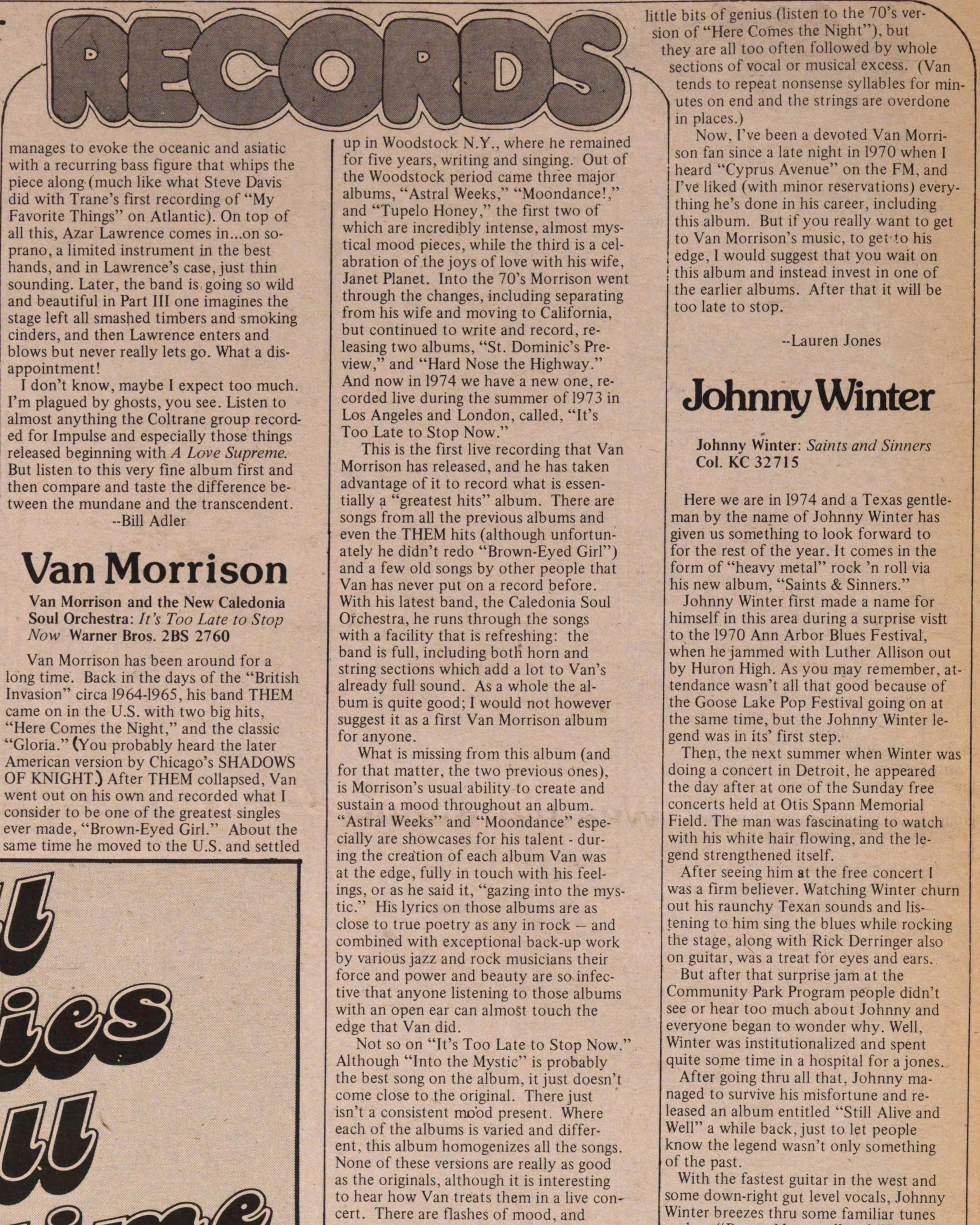 Van Morrison has been around for a long time. Back in the days of the "British Invasion" circa 1964-1965, his band THEM came on in the U.S. with two big hits, "Here Comes the Night," and the classic "Gloria." (You probably heard the later American version by Chicago's SHADOWS OF KNIGHT.) After THEM collapsed, Van went out on his own and recorded what I consider to be one of the greatest singles ever made, "Brown-Eyed Girl." About the same time he moved to the U.S. and settled " settled up in Woodstock N.Y., where he remained for five years, writing and singing. Out of the Woodstock period came three major albums, "Astral Weeks," "Moondance!," and "Tupelo Honey," the first two of which are incredibly intense, almost mystical mood pieces, while the third is a celabration of the joys of love with his wife, Janet Planet. Into the 70's Morrison went through the changes, including separating from his wife and moving to California, but continued to write and record, releasing two albums, "St. Dominic's Preview," and "Hard Nose the Highway." And now in 1974 we have a new one, recorded live during the summer of 1973 in Los Angeles and London, called, "It's Too Late to Stop Now."

This is the first live recording that Van Morrison has released, and he has taken advantage of it to record what is essentially a "greatest hits" album. There are songs from all the previous albums and even the THEM hits (although unfortunately he didn't redo "Brown-Eyed Girl") and a few old songs by other people that Van has never put on a record before. With his latest band, the Caledonia Soul Orchestra, he runs through the songs with a facility that is refreshing: the band is full, including both horn and string sections which add a lot to Van's already full sound. As a whole the album is quite good; I would not however suggest it as a first Van Morrison album for anyone.

What is missing from this album (and for that matter, the two previous ones), is Morrison's usual ability to create and sustain a mood throughout an album. "Astral Weeks" and "Moondance" especially are showcases for his talent - during the creation of each album Van was at the edge, fully in touch with his feelings, or as he said it, "gazing into the mystic." His lyrics on those albums are as close to true poetry as any in rock - and combined with exceptional back-up work by various jazz and rock musicians their force and power and beauty are so infective that anyone listening to those albums with an open ear can almost touch the edge that Van did.

Not so on "It's Too Late to Stop Now." Although "Into the Mystic" is probably the best song on the album, it just doesn't come close to the original. There just isn't a consistent mood present. Where each of the albums is varied and different, this album homogenizes all the songs. None of these versions are really as good as the originals, although it is interesting to hear how Van treats them in a live concert. There are flashes of mood, and little bits of genius (listen to the 70's version of "Here Comes the Night"), but they are all too often followed by whole sections of vocal or musical excess. (Van tends to repeat nonsense syllables for minutes on end and the strings are overdone in places)

Now, I've been a devoted Van Monison fan since a late night in 1970 when I heard "Cyprus Avenue" on the FM, and I've liked (with minor reservations) everything he's done in his career, including this album. But if you really want to get to Van Morrison's music, to get to his edge, I would suggest that you wait on this album and instead invest in one of the earlier albums. After that it will be too late to stop.