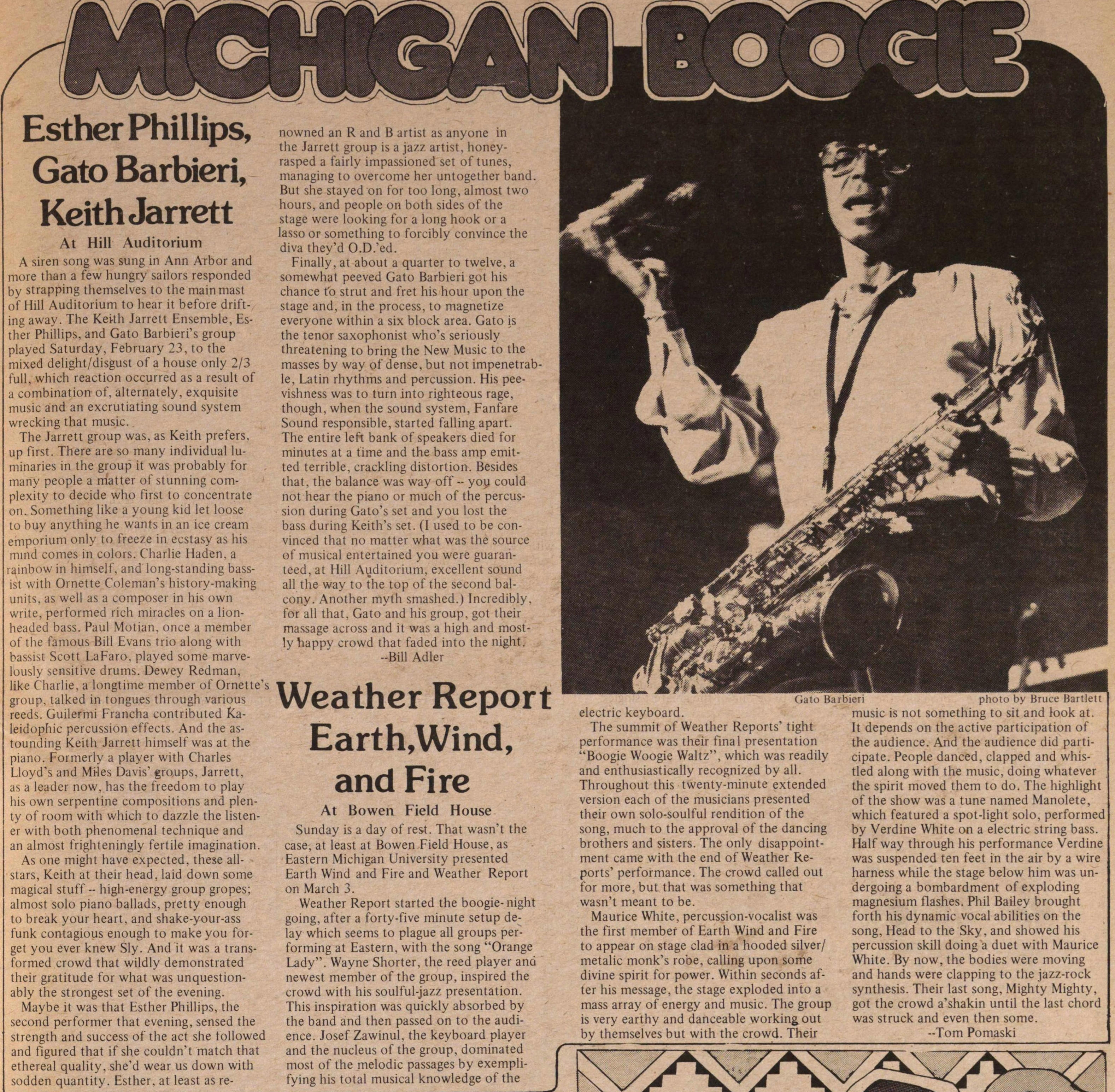 A siren song was sung in Ann Arbor and more than a few hungry sailors responded by strapping themselves to the main mast of Hill Auditorium to hear it before drifting away. The Keith Jarrett Ensemble, Esther Phillips, and Gato Barbieri's group played Saturday, February 23, to the mixed delight/disgust of a house only 2/3 full, which reaction occurred as a result of a combination of, alternately, exquisite music and an excruciating sound system wrecking that music.

The Jarrett group was, as Keith prefers. up first. There are so many individual luminaries in the group it was probably for many people a matter of stunning complexity to decide who first to concentrate on. Something like a young kid let loose to buy anything he wants in an ice cream emporium only to freeze in ecstasy as his mind comes in colors. Charlie Haden, a rainbow in himself. and long-standing bassist with Ornette Coleman's history-making units, as well as a composer in his own write, performed rich miracles on a lion-headed bass. Paul Motian. once a member of the famous Bill Evans trio along with bassist Scott LaFaro, played some marvelously sensitive drums. Dewey Redman, like Charlie, a longtime member of Ornette's group, talked in tongues through various reeds. Guilermi Francha contributed Kaleidophic percussion effects. And the astounding Keith Jarrett himself was at the piano. Formerly a player with Charles Lloyd's and Miles Davis' groups, Jarrett, as a leader now, has the freedom to play his own serpentine compositions and plenty of room with which to dazzle the listener with both phenomenal technique and an almost frighteningly fertile imagination.

As one might have expected, these all-stars, Keith at their head, laid down some magical stuff -- high-energy group gropes; almost solo piano ballads, pretty enough to break your heart, and shake-your-ass funk contagious enough to make you forget you ever knew Sly. And it was a transformed crowd that wildly demonstrated their gratitude for what was unquestionably the strongest set of the evening.

Maybe it was that Esther Phillips, the second performer that evening, sensed the strength and success of the act she followed and figured that if she couldn't match that ethereal quality, she'd wear us down with sodden quantity. Esther, at least as renowned an R and B artist as anyone in the Jarrett group is a jazz artist, honey-rasped a fairly impassioned set of tunes, managing to overcome her untogether band. But she stayed on for too long, almost two hours, and people on both sides of the stage were looking for a long hook or a lasso or something to forcibly convince the diva they'd O.D.'ed.

Finally, at about a quarter to twelve, a somewhat peeved Gato Barbieri got his chance to strut and fret his hour upon the stage and in the process, to magnetize everyone within a six block area. Gato is the tenor saxophonist who's seriously threatening to bring the New Music to the masses by way of dense, but not impenetrable, Latin rhythms and percussion. His peevishness was to turn into righteous rage, though, when the sound system, Fanfare Sound responsible, started falling apart. The entire left bank of speakers died for minutes at a time and the bass amp emitted terrible, crackling distortion. Besides that, the balance was way off - you could not hear the piano or much of the percussion during Gato's set and you lost the bass during Keith's set. (I used to be convinced that no matter what was the source of musical entertained you were guaranteed, at Hill Auditorium, excellent sound all the way to the top of the second balcony. Another myth smashed.) Incredibly, for all that, Gato and his group, got their massage across and it was a high and mostly happy crowd that faded into the night.