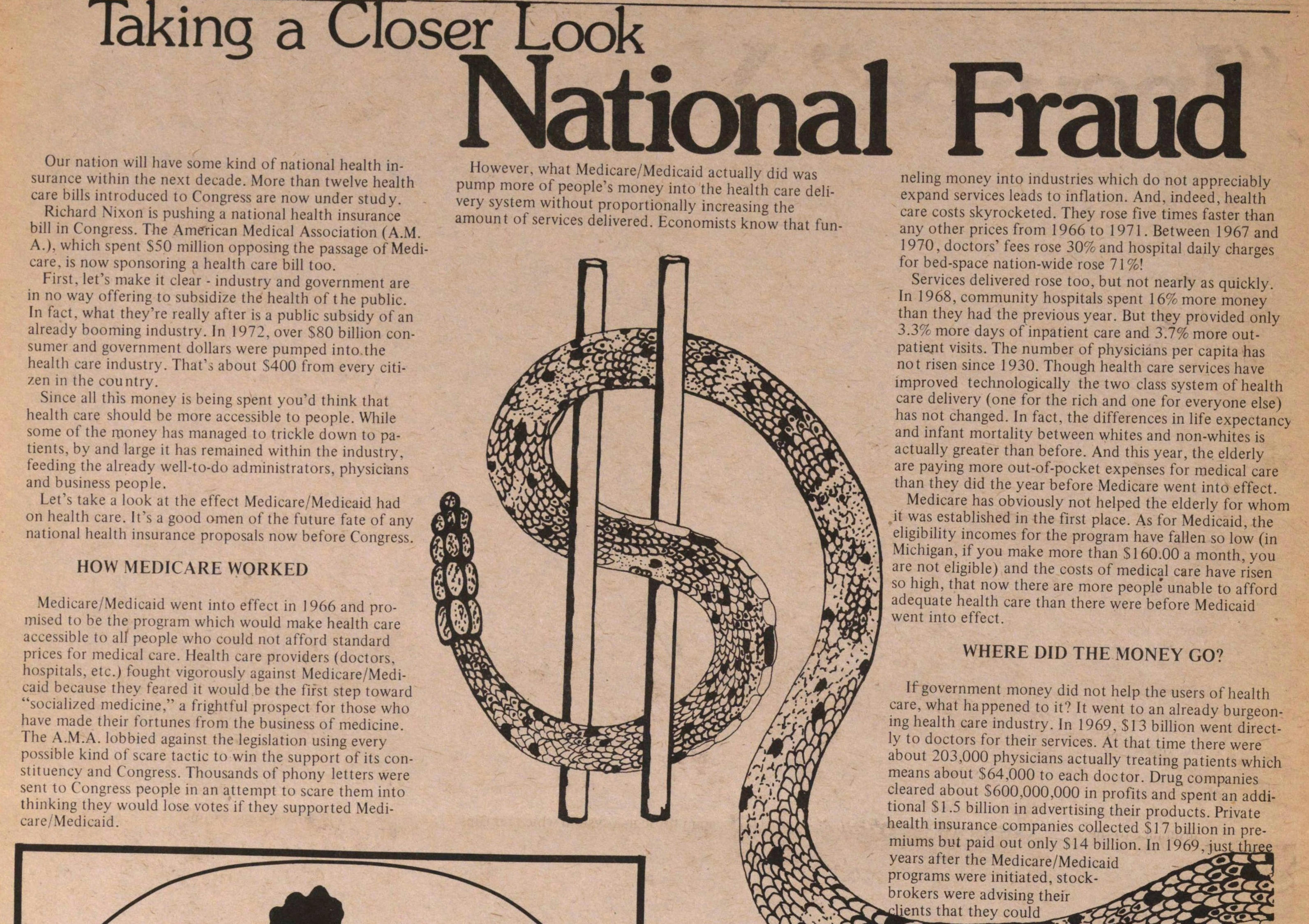 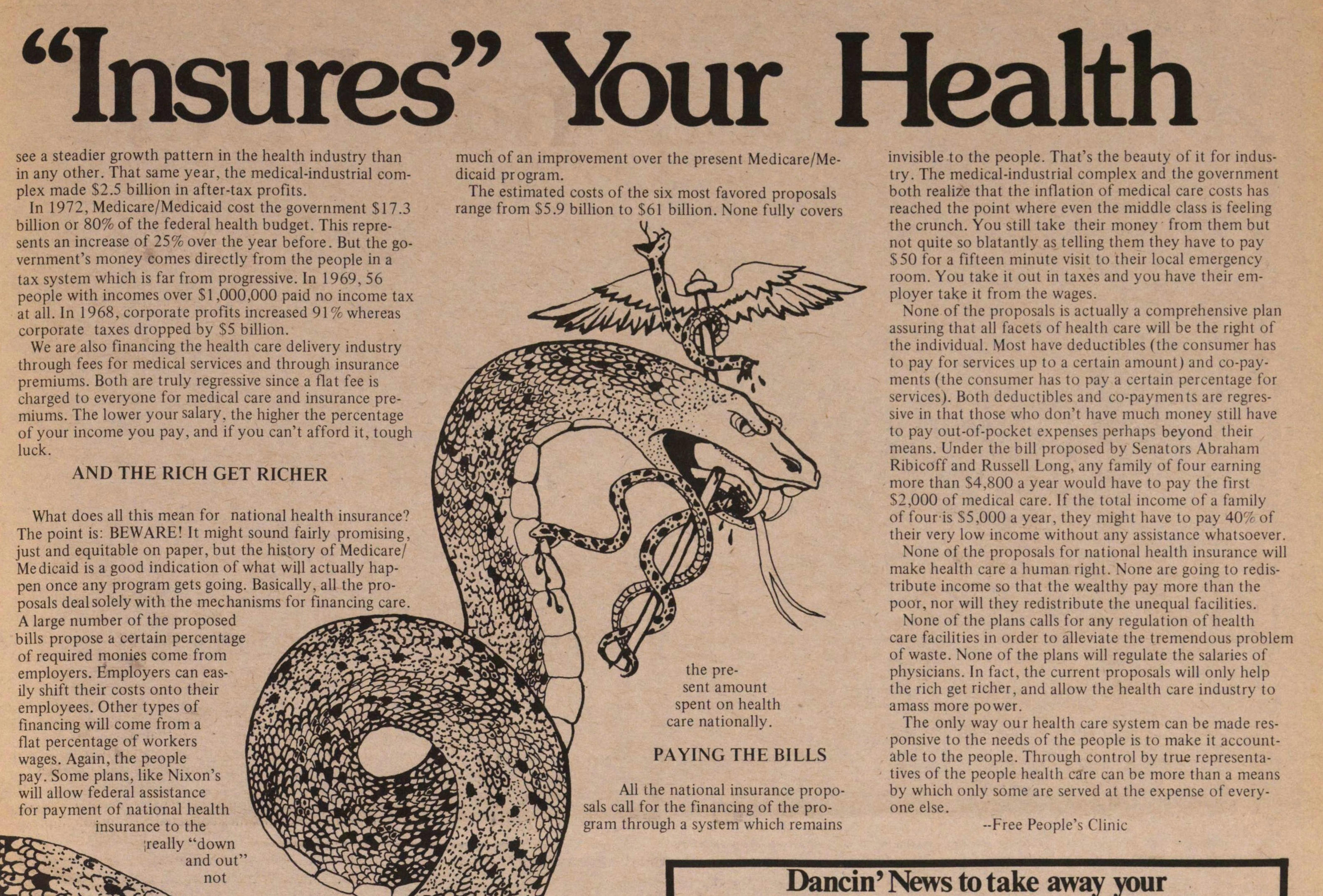 Our nation will have some kind of national health insurance within the next decade. More than twelve health care bills introduced to Congress are now under study.

Richard Nixon is pushing a national health insurance bill in Congress. The American Medical Association (A.M. A.), which spent $50 million opposing the passage of Medicare, is now sponsoring a health care billl too.

First, let's make it clear - industry and government are in no way offering to subsidize the health of the public. In fact, what they're really after is a public subsidy of an already booming industry. In 1972, over $80 billion consumer and government dollars were pumped into the health care industry. That's about $400 from every citizen in the country.

Since all this money is being spent you'd think that health care should be more accessible to people. While some of the money has managed to trickle down to patients, by and large it has remained within the industry, feeding the already well-to-do administrators, physicians and business people.

Let's take a look at the effect Medicare/Medicaid had on health care. It's a good omen of the future fate of any national health insurance proposals now before Congress.

Medicare/Medicaid went into effect in 1966 and promised to be the program which would make health care accessible to all people who could not afford standard prices for medical care. Health care providers (doctors, hospitals. etc.) fought vigorously against Medicare/Medicaid because they feared it would be the first step toward "socialized medicine," a frightful prospect for those who have made their fortunes from the business of medicine. The A.M.A. lobbied against the legislation using every possible kind of scare tactic to win the support of its constituency and Congress. Thousands of phony letters were sent to Congress people in an attempt to scare them into thinking they would lose votes if they supported Medicare/Medicaid.

However. what Medicare/Medicaid actually did was pump more of people's money into the health care delivery system without proportionally increasing the amount of services delivered. Economists know that funneling money into industries which do not appreciably expand services leads to inflation. And. indeed, health care costs skyrocketed. They rose five times faster than any other prices from 1966 to 1971. Between 1967 and 1970, doctors' fees rose 30% and hospital daily charges for bed-space nation-wide rose 71%!

Services delivered rose too. but not nearly as quickly. In 1968, community hospitals spent 16% more money than they had the previous year. But they provided only 3.3% more days of inpatient care and 3.7% more outpatient visits. The number of physicians per capita has not risen since 1930. Though health care services have improved technologically the two class system of health care delivery (one for the rich and one for everyone else) has not changed. In fact, the differences in life expectancy and infant mortality between whites and non-whites is actually greater than before. And this year, the elderly are paying more out-of-pocket expenses for medical care than they did the year before Medicare went into effect.

Medicare has obviously not helped the elderly for whom it was established in the first place. As for Medicaid, the eligibility incomes for the program have fallen so low (in Michigan, if you make more than $160.00 a month, you are not eligible) and the costs of medical care have risen so high, that now there are more people unable to afford adequate health care than there were before Medicaid went into effect.

WHERE DID THE MONEY GO?

If government money did not help the users of health care, what happened to it? It went to an already burgeoning health care industry. In 1969, $13 billion went directly to doctors for their services. At that time there were about 203,000 physicians actually treating patients which means about $64,000 to each doctor. Drug companies cleared about $600,000,000 in profits and spent an additional $1.5 billion in advertising their products. Private health insurance companies collected $17 billion in premiums but paid out only $14 billion. In 1969, just three years after the Medicare/Medicaid programs were initiated, brokers were advising their clients that they could see a steadier growth pattern in the health industry than in any other. That same year, the medical-industrial complex made $2.5 billion in after-tax profits.

In 1972, Medicare/Medicaid cost the government $17.3 billion or 80% of the federal health budget. This represents an increase of 25% over the year before. But the government's money comes directly from the people in a tax system which is far from progressive. In 1969, 56 people with incomes over $1,000,000 paid no income tax at all. In 1968, corporate profits increased 91% whereas corporate taxes dropped by $5 billion.

We are also financing the health care delivery industry through fees for medical services and through insurance premiums. Both are truly regressive since a flat fee is charged to everyone for medical care and insurance premiums. The lower your salary. the higher the percentage of your income you pay, and if you can't afford it, tough luck.

AND THE RICH GET RICHER

What does all this mean for national health insurance? The point is: BEWARE! It might sound fairly promising, just and equitable on paper, but the history of Medicare/Medicaid is a good indication of what will actually happen once any program gets going. Basically, all the proposals deal solely with the mechanisms for financing care. A large number of the proposed bills propose a certain percentage of required monies come from employers. Employers can easily shift their costs onto their employees. Other types of financing will come from a flat percentage of workers wages. Again, the people pay. Some plans, like Nixon's will allow federal assistance for payment of national health insurance to the really "down and out" not much of an improvement over the present Medicare/Medicaid program.

The estimated costs of the six most favored proposals range from $5.9 billion to $61 billion. None fully covers the present amount spent on health care nationally.

All the national insurance proposals call for the financing of the program through a system which remains invisible to the people. That's the beauty of it for industry. The medical-industrial complex and the government both realize that the inflation of medical care costs has reached the point where even the middle class is feeling the crunch. You still take their money from them but not quite so blatantly as telling them they have to pay $50 for a fifteen minute visit to their local emergency room. You take it out in taxes and you have their employer take it from the wages.

None of the proposals is actually a comprehensive plan assuring that all facets of health care will be the right of the individual. Most have deductibles (the consumer has to pay for services up to a certain amount) and co-payments (the consumer has to pay a certain percentage for services). Both deductibles and co-payments are regressive in that those who don't have much money still have to pay out-of-pocket expenses perhaps beyond their means. Under the bill proposed by Senators Abraham Ribicoff and Russell Long, any family of four earning more than $4,800 a year would have to pay the first $2,000 of medical care. If the total income of a family of four is $5,000 a year, they might have to pay 40% of their very low income without any assistance whatsoever.

None of the proposals for national health insurance will make health care a human right. None are going to redistribute income so that the wealthy pay more than the poor, nor will they redistribute the unequal facilities.

None of the plans calls for any regulation of health care facilities in order to alleviate the tremendous problem of waste. None of the plans will regulate the salaries of physicians. In fact, the current proposals will only help the rich get richer, and allow the health care industry to amass more power.

The only way our health care system can be made responsive to the needs of the people is to make it accountable to the people. Through control by true representatives of the people health care can be more than a means by which only some are served at the expense of everyone else.