Bring Your Stash To The Hash Bash 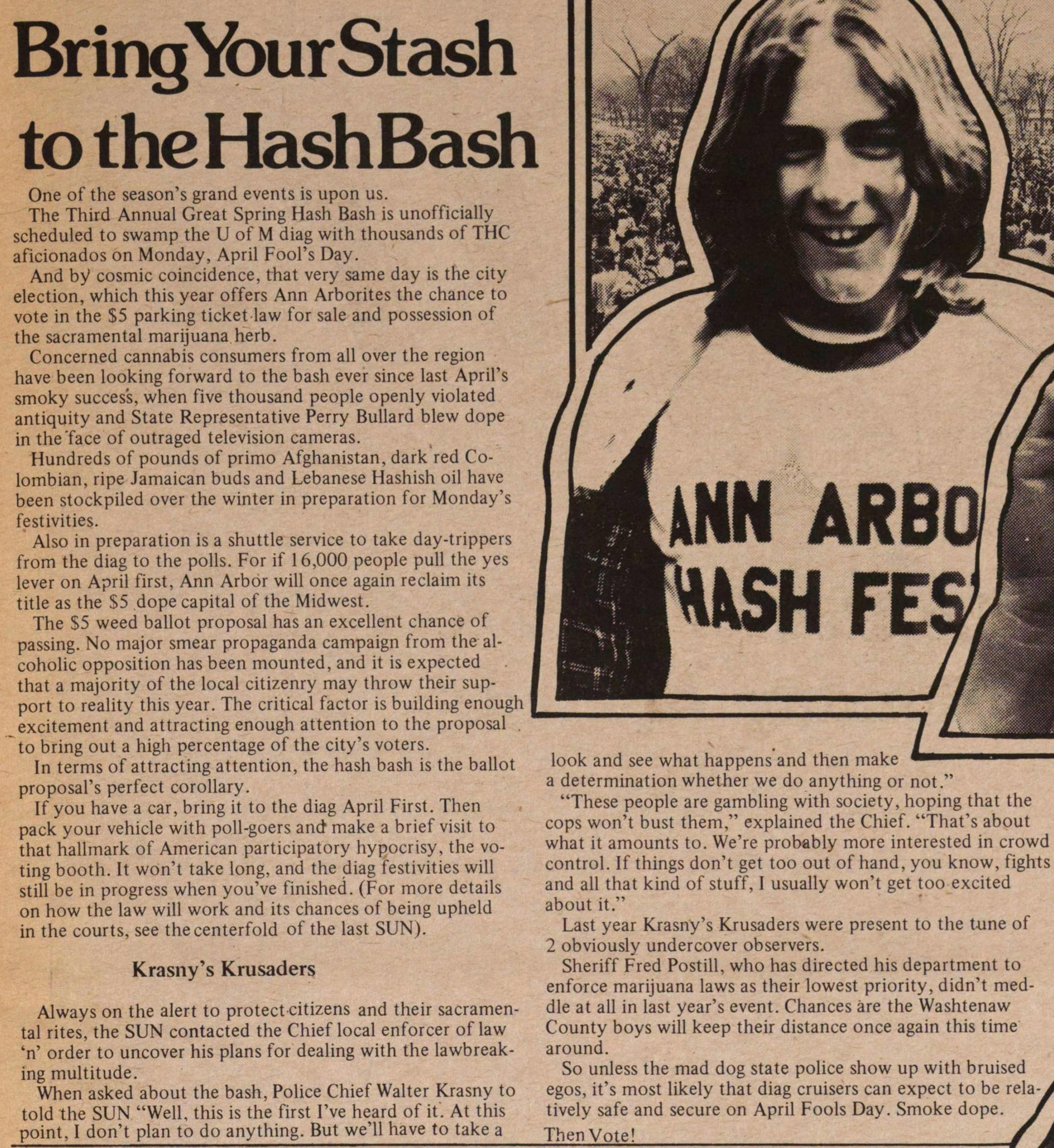 Bring Your Stash to the Hash Bash

One of the season's grand events is upon us.

The Third Annual Great Spring Hash Bash is unofficially scheduled to swamp the U of M diag with thousands of THC aficionados on Monday, April Fool's Day.

And by cosmic coincidence, that very same day is the city election, which this year offers Ann Arborites the chance to vote in the $5 parking ticket law for sale and possession of the sacramental marijuana herb.

Concerned cannabis consumers from all over the region have been looking forward to the bash ever since last April's smoky success, when five thousand people openly violated antiquity and State Representative Perry Bullard blew dope in the face of outraged television cameras.

Hundreds of pounds of primo Afghanistan, dark red Colombian, ripe Jamaican buds and Lebanese Hashish oil have been stockpiled over the winter in preparation for Monday's festivities.

Also in preparation is a shuttle service to take day-trippers from the diag to the polls. For if 16,000 people pull the yes lever on April first, Ann Arbor will once again reclaim its title as the $5 dope capital of the Midwest.

The $5 weed ballot proposal has an excellent chance of passing. No major smear propaganda campaign from the alcoholic opposition has been mounted, and it is expected that a majority of the local citizenry may throw their support to reality this year. The critical factor is building enough excitement and attracting enough attention to the proposal to bring out a high percentage of the city's voters.

In terms of attracting attention, the hash bash is the ballot proposal's perfect corollary.

If you have a car, bring it to the diag April First. Then pack your vehicle with poll-goers and make a brief visit to that hallmark of American participatory hypocrisy, the voting booth. It won't take long, and the diag festivities will still be in progress when you've finished. (For more details on how the law will work and its chances of being upheld in the courts, see the centerfold of the last SUN).

Always on the alert to protect citizens and their sacramental rites, the SUN contacted the Chief local enforcer of law 'n' order to uncover his plans for dealing with the lawbreaking multitude.

When asked about the bash, Police Chief Walter Krasny told the SUN "Well, this is the first I've heard of it. At this point, I don't plan to do anything. But we'll have to take a look and see what happens and then make a determination whether we do anything or not."

"These people are gambling with society, hoping that the cops won't bust them," explained the Chief. "That's about what it amounts to. We're probably more interested in crowd control. If things don't get too out of hand, you know, fights and all that kind of stuff, I usually won't get too excited about it."

Last year Krasny's Krusaders were present to the tune of 2 obviously undercover observers.

Sheriff Fred Postill, who has directed his department to enforce marijuana laws as their lowest priority, didn't meddle at all in last year's event. Chances are the Washtenaw County boys will keep their distance once again this time around.

So unless the mad dog state police show up with bruised egos, it's most likely that diag cruisers can expect to be relatively safe and secure on April Fools Day. Smoke dope. Then Vote!