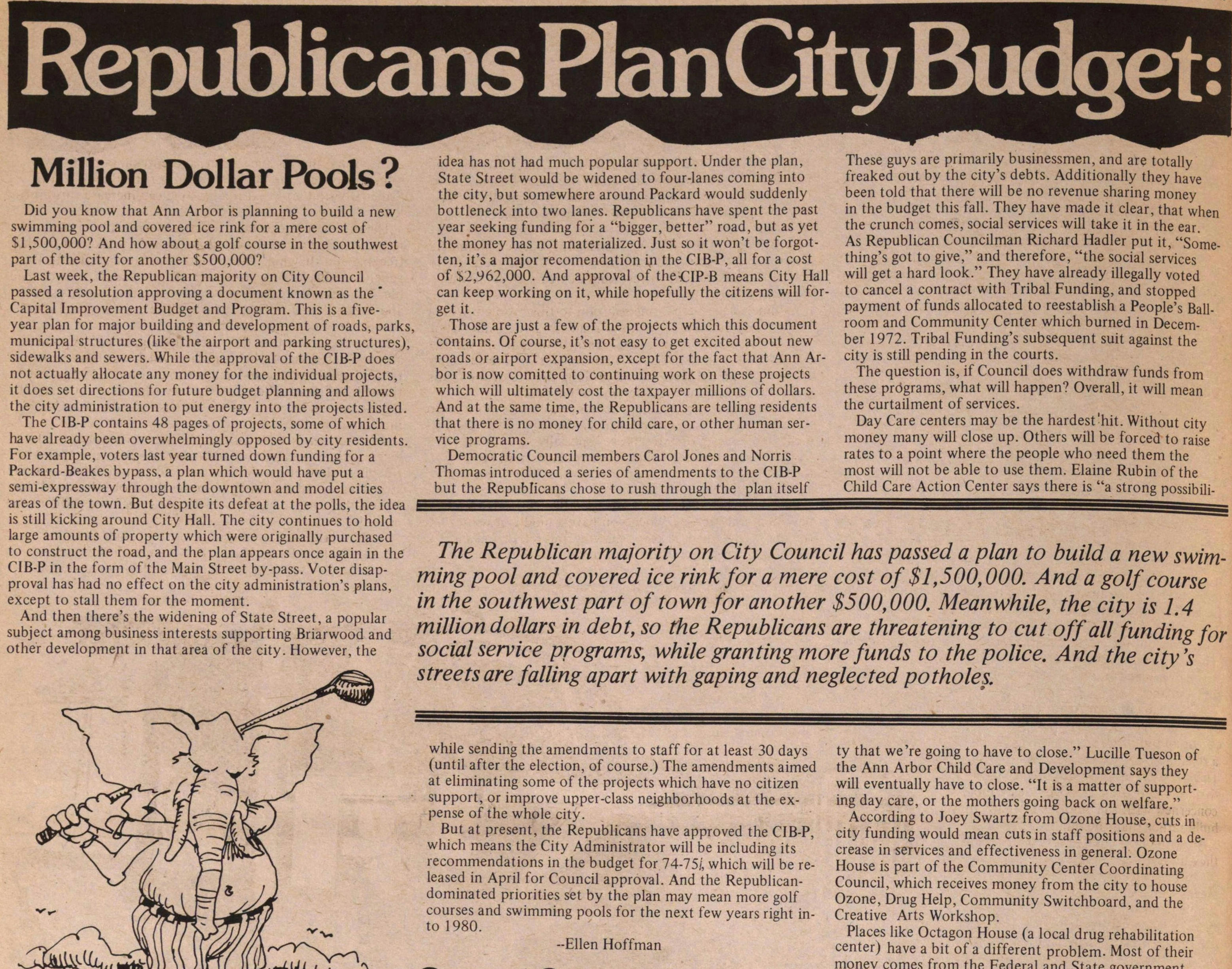 Did you know that Ann Arbor is planning to build a new swimming pool and covered ice rink for a mere cost of $1,500,000? And how about a golf course in the southwest part of the city for another $500,000?

Last week, the Republican majority on City Council passed a resolution approving a document known as the Capital Improvement Budget and Program. This is a five year plan for major building and development of roads, parks, municipal structures (like the airport and parking structures), sidewalks and sewers. While the approval of the CIB-P does not actually allocate any money for the individual projects, it does set directions for future budget planning and allows the city administration to put energy into the projects listed.

The CIB-P contains 48 pages of projects, some of which have already been overwhelmingly opposed by city residents. For example, voters last year turned down funding for a Packard-Beakes bypass, a plan which would have put a semi-expressway through the downtown and model cities areas of the town. But despite its defeat at the polls, the idea is still kicking around City Hall. The city continues to hold large amounts of property which were originally purchased to construct the road, and the plan appears once again in the CIB-P in the form of the Main Street by-pass. Voter disapproval has had no effect on the city administration's plans, except to stall them for the moment.

And then there's the widening of State Street, a popular subject among business interests supporting Briarwood and other development in that area of the city. However, the idea has not had much popular support. Under the plan, State Street would be widened to four-lanes coming into the city, but somewhere around Packard would suddenly bottleneck into two lanes. Republicans have spent the past year seeking funding for a "bigger, better" road, but as yet the money has not materialized. Just so it won't be forgotten, it's a major recommendation in the CIB-P, all for a cost of $2,962,000. And approval of the-CIP-B means City Hall can keep working on it, while hopefully the citizens will forget it.

Those are just a few of the projects which this document contains. Of course, it's not easy to get excited about new roads or airport expansion, except for the fact that Ann Arbor is now committed to continuing work on these projects which will ultimately cost the taxpayer millions of dollars. And at the same time, the Republicans are telling residents that there is no money for child care, or other human service programs.

Democratic Council members Carol Jones and Norris Thomas introduced a series of amendments to the CIB-P but the Republicans chose to rush through the plan itself while sending the amendments to staff for at least 30 days (until after the election, of course.) The amendments aimed at eliminating some of the projects which have no citizen support, or improve upper-class neighborhoods at the expense of the whole city.

But at present, the Republicans have approved the CIB-P, which means the City Administrator will be including its recommendations in the budget for 74-75, which will be released in April for Council approval. And the Republican dominated priorities set by the plan may mean more golf courses and swimming pools for the next few years right into 1980.

The Republican majority on City Council has passed a plan to build a new swimming pool and covered ice rink for a mere cost of $1,500, 000. And a golf course in the southwest part of town for another $500,000. Meanwhile, the city is 1.4 million dollars in debt, so the Republicans are threatening to cut off all funding for social service programs, while granting more funds to the police. And the city's streets are falling apart with gaping and neglected potholes.