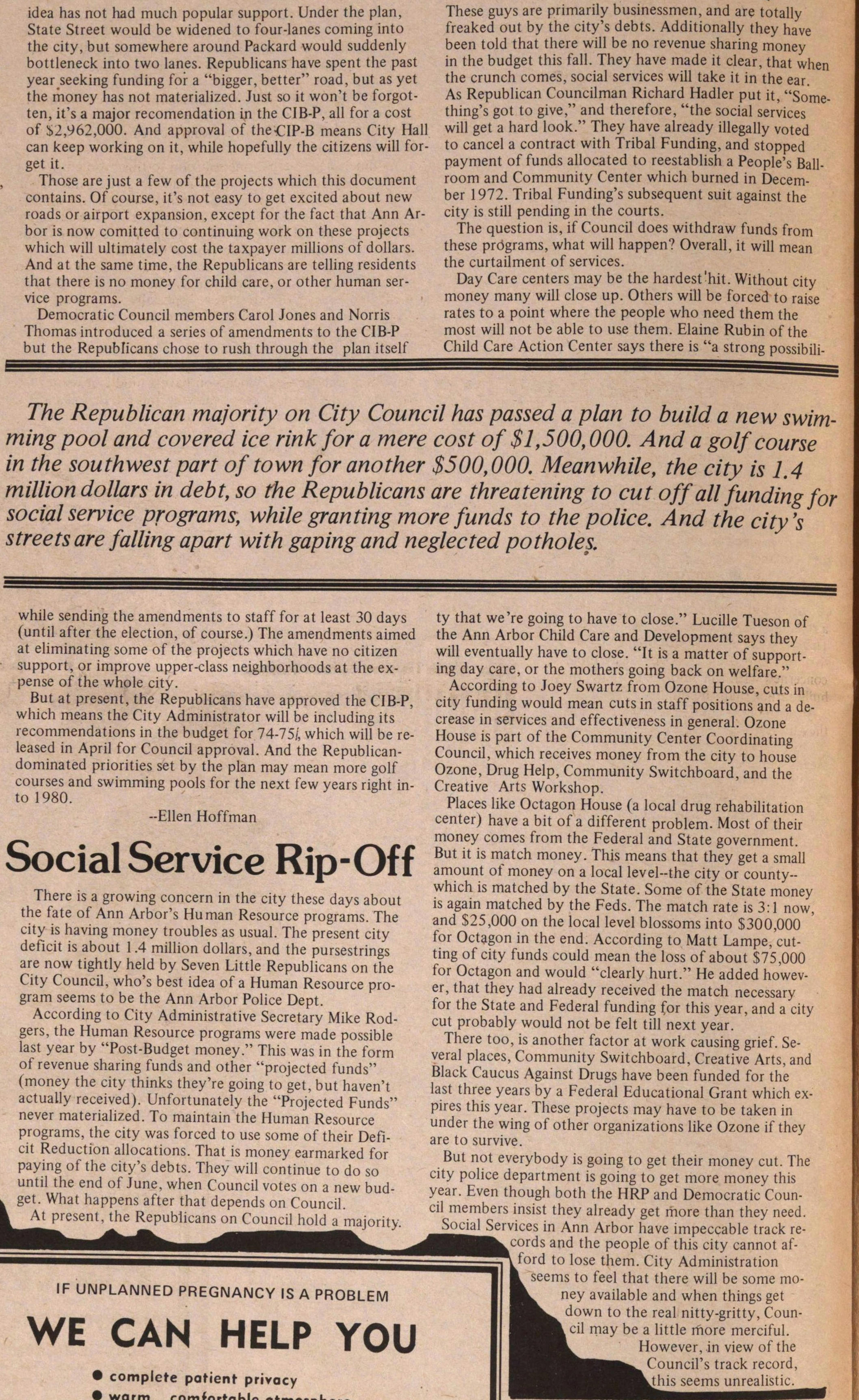 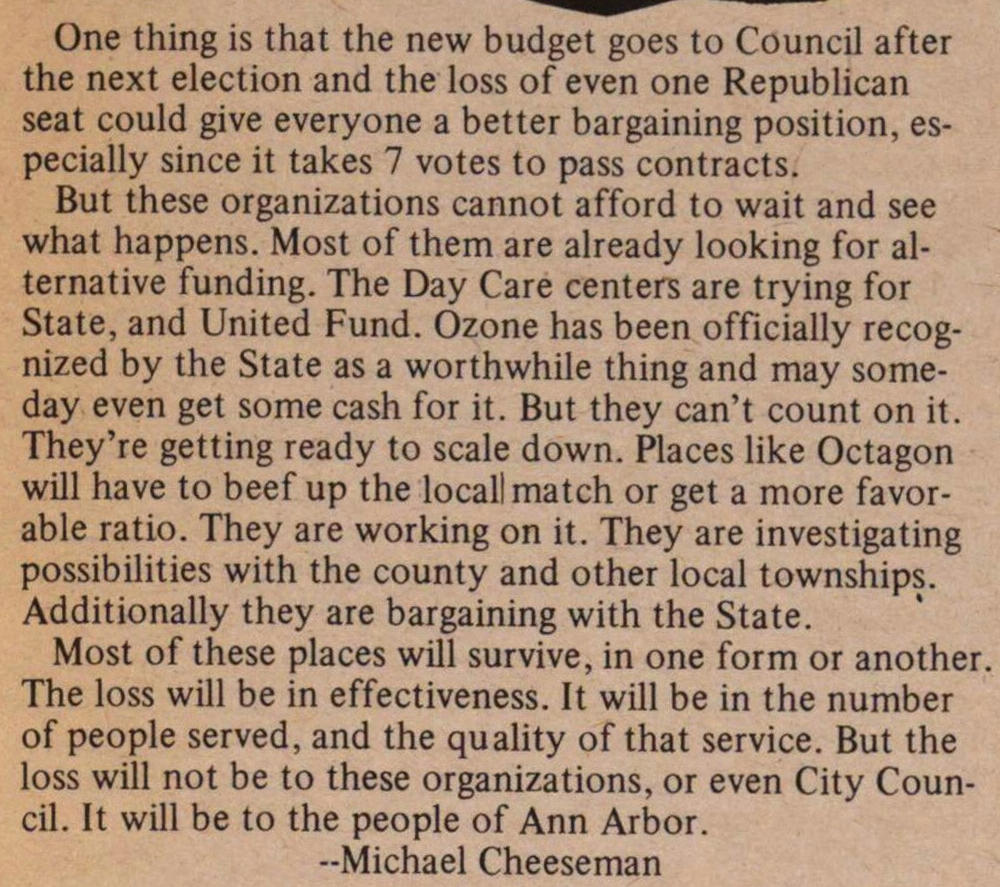 There is a growing concern in the city these days about the fate of Ann Arbor's Human Resource programs. The city is having money troubles as usual. The present city deficit is about 1.4 million dollars, and the purse strings are now tightly held by Seven Little Republicans on the City Council, who's best idea of a Human Resource program seems to be the Ann Arbor Police Dept.

According to City Administrative Secretary Mike Rodgers, the Human Resource programs were made possible last year by "Post-Budget money." This was in the form of revenue sharing funds and other "projected funds" (money the city thinks they're going to get, but haven't actually received). Unfortunately the "Projected Funds" never materialized. To maintain the Human Resource programs, the city was forced to use some of their Deficit Reduction allocations. That is money earmarked for paying off the city's debts. They will continue to do so until the end of June, when Council votes on a new budget. What happens after that depends on Council.

At present, the Republicans on Council hold a majority These guys are primarily businessmen, and are totally freaked out by the city's debts. Additionally they have been told that there will be no revenue sharing money in the budget this fall. They have made it clear, that when the crunch comes, social services will take it in the ear. As Republican Councilman Richard Hadler put it, "Something's got to give," and therefore, "the social services will get a hard look." They have already illegally voted to cancel a contract with Tribal Funding, and stopped payment of funds allocated to reestablish a People's Ballroom and Community Center which burned in December 1972. Tribal Funding's subsequent suit against the city is still pending in the courts.

The question is, if Council does withdraw funds from these programs, what will happen? Overall, it will mean the curtailment of services.

Day Care centers may be the hardest hit. Without city money many will close up. Others will be forced to raise rates to a point where the people who need them the most will not be able to use them. Elaine Rubin of the Child Care Action Center says there is "a strong possibility that we're going to have to close." Lucille Tueson of the Ann Arbor Child Care and Development says they will eventually have to close. "It is a matter of supporting day care, or the mothers going back on welfare."

According to Joey Swartz from Ozone House, cuts in city funding would mean cuts in staff positions and a decrease in services and effectiveness in general. Ozone House is part of the Community Center Coordinating Council, which receives money from the city to house Ozone, Drug Help, Community Switchboard, and the Creative Arts Workshop.

Places like Octagon House (a local drug rehabilitation center) have a bit of a different problem. Most of their money comes from the Federal and State government. But it is match money. This means that they get a small amount of money on a local level--the city or county--which is matched by the State. Some of the State money is again matched by the Feds. The match rate is 3:1 now, and $25,000 on the local level blossoms into $300,000 for Octagon in the end. According to Matt Lampe, cutting of city funds could mean the loss of about $75,000 for Octagon and would "clearly hurt." He added however, that they had already received the match necessary for the State and Federal funding for this year, and a city cut probably would not be felt till next year.

There too, is another factor at work causing grief. Several places, Community Switchboard, Creative Arts, and Black Caucus Against Drugs have been funded for the last three years by a Federal Educational Grant which expires this year. These projects may have to be taken in under the wing of other organizations like Ozone if they are to survive.

But not everybody is going to get their money cut. The city police department is going to get more money this year. Even though both the HRP and Democratic Council members insist they already get more than they need.

Social Services in Ann Arbor have impeccable track records and the people of this city cannot afford to lose them. City Administration seems to feel that there will be some money available and when things get down to the real nitty-gritty, Council may be a little more merciful. However, in view of the Council's track record, this seems unrealistic.

One thing is that the new budget goes to Council after the next election and the loss of even one Republican seat could give everyone a better bargaining position, especially since it takes 7 votes to pass contracts.

But these organizations cannot afford to wait and see what happens. Most of them are already looking for alternative funding. The Day Care centers are trying for State, and United Fund. Ozone has been officially recognized by the State as a worthwhile thing and may someday even get some cash for it. But they can't count on it. They're getting ready to scale down. Places like Octagon will have to beef up the local match or get a more favorable ratio. They are working on it. They are investigating possibilities with the county and other local townships. Additionally they are bargaining with the State.

Most of these places will survive, in one form or another. The loss will be in effectiveness. It will be in the number of people served, and the quality of that service. But the loss will not be to these organizations, or even City Council. It will be to the people of Ann Arbor.