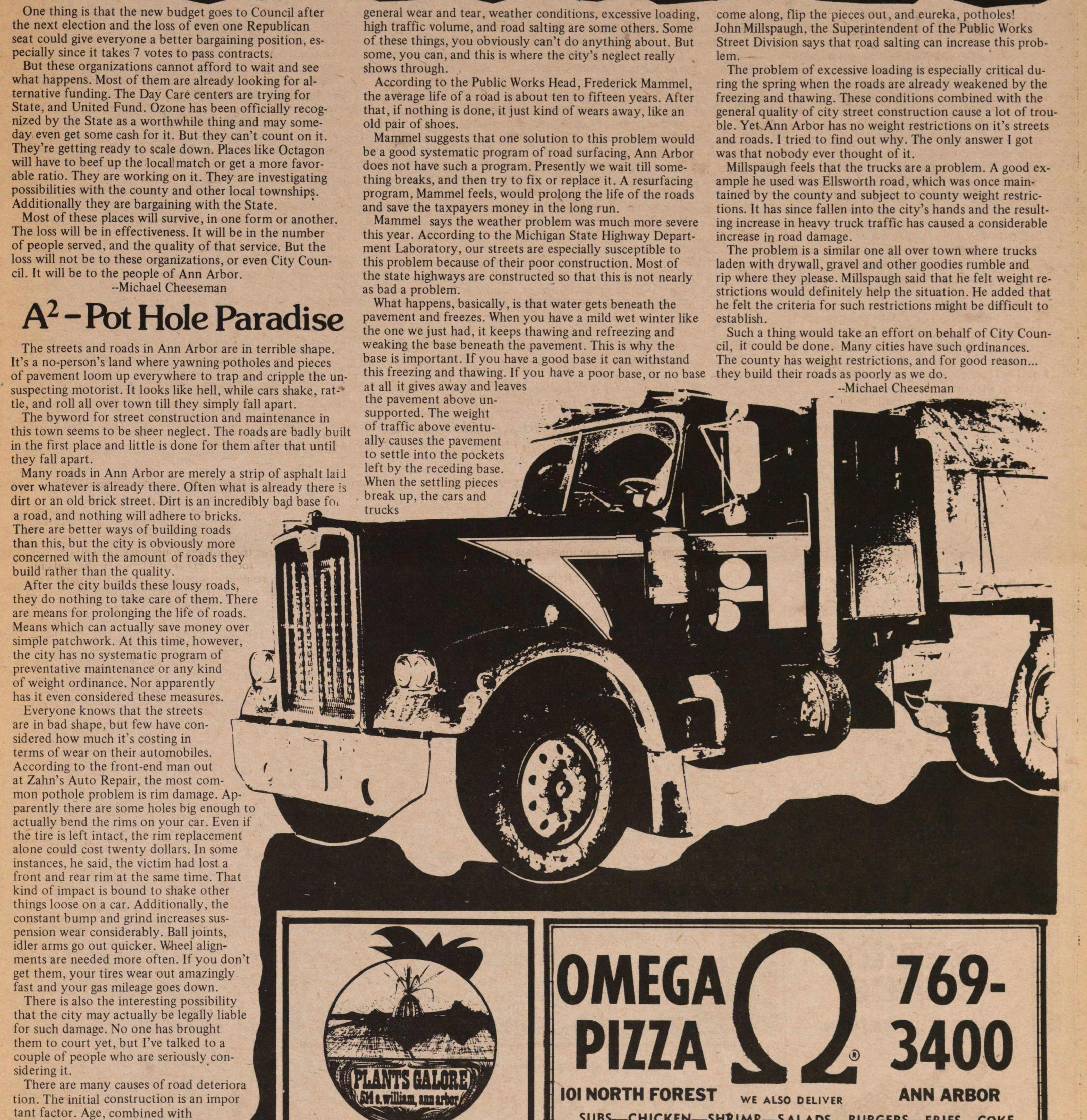 The streets and roads in Ann Arbor are in terrible shape. It's a no-person's land where yawning potholes and pieces of pavement loom up everywhere to trap and cripple the unsuspecting motorist. It looks like heil, while cars shake, rat- tle, and roll all over town till they simply fall apart. The byword for street construction and maintenance in this town seems to be sheer neglect. The roads are badly built in the first place and little is done for them after that until they fall apart. Many roads in Ann Arbor are merely a strip of asphalt lai J over whatever is already there. Often what is already there is dirt or an old brick street. Dirt is an incredibly bad base fri a road, and nothing will adhere to bricks. There are better ways of building roads than this, but the city is obviousïy more concerned with the amount of roads they build rather than the quality. After the city builds these lousy roads, they do nothing to take care of them. There are means for prolonging the life of roads. Means which can actually save money over simple patchwork. At this time, however, the city has no systematic program oí preventative maintenance or any kind of weight ordinance. Nor apparently has it even considered these measures. Everyone knows that the streets are in bad shape, but few have ' sidered how much it's costing in terms of wear on their automobiles. 1 According to the front-end man out at Zahn's Auto Repair, the most mon pothole problem is rim damage. Apparently there are some holes big enough to actually bend the rims on your car. Even if the tire is left intact, the rim replacement alone could cost twenty dollars. In some instances, he said, the victim had lost a iront ana rear rim at tne same urne. inat kind of impact is bound to shake other I things loose on a car. Additionally, the constant bump and grind increases suspension wear considerably. Ball joints, idler arms go out quicker. Wheel alignments are needed more often. If you don't get them, your tires wear out amazingly fast and your gas mileage goes down. There is also the interesting possibility that the city may actually be legally liable for such damage. No one has brought them to court yet, but Tve talked to a j couple of people who are seriously I sidering it. 1 There are many causes of road deteriora ' tion. The initial construction is an impor tant factor. Age, combined with Á general wear and tear, weather conditions, excessive loading, high traffic volume, and road salting are some others. Some of these things, you obviously can't do anything about. But some, you can, and this is where the city's neglect really shows through. According to the Public Works Head, Frederick Mammei, the average life of a road is about ten to fifteen years. After that, if nothing is done, it just kind of wears away, like an old pair of shoes. Mammel suggests that one solution to this problem would be a good systematic program of road surfacing, Ann Arbor does not have such a program. Presently we wait till something breaks, and then try to fix or replace it. A resurfacing program, Mammel feels, would prolong the life of the roads and save the taxpayers money in the long run. Mammel says the weather problem was much more severe this year. According to the Michigan State Highway Department Laboratory, our streets are especially susceptible to this problem because of their poor construction. Most of the state highways are constructed so that this is not nearly as bad a problem. What happens, basically, is that water gets beneath the pavement and freezes. When you have a mild wet winter like the one we just had, it keeps thawing and refreezing and weaking the base beneath the pavement. This is why the base is important. If you have a good base it can withstand this freezing and thawing. If you have a poor base, or no base at all ït gives away and leaves the pavement above unsupported. The weight of traffic above eventually causes the pavement to settle into the pockets left by the receding base. " i When the settling pieces i break up, the cars and ijk trucks ÍC come along, flip the pieces out, and eureka, potholes! John Millspaugh, the Superintendent of the Public Works Street División says that road salting can increase this problem. The problem of excessive loading is especially critical during the spring when the roads are already weakened by the freezing and thawing. These conditions combined with the general quality of city street construction cause a lot of trouble. Yet Ann Arbor has no weight restrictions on it's streets and roads. I tried to find out why. The only answer I got was that nobody ever thought of it. Millspaugh feels that the trucks are a problem. A good example he used was Ellsworth road, which was once maintained by the county and subject to county weight restrictions. It has since fallen into the city's hands and the resulting increase in heavy truck traffic has caused a considerable increase in road damage. The problem is a similar one all over town where trucks laden with drywall, gravel and other goodies rumble and rip where they please. Millspaugh said that he feit weight restrictions would definitely help the situation. He added that he feit the criteria for such restrictions might be difficult to establish. Such a thing would take an effort on behalf of City Council, it could be done. Many cities have such ordinances. The county has weight restrictions, and for good reason... they build their roads as poorly as we do.