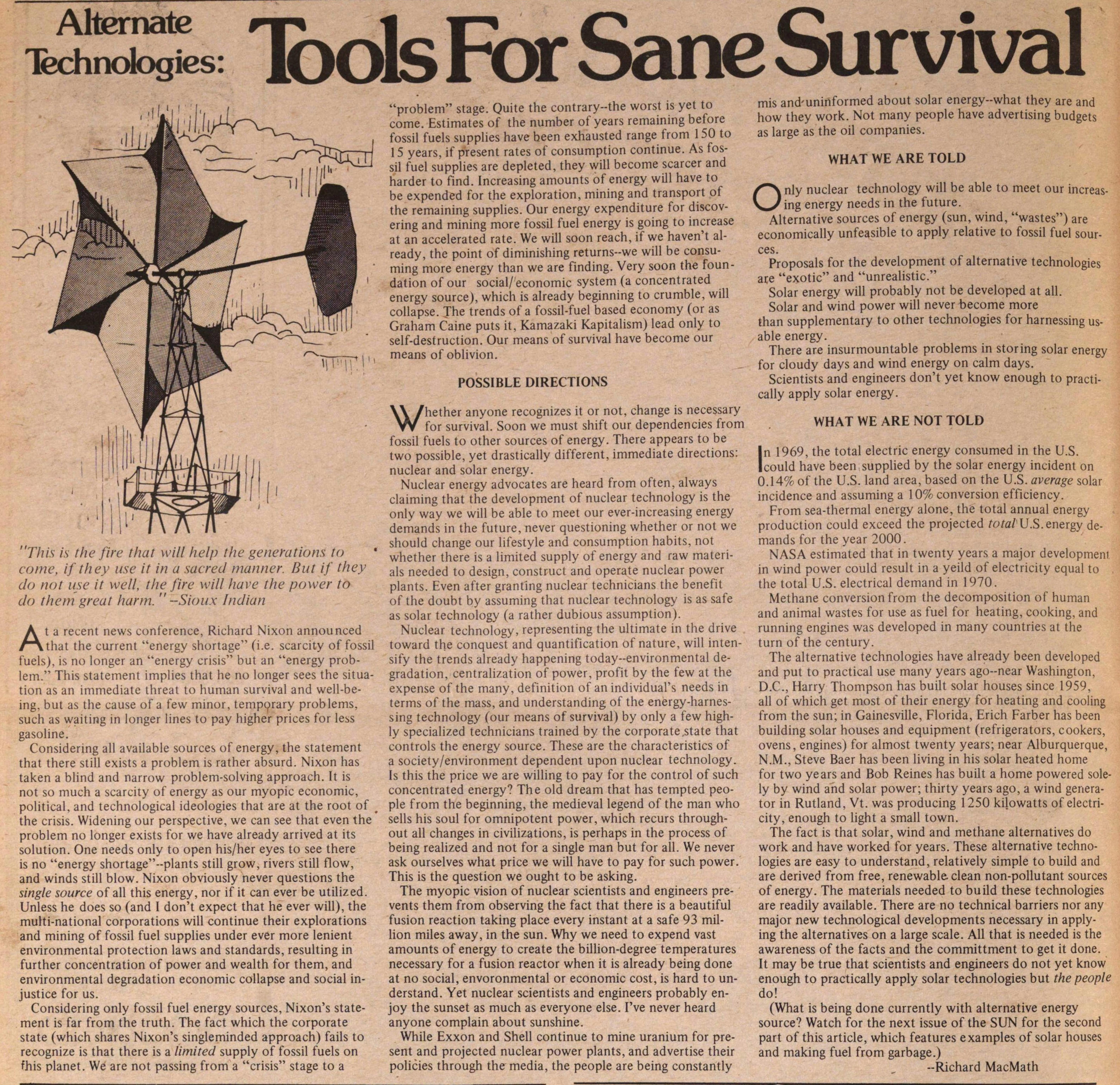 "This is the fire that will help the generations to come, if they use it in a sacred manner. But if they do not use it well, the fire will have the power to do them great harm." -- Sioux Indian

At a recent news conference, Richard Nixon announced that the current "energy shortage" (i.e. scarcity of fossil fuels), is no longer an "energy crisis" but an "energy problem." This statement implies that he no longer sees the situation as an immediate threat to human survival and well-being, but as the cause of a few minor, temporary problems, such as waiting in longer lines to pay higher prices for less gasoline.

Considering all available sources of energy, the statement that there still exists a problem is rather absurd. Nixon has taken a blind and narrow problem-solving approach. It is not so much a scarcity of energy as our myopic economic, political, and technological ideologies that are at the root of the crisis. Widening our perspective, we can see that even the problem no longer exists for we have already arrived at its solution. One needs only to open his/her eyes to see there is no "energy shortage" -- plants still grow, rivers still flow, and winds still blow. Nixon obviously never questions the single source of all this energy, nor if it can ever be utilized. Unless he does so (and I don't expect that he ever will), the multi-national corporations will continue their explorations and mining of fossil fuel supplies under ever more lenient environmental protection laws and standards, resulting in further concentration of power and wealth for them, and environmental degradation economic collapse and social injustice for us.

Considering only fossil fuel energy sources, Nixon's statement is far from the truth. The fact which the corporate state (which shares Nixon's single-minded approach) fails to recognize is that there is a limited supply of fossil fuels on this planet. We are not passing from a "crisis" stage to a "problem" stage. Quite the contrary -- the worst is yet to come. Estimates of the number of years remaining before fossil fuels supplies have been exhausted range from 150 to 15 years, if present rates of consumption continue. As fossil fuel supplies are depleted, they will become scarcer and harder to find. Increasing amounts of energy will have to be expended for the exploration, mining and transport of the remaining supplies. Our energy expenditure for discovering and mining more fossil fuel energy is going to increase at an accelerated rate. We will soon reach, if we haven't already, the point of diminishing returns -- we will be consuming more energy than we are finding. Very soon the foundation of our social economic system (a concentrated energy source), which is already beginning to crumble, will collapse. The trends of a fossil-fuel based economy (or as Graham Caine puts it, Kamazaki Kapitalism) lead only to self-destruction. Our means of survival have become our means of oblivion.

Whether anyone recognizes it or not, change is necessary for survival. Soon we must shift our dependencies from fossil fuels to other sources of energy. There appears to be two possible, yet drastically different, immediate directions: nuclear and solar energy.

Nuclear energy advocates are heard from often, always claiming that the development of nuclear technology is the only way we will be able to meet our ever-increasing energy demands in the future, never questioning whether or not we should change our lifestyle and consumption habits, not whether there is a limited supply of energy and raw materials needed to design, construct and operate nuclear power plants. Even after granting nuclear technicians the benefit of the doubt by assuming that nuclear technology is as safe as solar technology (a rather dubious assumption).

Nuclear technology, representing the ultimate in the drive toward the conquest and quantification of nature, will intensify the trends already happening today -- environmental degradation, centralization of power, profit by the few at the expense of the many, definition of an individual's needs in terms of the mass, and understanding of the energy-harnessing technology (our means of survival) by only a few highly specialized technicians trained by the corporate state that controls the energy source. These are the characteristics of a society/environment dependent upon nuclear technology. Is this the price we are willing to pay for the control of such concentrated energy? The old dream that has tempted people from the beginning, the medieval legend of the man who sells his soul for omnipotent power, which recurs throughout all changes in civilizations, is perhaps in the process of being realized and not for a single man but for all. We never ask ourselves what price we will have to pay for such power. This is the question we ought to be asking.

The myopic vision of nuclear scientists and engineers prevents them from observing the fact that there is a beautiful fusion reaction taking place every instant at a safe 93 million miles away, in the sun. Why we need to expend vast amounts of energy to create the billion-degree temperatures necessary for a fusion reactor when it is already being done at no social, environmental or economic cost, is hard to understand. Yet nuclear scientists and engineers probably enjoy the sunset as much as everyone else. I've never heard anyone complain about sunshine.

While Exxon and Shell continue to mine uranium for present and projected nuclear power plants, and advertise their policies through the media, the people are being constantly mis and uninformed about solar energy -- what they are and how they work. Not many people have advertising budgets as large as the oil companies.

WHAT WE ARE TOLD

Only nuclear technology will be able to meet our increasing energy needs in the future.

Proposals for the development of alternative technologies are "exotic" and "unrealistic."

Solar energy will probably not be developed at all.

Solar and wind power will never become more than supplementary to other technologies for harnessing usable energy.

There are insurmountable problems in storing solar energy for cloudy days and wind energy on calm days.

WHAT WE ARE NOT TOLD

In 1969, the total electric energy consumed in the U.S. could have been supplied by the solar energy incident on 0.14% of the U.S. land area, based on the U.S. average solar incidence and assuming a 10% conversion efficiency.

From sea-thermal energy alone, the total annual energy production could exceed the projected total U.S. energy demands for the year 2000.

NASA estimated that in twenty years a major development in wind power could result in a yield of electricity equal to the total U.S. electrical demand in 1970.

Methane conversion from the decomposition of human and animal wastes for use as fuel for heating, cooking, and running engines was developed in many countries at the turn of the century.

The alternative technologies have already been developed and put to practical use many years ago -- near Washington. D.C., Harry Thompson has built solar houses since 1959, all of which get most of their energy for heating and cooling from the sun; in Gainesville, Florida, Erich Farber has been building solar houses and equipment (refrigerators, cookers, ovens, engines) for almost twenty years; near Albuquerque, N.M., Steve Baer has been living in his solar heated home for two years and Bob Reines has built a home powered solely by wind and solar power; thirty years ago, a wind generator in Rutland, Vt. was producing 1250 kilowatts of electricity, enough to light a small town.

The fact is that solar, wind and methane alternatives do work and have worked for years. These alternative technologies are easy to understand, relatively simple to build and are derived from free, renewable, clean non-pollutant sources of energy. The materials needed to build these technologies are readily available. There are no technical barriers nor any major new technological developments necessary in applying the alternatives on a large scale. All that is needed is the awareness of the facts and the commitment to get it done. It may be true that scientists and engineers do not yet know enough to practically apply solar technologies but the people do!

(What is being done currently with alternative energy source? Watch for the next issue of the SUN for the second part of this article, which features examples of solar houses and making fuel from garbage.)