Schedule For The Future Worlds Conference 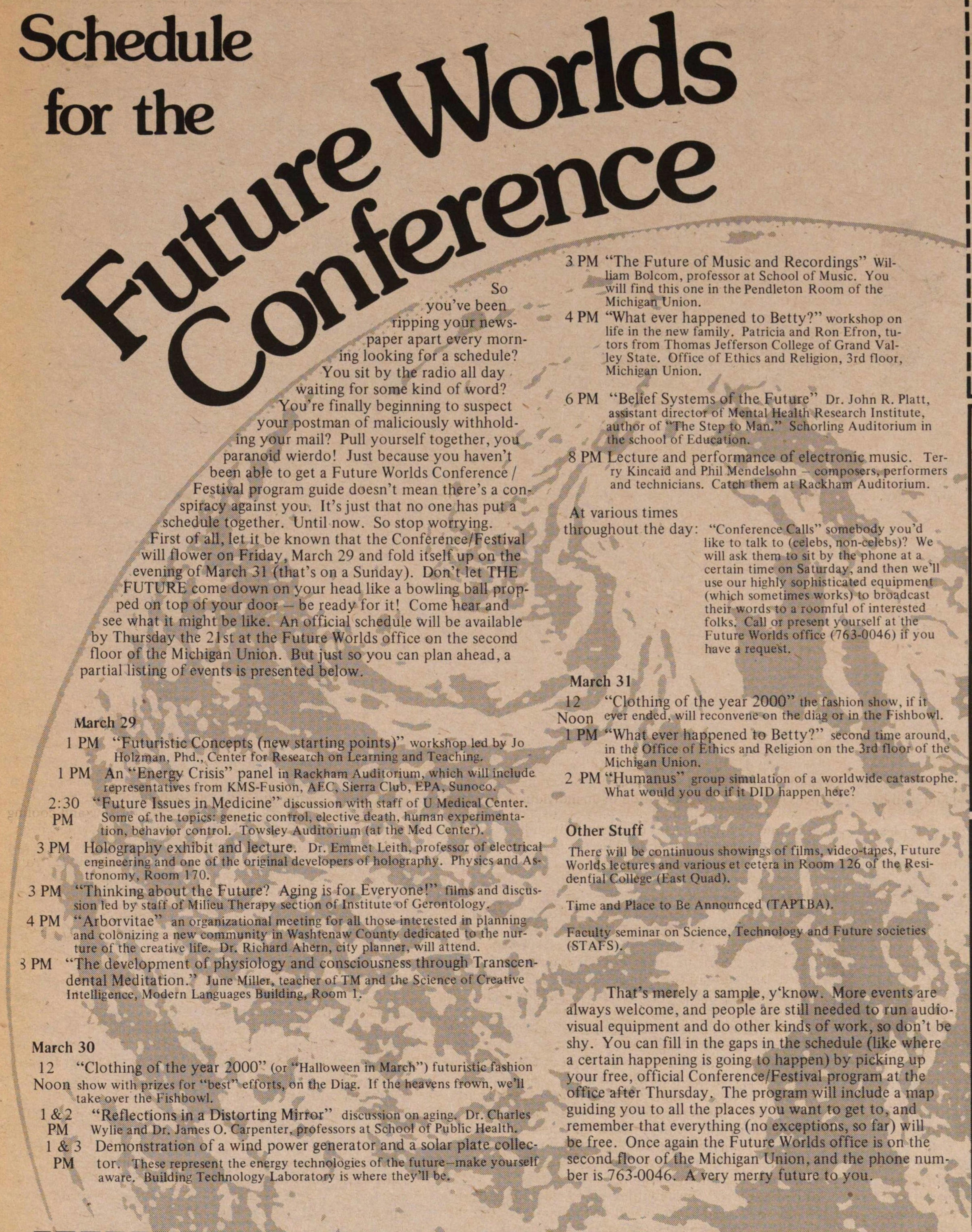 Schedule For The Future Worlds Conference

So you've been ripping your newspaper apart every morning looking for a schedule? You sit by the radio all day waiting for some kind of word? You're finally beginning to suspect your postman of maliciously withholding your mail? Pull yourself together, you paranoid wierdo! Just because you haven't been able to get a Future Worlds Conference Festival program guide doesn't mean there's a conspiracy against you. It's just that no one has put a schedule together. Until now. So stop worrying. First of all, let it be known that the Conference/Festival will flower on Friday, March 29 and fold itself up on the evening of March 31 (that's on a Sunday). Don't let THE FUTURE come down on your head like a bowling ball propped on top of your door -- be ready for it! Come hear and see what it might be like. An official schedule will be available by Thursday the 21st at the Future Worlds office on the second floor of the Michigan Union. But just so you can plan ahead, a partial listing of events is presented below.

1 PM An "Energy Crisis" panel in Rackham Auditorium, which will include representatives from KMS-Fusion, AEC, Sierra Club, FPA, Sunoco.

2:30 PM "Future Issues in Medicine" discussion with staff of U Medical Center. Some of the topics; genetic control, elective death, human experimentation, behavior control. Towsley Auditorium (at the Med Center).

3 PM Holography exhibit and lecture. Dr. Emmet Leith, professor of electrical engineering and one of the original developers of holography. Physics and Astronomy, Room 170.

3 PM "Thinking about the Future? Aging is for Everyone!" films and discussion led by staff of Milieu Therapy section of Institute of Gerontology.

4 PM "Arborvitae" an organizational meeting for all those interested in planning and colonizing a new community in Washtenaw County dedicated to the nurture of the creative life. Dr. Richard Ahern, city planner, will attend.

5 PM "The development of physiology and consciousness through Transcendental Meditation." June Miller, teacher at TM and the Science of Creative Intelligence, Modern Languages Building, Room 1.

12 Noon "Clothing of the year 2000" (or "Halloween in March") futuristic fashion show with prizes for "best" efforts, on the Diag. If the heavens frown, we'll take over the Fishbowl.

1 & 3 PM Demonstration of a wind power generator and a solar plate collector. These represent the energy technologies of the future -- make yourself aware. Building Technology Laboratory is where they'll be.

3 PM "The Future of Music and Recordings" William Bolcom,  professor at School of Music. You will find this one in the Pendleton Room of the Michigan Union.

4 PM "What ever happened to Betty?" workshop on life in the new family. Patricia and Ron Efron, tutors from Thomas Jefferson College of Grand Valley State. Office of Ethics and Religion, 3rd floor, Michigan Union.

6 PM "Belief Systems of the Future" Dr. John R. Platt, assistant director of Mental Health Research Institute, author of "The Step to Man." Schorling Auditorium in the school of Education.

At various times throughout the day:

"Conference Calls" somebody you'd like to talk to (celebs, non-celebs)? We will ask them to sit by the phone at a certain time on Saturday, and then we'll use our highly sophisticated equipment (which sometimes works) to broadcast their words to a room full of interested folks. Call or present yourself at the Future Worlds office (763-0046) if you have a request.

12 Noon "Clothing of the year 2000" the fashion show, if it ever ended, will reconvene on the diag or in the Fishbowl.

1 PM "What ever happened to Betty?" second time around, in the Office of Ethics and Religion on the 3rd floor of the Michigan Union.

2 PM "Humanus" group simulation of a worldwide catastrophe. What would you do if it DID happen here?

There will be continuous showings of films, video-tapes, Future Worlds lectures and various et cetera in Room 126 of the Residential College (East Quad).

Time and Place to Be Announced (TAPTBA).

That's merely a sample, y'know. More events are always welcome, and people are still needed to run audiovisual equipment and do other kinds of work, so don't be shy. You can fill in the gaps in the schedule (like where a certain happening is going to happen) by picking up your free, official Conference/Festival program at the office after Thursday. The program will include a map guiding you to all the places you want to get to, and remember that everything (no exceptions, so far) will be free. Once again the Future Worlds office is on the second floor of the Michigan Union, and the phone number is 763-0046. A very merry future to you.