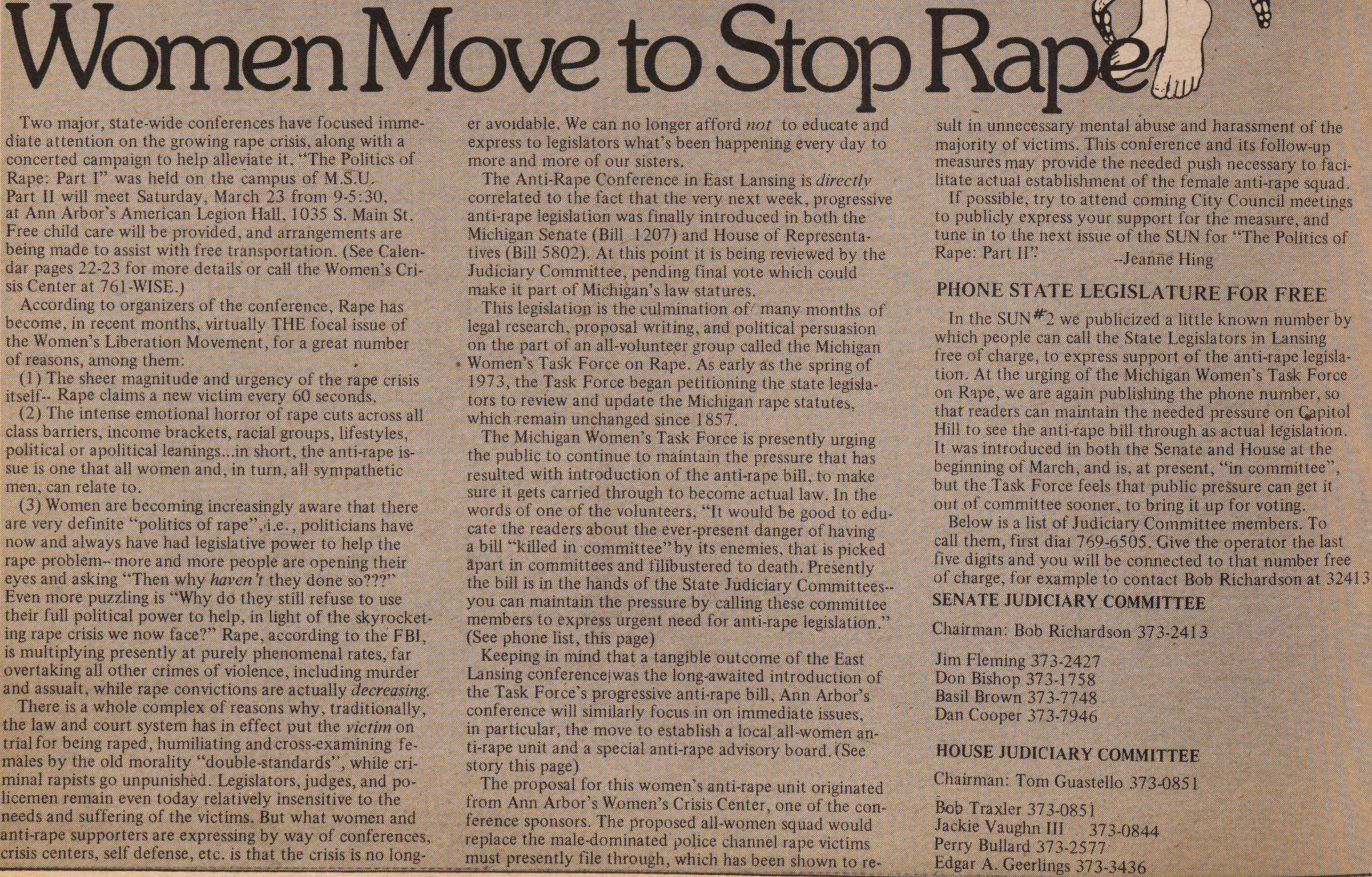 Two major, state-wide conferences have focused immediate attention on the growing rape crisis, along with a concerted campaign to help alleviate it. "The Politics of Rape: Part I" was held on the campus of M.S.U. Part II will meet Saturday, March 23 from 9-5:30, at Ann Arbor's American Legion Hall, 1035 S. Main St. Free child care will be provided, and arrangements are being made to assist with free transportation. (See Calendar pages 22-23 for more details or call the Women's Crisis Center at 761 -WISE.)

According to organizers of the conference, Rape has become, in recent months, virtually THE focal issue of the Women's Liberation Movement, for a great number of reasons, among them: .

(1) The sheer magnitude and urgency of the rape crisis itself -- Rape claims a new victim every 60 seconds.

(2) The intense emotional horror of rape cuts across all class barriers, income brackets, racial groups, lifestyles, political or apolitical leanings ... in short, the anti-rape issue is one that all women and, in turn, all sympathetic men, can relate to.

(3) Women are becoming increasingly aware that there are very definite "politics of rape", i.e. politicians have now and always have had legislative power to help the rape problem -- more and more people are opening their eyes and asking "Then why haven't they done so???" Even more puzzling is "Why do they still refuse to use their full political power to help, in light of the skyrocketing rape crisis we now face?" Rape, according to the FBI, is multiplying presently at purely phenomenal rates, far overtaking all other crimes of violence, including murder and assault, while rape convictions are actually decreasing.

There is a whole complex of reasons why, traditionally, the law and court system has in effect put the victim on trial for being raped, humiliating and cross-examining females by the old morality "double-standards", while criminal rapists go unpunished. Legislators, judges, and policemen remain even today relatively insensitive to the needs and suffering of the victims. But what women and anti-rape supporters are expressing by way of conferences, crisis centers, self defense, etc. is that the crisis is no longer avoidable. We can no longer not afford to educate and express to legislators what's been happening every day to more and more of our sisters.

The Anti-Rape Conference in East Lansing is directly correlated to the fact that the very next week, progressive anti-rape legislation was finally introduced in both the Michigan Senate (Bill 1207) and House of Representatives (Bill 5802). At this point it is being reviewed by the Judiciary Committee, pending final vote which could make it part of Michigan's law statures.

This legislation is the culmination of many months of legal research, proposal writing.and political persuasion on the part of an all-volunteer group called the Michigan Women's Task Force on Rape. As early as the spring of 1973, the Task Force began petitioning the state legislators to review and update the Michigan rape statutes, which remain unchanged since 1857.

The Michigan Women's Task Force is presently urging the public to continue to maintain the pressure that has resulted with introduction of the anti-rape bill, to make sure it gets carried through to become actual law. In the words of one of the volunteers, "It would be good to educate the readers about the ever-present danger of having a bill "killed in committee" by its enemies, that is picked apart in committees and filibustered to death. Presently the bill is in the hands of the State Judiciary Committees -- you can maintain the pressure by calling these committee members to express urgent need for anti-rape legislation." (See phone list, this page)

Keeping in mind that a tangible outcome of the East Lansing conference was the long-awaited introduction of the Task Force's progressive anti-rape bill, Ann Arbor's conference will similarly focus in on immediate issues, in particular, the move to establish a local all-women anti-rape unit and a special anti-rape advisory board. (See story this page)

The proposal for this women's anti-rape unit originated from Ann Arbor's Women's Crisis Center, one of the conference sponsors. The proposed all-women squad would replace the male-dominated police channel rape victims must presently file through, which has been shown to result in unnecessary mental abuse and harassment of the majority of victims. This conference and its follow-up measures may provide the needed push necessary to facilitate actual establishment of the female anti-rape squad.

If possible, try to attend coming City Council meetings to publicly express your support for the measure, and tune in to the next issue of the SUN for "The Politics of Rape: Part II."

In the SUN #2 we publicized a little known number by which people can call the State Legislators in Lansing free of charge, to express support of the anti-rape legislation. At the urging of the Michigan Women's Task Force on Rape, we are again publishing the phone number, so that readers can maintain the needed pressure on Capitol Hill to see the anti-rape bill through as actual legislation. It was introduced in both the Senate and House at the beginning of March, and is, at present, "in committee", but the Task Force feels that public pressure can get it out of committee sooner, to bring it up for voting. Below is a list of Judiciary Committee members. To call them, first dial 769-6505. Give the operator the last five digits and you will be connected to that number free of charge, for example to contact Bob Richardson at 32413