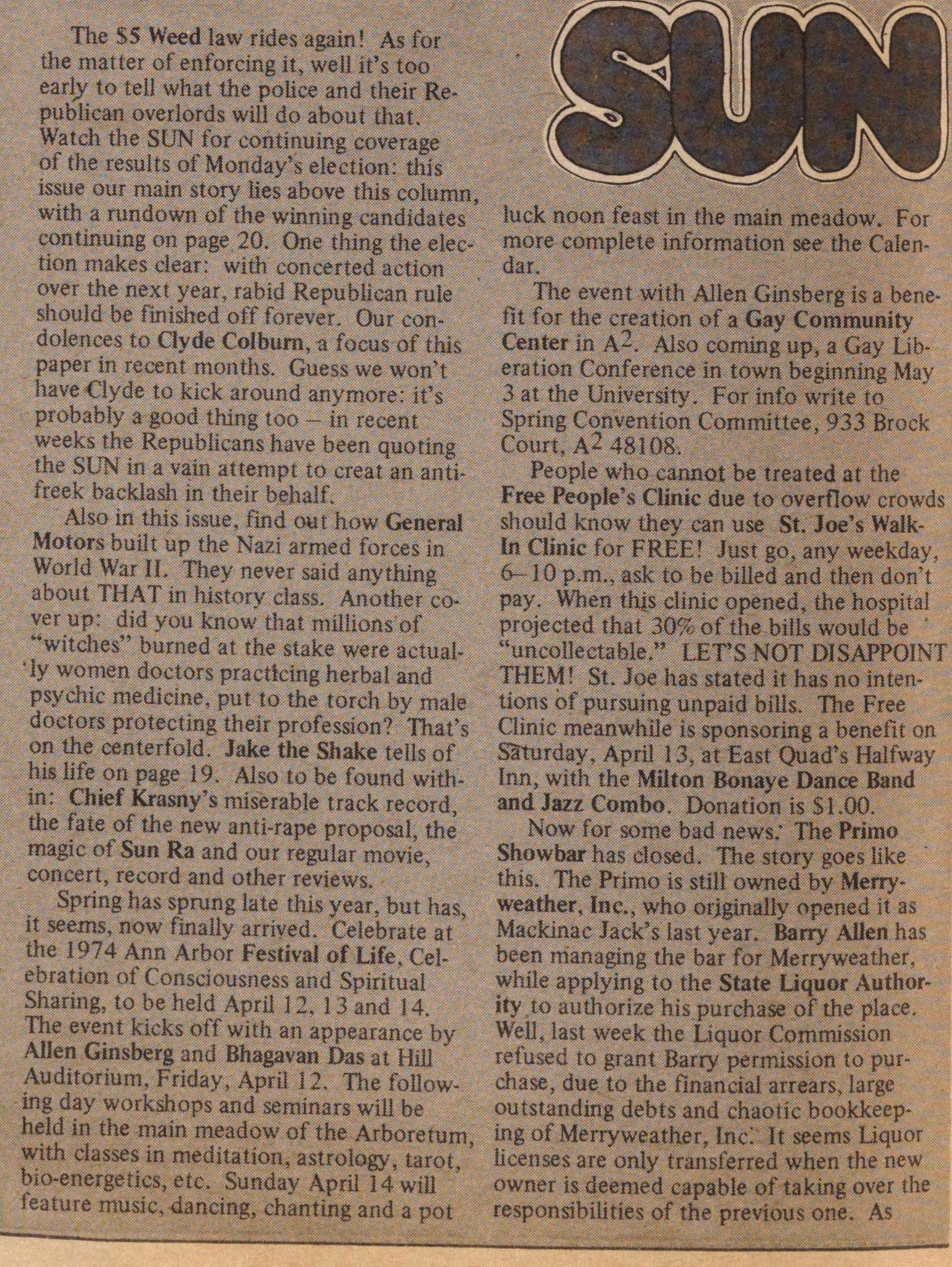 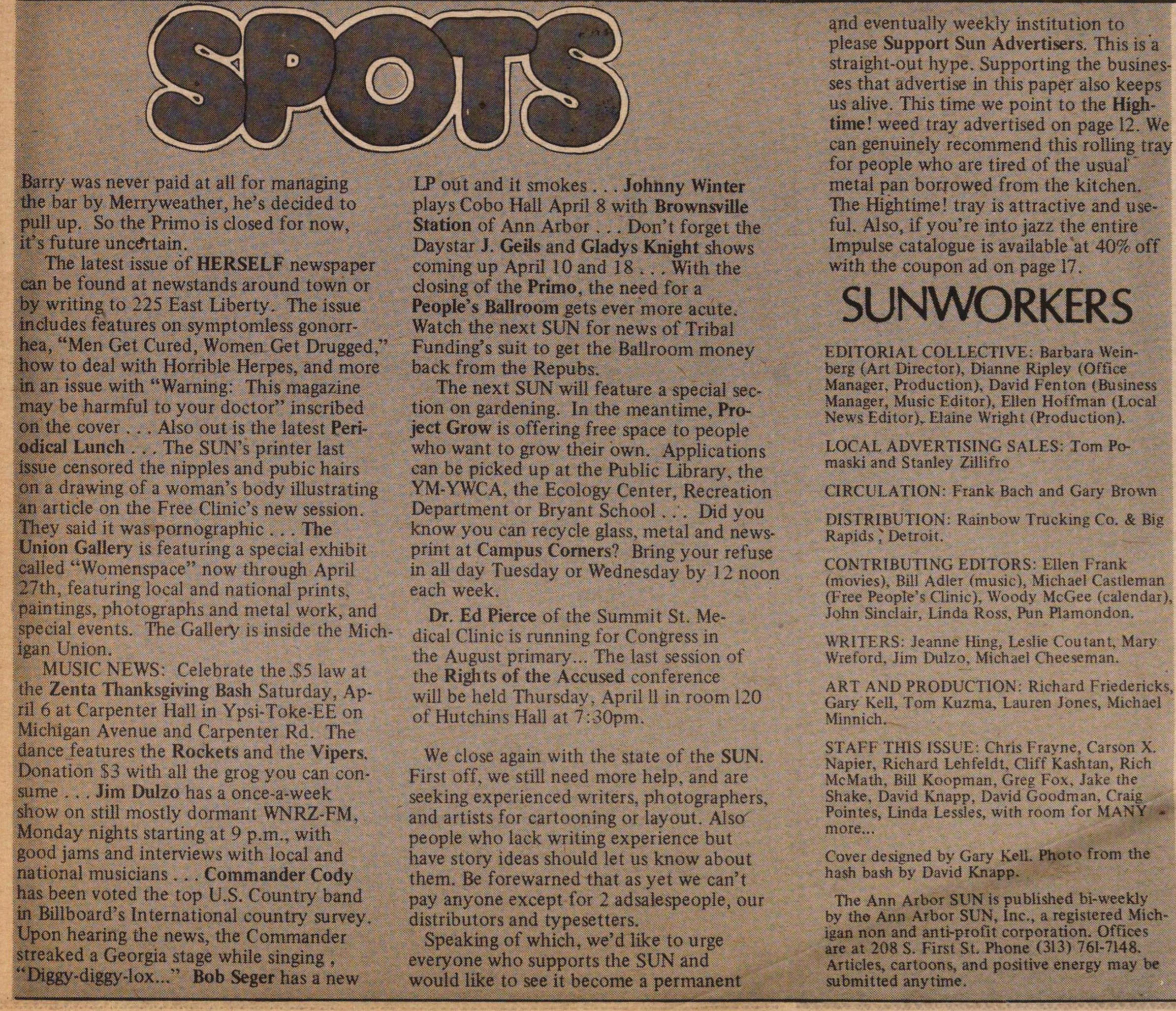 The $5 Weed law rides again! As for the matter of enforcing it, well it's too early to tell what the police and their Republican overlords will do about that. Watch the SUN for continuing coverage of the results of Monday's election: this issue our main story lies above this column, with a rundown of the winning candidates continuing on page 20. One thing the election makes clear: with concerted action over the next year, rabid Republican rule should be finished off forever. Our condolences to Clyde Colburn, a focus of this paper in recent months. Guess we won't have Clyde to kick around anymore: it's probably a good thing too -- in recent weeks the Republicans have been quoting the SUN in a vain attempt to create an anti-freek backlash in their behalf.

Also in this issue, find out how General Motors built up the Nazi armed forces in World War II. They never said anything about THAT in history class. Another cover up: did you know that millions of "witches" burned at the stake were actually women doctors practicing herbal and psychic medicine, put to the torch by male doctors protecting their profession? That's on the centerfold. Jake the Shake tells of his life on page 19. Also to be found within: Chief Krasny's miserable track record, the fate of the new anti-rape proposal, the magic of Sun Ra and our regular movie, concert, record and other reviews.

Spring has sprung late this year, but has, it seems, now finally arrived. Celebrate at the 1974 Ann Arbor Festival of Life, Celebration of Consciousness and Spiritual Sharing, to be held April 12, 13 and 14. The event kicks off with an appearance by Allen Ginsberg and Bhagavan Das at Hill Auditorium, Friday, April 12. The following day workshops and seminars will be held in the main meadow of the Arboretum, with classes in meditation, astrology, tarot, bio-energetics, etc. Sunday April 14 will feature music, dancing, chanting and a pot luck noon feast in the main meadow. For more complete information see the Calendar.

The event with Allen Ginsberg is a benefit for the creation of a Gay Community Center in A2. Also coming up, a Gay Liberation Conference in town beginning May 3 at the University. For info write to Spring Convention Committee, 933 Brock Court, A2 48108.

People who cannot be treated at the Free People's Clinic due to overflow crowds should know they can use St. Joe's Walk-In Clinic for FREE! Just go, any weekday, 6-10 p.m., ask to be billed and then don't pay. When this clinic opened, the hospital projected that 30% of the bilis would be "uncollectable." LET'S NOT DISAPPOINT THEM! St. Joe has stated it has no intentions of pursuing unpaid bills. The Free Clinic meanwhile is sponsoring a benefit on Saturday, April 13, at East Quad's Halfway Inn, with the Milton Bonaye Dance Band and Jazz Combo. Donation is $1.00.

Now for some bad news. The Primo Showbar has closed. The story goes like this. The Primo is still owned by Merryweather, Inc., who originally opened it as Mackinac Jack's last year. Barry Allen has been managing the bar for Merryweather, while applying to the State Liquor Authority to authorize his purchase of the place. Well, last week the Liquor Commission refused to grant Barry permission to purchase, due to the financial arrears, large outstanding debts and chaotic bookkeeping of Merryweather, Inc. It seems Liquor licenses are only transferred when the new owner is deemed capable of taking over the responsibilities of the previous one. As Barry was never paid at all for managing the bar by Merryweather, he's decided to pull up. So the Primo is closed for now, it's future uncertain.

The latest issue of HERSELF newspaper can be found at newstands around town or by writing to 225 East Liberty. The issue includes features on symptomless gonorrhea, "Men Get Cured, Women Get Drugged," how to deal with Horrible Herpes, and more in an issue with "Warning: This magazine may be harmful to your doctor" inscribed on the cover ... Also out is the latest Periodical Lunch ... The SUN's printer last issue censored the nipples and pubic hairs on a drawing of a woman's body illustrating an article on the Free Clinic's new session. They said it was pornographic ... The Union Gallery is featuring a special exhibit called "Womenspace" now through April 27th, featuring local and national prints, paintings, photographs and metal work, and special events. The Gallery is inside the Michigan Union.

MUSIC NEWS: Celebrate the $5 law at the Zenta Thanksgiving Bash Saturday, April 6 at Carpenter Hall in Ypsi-Toke-EE on Michigan Avenue and Carpenter Rd. The dance features the Rockets and the Vipers. Donation $3 with all the grog you can consume ... Jim Dulzo has a once-a-week show on still mostly dormant WNRZ-FM, Monday nights starting at 9 p.m., with good jams and interviews with local and national musicians ... Commander Cody has been voted the top U.S. Country band in Billboard's International country survey. Upon hearing the news, the Commander streaked a Georgia stage while singing, "Diggy-diggy-lox ..." Bob Seger has a new LP out and it smokes ... Johnny Winter plays Cobo Hall April 8 with Brownsville Station of Ann Arbor ... Don't forget the Daystar J. Geils and Gladys Knight shows coming up April 10 and 18 ... With the closing of the Primo, the need for a People's Ballroom gets ever more acute. Watch the next SUN for news of Tribal Funding's suit to get the Ballroom money back from the Repubs.

The next SUN will feature a special section on gardening. In the meantime, Project Grow is offering free space to people who want to grow their own. Applications can be picked up at the Public Library, the YM-YWCA, the Ecology Center, Recreation Department or Bryant School ... Did you know you can recycle glass, metal and newsprint at Campus Corners? Bring your refuse in all day Tuesday or Wednesday by 12 noon each week.

Dr. Ed Pierce of the Summit St. Medical Clinic is running for Congress in the August primary ... The last session of the Rights of the Accused conference will be held Thursday, April 11 in room 120 of Hutchins Hall at 7:30pm.

We close again with the state of the SUN. First off, we still need more help, and are seeking experienced writers, photographers, and artists for cartooning or layout. Also people who lack writing experience but have story ideas should let us know about them. Be forewarned that as yet we can't pay anyone except for 2 ad salespeople, our distributors and typesetters.

Speaking of which, we'd like to urge everyone who supports the SUN and would like to see it become a permanent and eventually weekly institution to please Support Sun Advertisers. This is a straight-out hype. Supporting the businesses that advertise in this paper also keeps us alive. This time we point to the Híghtime! weed tray advertised on page 12. We can genuinely recommend this rolling tray for people who are tired of the usual metal pan borrowed from the kitchen. The Hightime! tray is attractive and useful. Also, if you're into jazz the entire Impulse catalogue is available at 40% off with the coupon ad on page 17.