Burger King Has It Their Way 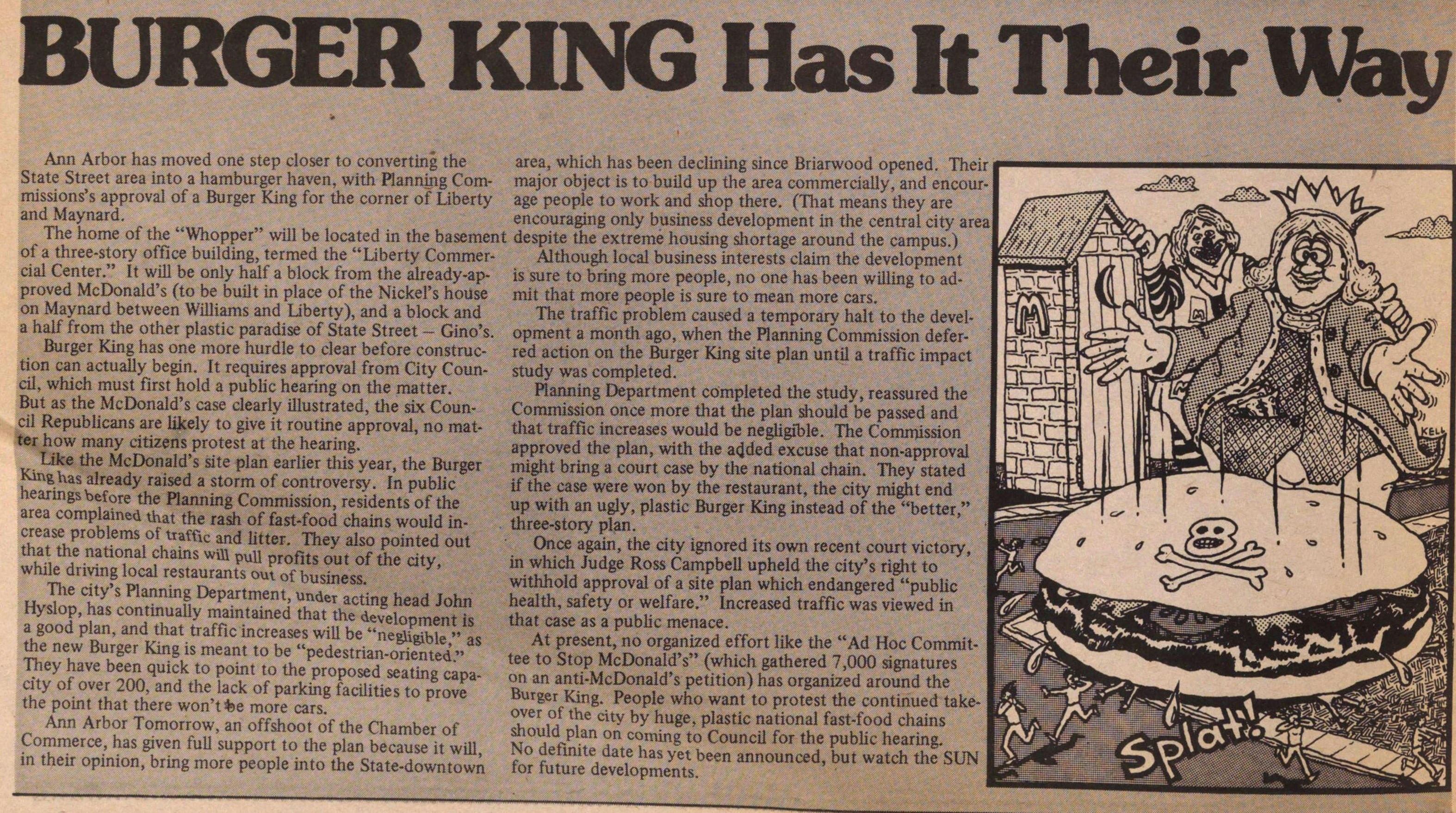 BURGER KING Has It Their Way

Ann Arbor has moved one step closer to converting the State Street area into a hamburger haven, with Planning Commissions' approval of a Burger King for the comer of Liberty and Maynard.

The home of the "Whopper" will be located in the basement of a three-story office building, termed the "Liberty Commercial Center." It will be only half a block from the already-approved McDonald's (to be built in place of the Nickel's house on Maynard between Williams and Liberty), and a block and a half from the other plastic paradise of State Street -- Gino's.

Burger King has one more hurdle to clear before construction can actually begin. It requires approval from City Council, which must first hold a public hearing on the matter. But as the McDonald's case dearly Ulustrated, the six Council Republicans are likely to give it routine approval, no matter how many citizens protest at the hearing.

Like the McDonald's site plan earlier this year, the Burger King has already raised a storm of controversy. In public hearings before the Planning Commission, residents of the area complained that the rash of fast-food chains would increase problems of traffic and litter. They also pointed out that the national chains will pull profits out of the city while driving local restaurants out of business

The city's Planning Department, under acting head John Hyslop, has continually maintained that the development is a good plan, and that traffic increases will be "negligible," as the new Burger King is meant to be "pedestrian-oriented." They have been quick to point to the proposed seating capacity of over 200, and the lack of parking facilities to prove the point that there won't be more cars.

Ann Arbor Tomorrow, an offshoot of the Chamber of Commerce, has given full support to the plan because it will in their opinion, bring more people into the State-downtown area, which has been declining since Briarwood opened. Their major object is to build up the area commercially, and encourage people to work and shop there. (That means they are encouraging only business development in the central city area despite the extreme housing shortage around the campus.)

Although local business interests claim the development is sure to bring more people, no one has been willing to admit that more people is sure to mean more cars.

The trafilc problem caused a temporary halt to the development a month ago, when the Planning Commission deferred action on the Burger King site plan until a traffic impact study was completed.

Planning Department completed the study, reassured the Commission once more that the plan should be passed and that traffic increases would be negligible. The Commission approved the plan, with the added excuse that non-approval might bring a court case by the national chain. They stated if the case were won by the restaurant, the city might end up with an ugly, plastic Burger King instead of the "better," three-story plan.

Once again, the city ignored its own recent court victory, in which Judge Ross Campbell upheld the city's right to withhold approval of a site plan which endangered "public health, safety or welfare." Increased traffic was viewed in that case as a public menace.

At present, no organized effort like the "Ad Hoc Committee to Stop McDonald's" (which gathered 7,000 signatures on an anti-McDonald's petition) has organized around the Burger King. People who want to protest the continued take-over of the city by huge, pIastic national fast-food chains should plan on coming to Council for the public hearing. No definite date has yet been announced, but watch the SUN for future developments.