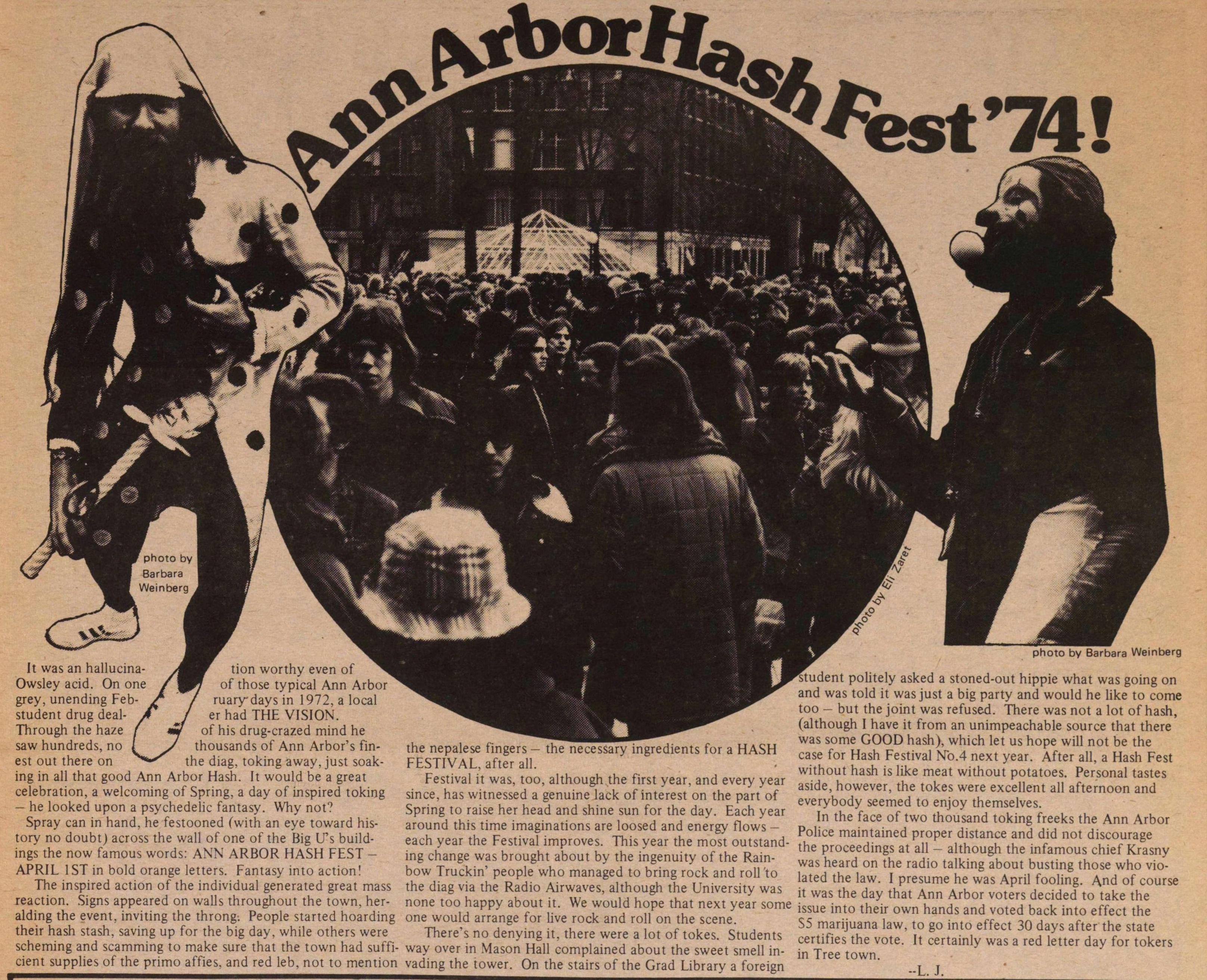 It was an hallucination worthy even of Owsley acid. On one of those typical Ann Arbor grey, unending February days in 1972, a local student drug dealer had THE VISION. Through the haze of his drug-crazed mind he saw hundreds, no thousands of Ann Arbor's finest out there on the diag, toking away, just soaking in all that good Ann Arbor Hash. It would be a great celebration, a welcoming of Spring, a day of inspired toking -- he looked upon a psychedelic fantasy. Why not?

Spray can in hand, he festooned (with an eye toward history no doubt) across the wall of one of the Big U's buildings the now famous words: ANN ARBOR HASH FEST -- APRIL 1ST in bold orange letters. Fantasy into action!

The inspired action of the individual generated great mass reaction. Signs appeared on walls throughout the town, heralding the event, inviting the throng. People started hoarding their hash stash, saving up for the big day, while others were scheming and scamming to make sure that the town had sufficient supplies of the primo affies, and red leb, not to mention the Nepalese fingers -- the necessary ingredients for a HASH FESTIVAL, after all.

Festival it was, too, although the first year, and every year since, has witnessed a genuine lack of interest on the part of Spring to raise her head and shine sun for the day. Each year around this time imaginations are loosed and energy flows -- each year the Festival improves. This year the most outstanding change was brought about by the ingenuity of the Rainbow Truckin' people who managed to bring rock and roll to the diag via the Radio Airwaves, although the University was none too happy about it. We would hope that next year some one would arrange for live rock and roll on the scene.

There's no denying it, there were a lot of tokes. Students way over in Mason Hall complained about the sweet smell invading the tower. On the stairs of the Grad Library a foreign student politely asked a stoned-out hippie what was going on and was told it was just a big party and would he like to come too -- but the joint was refused. There was not a lot of hash, (although I have it from an unimpeachable source that there was some GOOD hash), which let us hope will not be the case for Hash Festival No.4 next year. After all, a Hash Fest without hash is like meat without potatoes. Personal tastes aside, however, the tokes were excellent all afternoon and everybody seemed to enjoy themselves.

In the face of two thousand toking freeks the Ann Arbor Police maintained proper distance and did not discourage the proceedings at all -- although the infamous chief Krasny was heard on the radio talking about busting those who violated the law. I presume he was April fooling. And of course it was the day that Ann Arbor voters decided to take the issue into their own hands and voted back into effect the $5 marijuana law, to go into effect 30 days after the state certifies the vote. It certainly was a red letter day for tokers in Tree town.