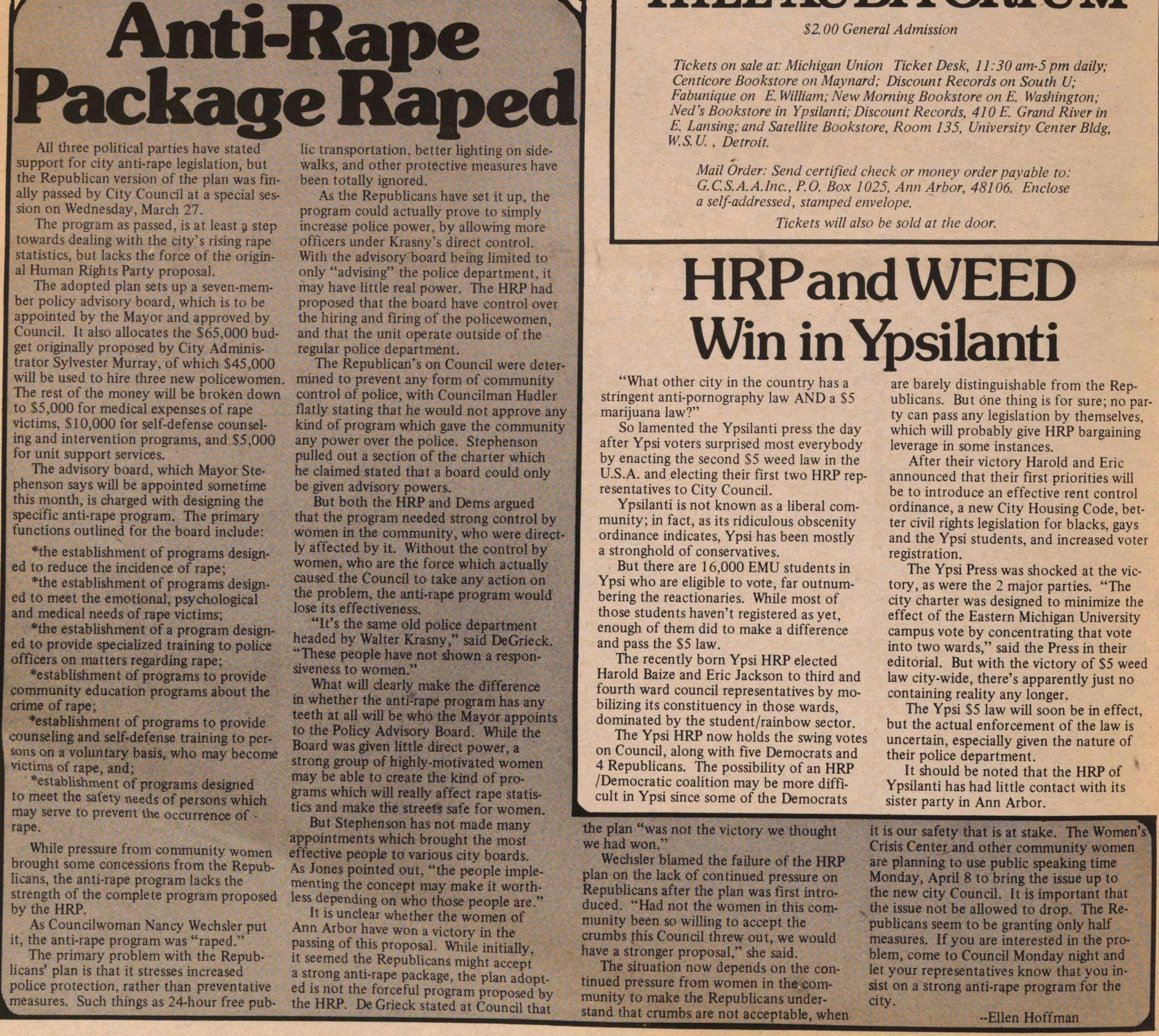 All three political parties have stated support for city anti-rape legislation, but the Republican version of the plan was finally passed by City Council at a special session on Wednesday, March 27.

The program as passed, is at least a step towards dealing with the city's rising rape statistics, but lacks the force of the original Human Rights Party proposal.

The adopted plan sets up a seven-member policy advisory board, which is to be appointed by the Mayor and approved by Council. It also allocates the $65,000 budget originally proposed by City Administrator Sylvester Murray, of which $45,000 will be used to hire three new policewomen. The rest of the money will be broken down to $5,000 for medical expenses of rape victims, $10,000 for self-defense counseling and intervention programs, and $5,000 for unit support services,

The advisory board, which Mayor Stephenson says will be appointed sometime this month, is charged with designing the specific anti-rape program. The primary functions outlined for the board include:

*the establishment of programs designed to reduce the incidence of rape;

*the establishment of programs designed to meet the emotional, psychological and medical needs of rape victims;

*the establishment of a program designed to provide specialized training to police officers on matters regarding rape;

*establishment of programs to provide community education programs about the crime of rape;

*establishment of programs to provide counseling and self-defense training to persons on a voluntary basis, who may become victims of rape, and;

*establishment of programs designed to meet the safety needs of persons which may serve to prevent the occurrence of rape.

While pressure from community women brought some concessions from the Republicans, the anti-rape program lacks the strength of the complete program proposed by the HRP.

As Councilwoman Nancy Wechsler put it, the anti-rape program was "raped."

The primary problem with the Republicans' plan is that it stresses increased police protection, rather than preventative measures. Such things as 24-hour free public transportation, better lighting on sidewalks, and other protective measures have been totally ignored.

As the Republicans have set it up, the program could actually prove to simply increase police power, by allowing more officers under Krasny's direct control. With the advisory board being limited to only "advising" the police department, it may have little real power. The HRP had proposed that the board have control over the hiring and firing of the policewomen, and that the unit operate outside of the regular police department.

The Republican's on Council were deter. mined to prevent any form of community control of police, with Councilman Hadler flatly stating that he would not approve any kind of program which gave the community any power over the police. Stephenson pulled out a section of the charter which he claimed stated that a board could only be given advisory powers.

But both the HRP and Dems argued that the program needed strong control by women in the community, who were directly affected by it. Without the control by women, who are the force which actually caused the Council to take any action on the problem, the anti-rape program would lose its effectiveness.

"It's the same old police department headed by Walter Krasny," said DeGrieck. "These people have not shown a responsiveness to women."

What will clearly make the difference in whether the anti-rape program has any teeth at all will be who the Mayor appoints to the Police Advisory Board. While the Board was given little direct power, a strong group of highly-motivated women may be able to create the kind of programs which will really affect rape statistics and make the streets safe for women.

But Stephenson has not made many appointments which brought the most effective people to various city boards. As Jones pointed out, "the people implementing the concept may make it worthless depending on who those people are."

It is unclear whether the women of Ann Arbor have won a victory in the passing of this proposal. While initially, it seemed the Republicans might accept a strong anti-rape package, the plan adopted is not the forceful program proposed by the HRP. De Grieck stated at Council that the plan "was not the victory we thought we had won."

Wechsler blamed the failure of the HRP plan on the lack of continued pressure on Republicans after the plan was first introduced. "Had not the women in this community been so willing to accept the crumbs this Council threw out, we would have a stronger proposal," she said.

The situation now depends on the continued pressure from women in the community to make the Republicans understand that crumbs are not acceptable, when it is our safety that is at stake. The Women's Crisis Center and other community women are planning to use public speaking time Monday, April 8 to bring the issue up to the new city Council. It is important that the issue not be allowed to drop. The Republicans seem to be granting only half measures. If you are interested in the problem, come to Council Monday night and let your representatives know that you insist on a strong anti-rape program for the city.