HRP and WEED Win In Ypsilanti 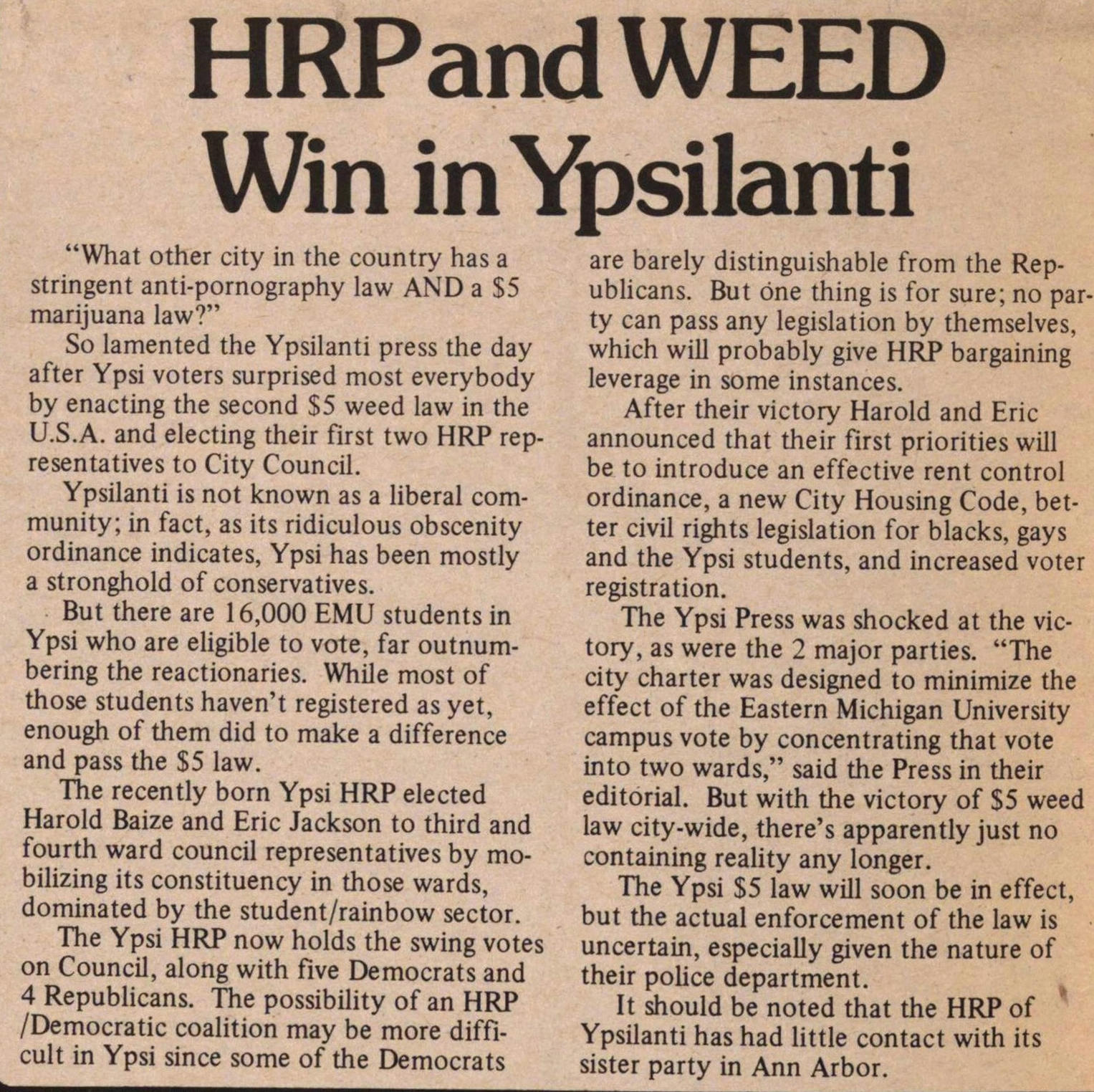 HRP and WEED Win in Ypsilanti

"What other city in the country has a stringent anti-pornography law AND a $5 marijuana law?"

So lamented the Ypsilanti press the day after Ypsi voters surprised most everybody by enacting the second $5 weed law in the U.S.A. and electing their first two HRP representatives to City Council.

Ypsilanti is not known as a liberal community; in fact, as its ridiculous obscenity ordinance indicates, Ypsi has been mostly a stronghold of conservatives.

But there are 16,000 EMU students in Ypsi who are eligible to vote, far outnumbering the reactionaries. While most of those students haven't registered as yet, enough of them did to make a difference and pass the $5 law.

The recently born Ypsi HRP elected Harold Baize and Eric Jackson to third and fourth ward council representatives by mobilizing its constituency in those wards, dominated by the student/rainbow sector.

The Ypsi HRP now holds the swing votes on Council, along with five Democrats and 4 Republicans. The possibility of an HRP Democratic coalition may be more difficult in Ypsi since some of the Democrats are barely distinguishable from the Republicans. But one thing is for sure; no party can pass any legislation by themselves, which will probably give HRP bargaining leverage in some instances.

After their victory Harold and Eric announced that their first priorities will be to introduce an effective rent control ordinance, a new City Housing Code, better civil rights legislation for blacks, gays and the Ypsi students, and increased voter registration.

The Ypsi Press was shocked at the victory, as were the 2 major parties. "The city charter was designed to minimize the effect of the Eastern Michigan University campus vote by concentrating that vote into two wards," said the Press in their editorial. But with the victory of $5 weed law city-wide, there's apparently just no containing reality any longer.

The Ypsi $5 law will soon be in effect, but the actual enforcement of the law is uncertain, especially given the nature of their police department.

It should be noted that the HRP of Ypsilanti has had little contact with its sister party in Ann Arbor.