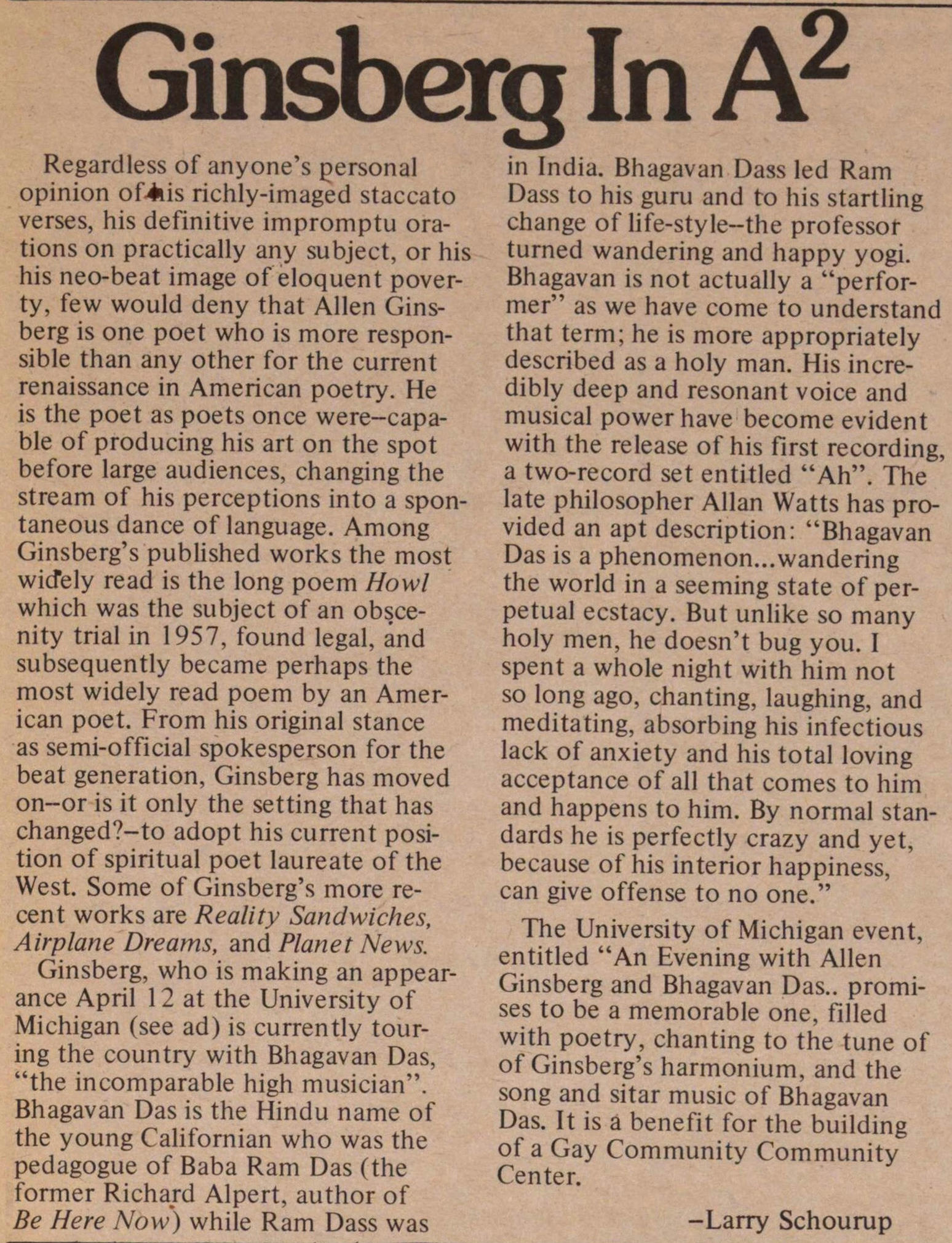 Regardless of anyone's personal opinion of his richly-imaged staccato verses, his definitive impromptu orations on practically any subject, or his his neo-beat image of eloquent poverty, few would deny that Allen Ginsberg is one poet who is more responsible than any other for the current renaissance in American poetry. He is the poet as poets once were -- capable of producing his art on the spot before large audiences, changing the stream of his perceptions into a spontaneous dance of language. Among Ginsberg's published works the most widely read is the long poem Howl which was the subject of an obscenity trial in 1957, found legal, and subsequently became perhaps the most widely read poem by an American poet. From his original stance as semi-official spokesperson for the beat generation, Ginsberg has moved on -- or is it only the setting that has changed? -- to adopt his current position of spiritual poet laureate of the West. Some of Ginsberg's more recent works are Reality Sandwiches, Airplane Dreams, and Planet News.

Ginsberg, who is making an appearance April 12 at the University of Michigan (see ad) is currently touring the country with Bhagavan Das, "the incomparable high musician". Bhagavan Das is the Hindu name of the young Californian who was the pedagogue of Baba Ram Dass (the former Richard Alpert, author of Be Here Now) while Ram Dass was in India. Bhagavan Das led Ram Dass to his guru and to his startling change of life-style -- the professor turned wandering and happy yogi. Bhagavan is not actually a "performer" as we have come to understand that term; he is more appropriately described as a holy man. His incredibly deep and resonant voice and musical power have become evident with the release of his first recording, a two-record set entitled "Ah". The late philosopher Allan Watts has provided an apt description: "Bhagavan Das is a phenomenon ... wandering the world in a seeming state of perpetual ecstasy. But unlike so many holy men, he doesn't bug you. I spent a whole night with him not so long ago, chanting, laughing, and meditating, absorbing his infectious lack of anxiety and his total loving acceptance of all that comes to him and happens to him. By normal standards he is perfectly crazy and yet, because of his interior happiness, can give offense to no one."

The University of Michigan event, entitled "An Evening with Allen Ginsberg and Bhagavan Das," promises to be a memorable one, filled with poetry, chanting to the tune of of Ginsberg's harmonium, and the song and sitar music of Bhagavan Das. It is a benefit for the building of a Gay Community Community Center.