Women In The Media 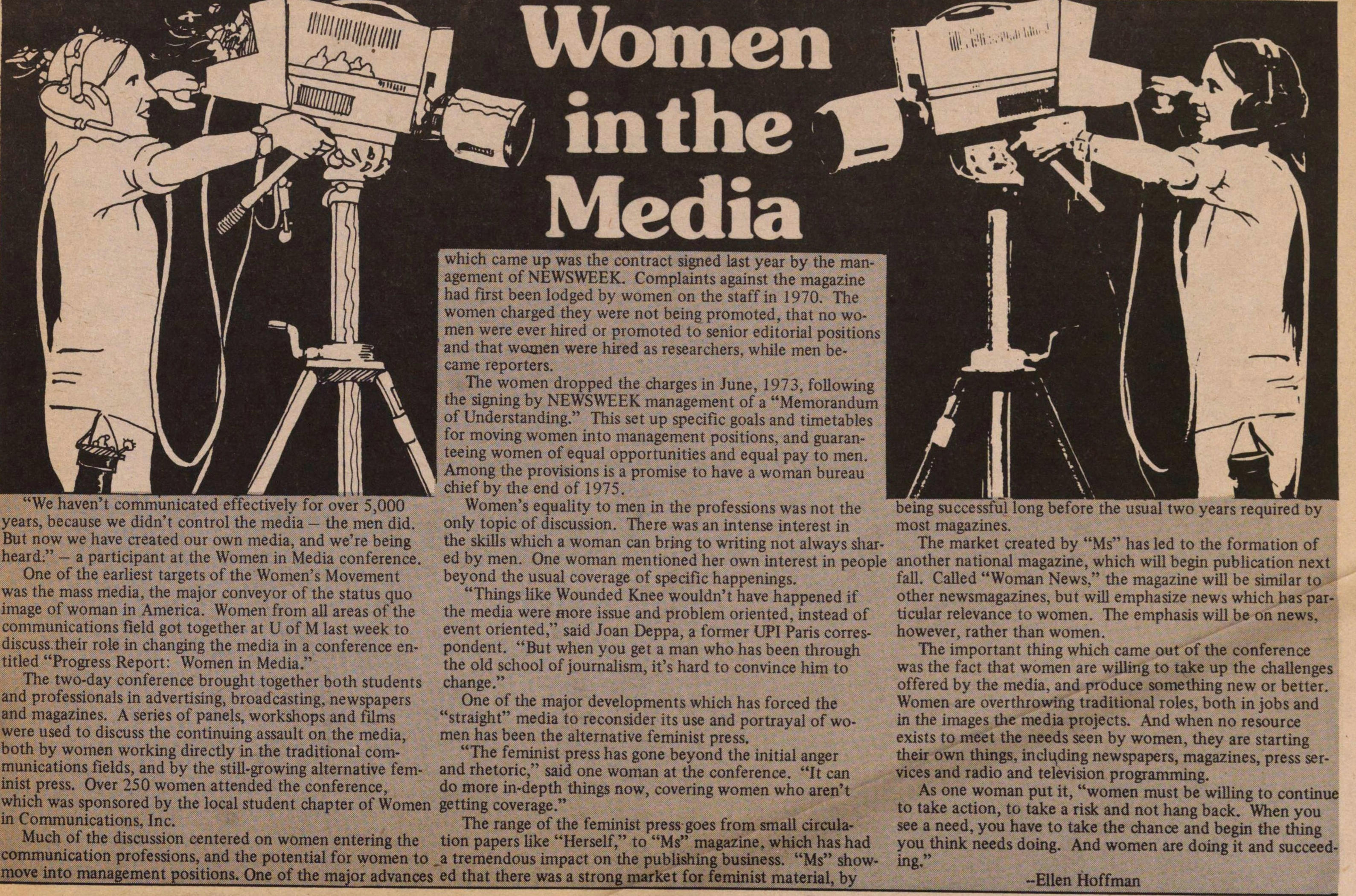 Women in the Media

"We haven t communicated effectively for over 5,000 years, because we didn't control the media -- the men did. But now we have created our own media, and we're being heard." -- a participant at the Women in Media conference.

One of the earliest targets of the Women's Movement was the mass media, the major conveyor of the status quo image of woman in America. Women from all areas of the Communications field got together at U of M last week to discuss their role in changing the media in a conference entitled "Progress Report: Women in Media."

The two-day conference brought together both students and professionals in advertising, broadcasting, newspapers and magazines. A series of panels, workshops and films were used to discuss the continuing assault on the media, both by women working directly in the traditional communications fields, and by the still-growing alternative feminist press. Over 250 women attended the conference, which was sponsored by the local student chapter of Women in Communications, Inc.

Much of the discussion centered on women entering the communication professions, and the potential for women to move into management positions. One of the major advances which came up was the contract signed last year by the management of NEWSWEEK. Complaints against the magazine had first been lodged by women on the staff in 1970. The women charged they were not being promoted, that no women were ever hired or promoted to senior editorial positions and that women were hired as researchers, while men became reporters.

The women dropped the charges in June, 1973, following the signing by NEWSWEEK management of a "Memorandum of Understanding." This set up specific goals and timetables for moving women into management positions, and guaranteeing women of equal opportunities and equal pay to men. Among the provisions is a promise to have a woman bureau chief by the end of 1975.

Women's equality to men in the professions was not the only topic of discussion. There was an intense interest in the skills which a woman can bring to writing not always shared by men. One woman mentioned her own interest in people beyond the usual coverage of specific happenings.

"Things like Wounded Knee wouldn't have happened if the media were more issue and problem oriented, instead of event oriented," said Joan Deppa, a former UPI Paris correspondent. "But when you get a man who has been through the old school of journalism, it's hard to convince him to change."

One of the major developments which has forced the "straight" media to reconsider its use and portrayal of women has been the alternative feminist press,

"The feminist press has gone beyond the initial anger and rhetoric," said one woman at the conference. "It can do more in-depth things now, covering women who aren't getting coverage."

The range of the feminist press goes from small circulation papers like "Herself," to "Ms" magazine, which has had a tremendous impact on the publishing business. "Ms" showed that there was a strong market for feminist material, by being successful long before the usual two years required by most magazines.

The market created by "Ms" has led to the formation of another national magazine, which will begin publication next fall. Called "Woman News," the magazine will be similar to other newsmagazines, but will emphasize news which has particular relevance to women. The emphasis will be on news, however, rather than women.

The important thing which came out of the conference was the fact that women are willing to take up the challenges offered by the media, and produce something new or better. Women are overthrowing traditional roles, both in jobs and in the images the media projects. And when no resource exists to meet the needs seen by women, they are starting their own things, including newspapers, magazines, press services and radio and television programming.

As one woman put it, "women must be willing to continue to take action, to take a risk and not hang back. When you see a need, you have to take the chance and begin the thing you think needs doing. And women are doing it and succeeding."