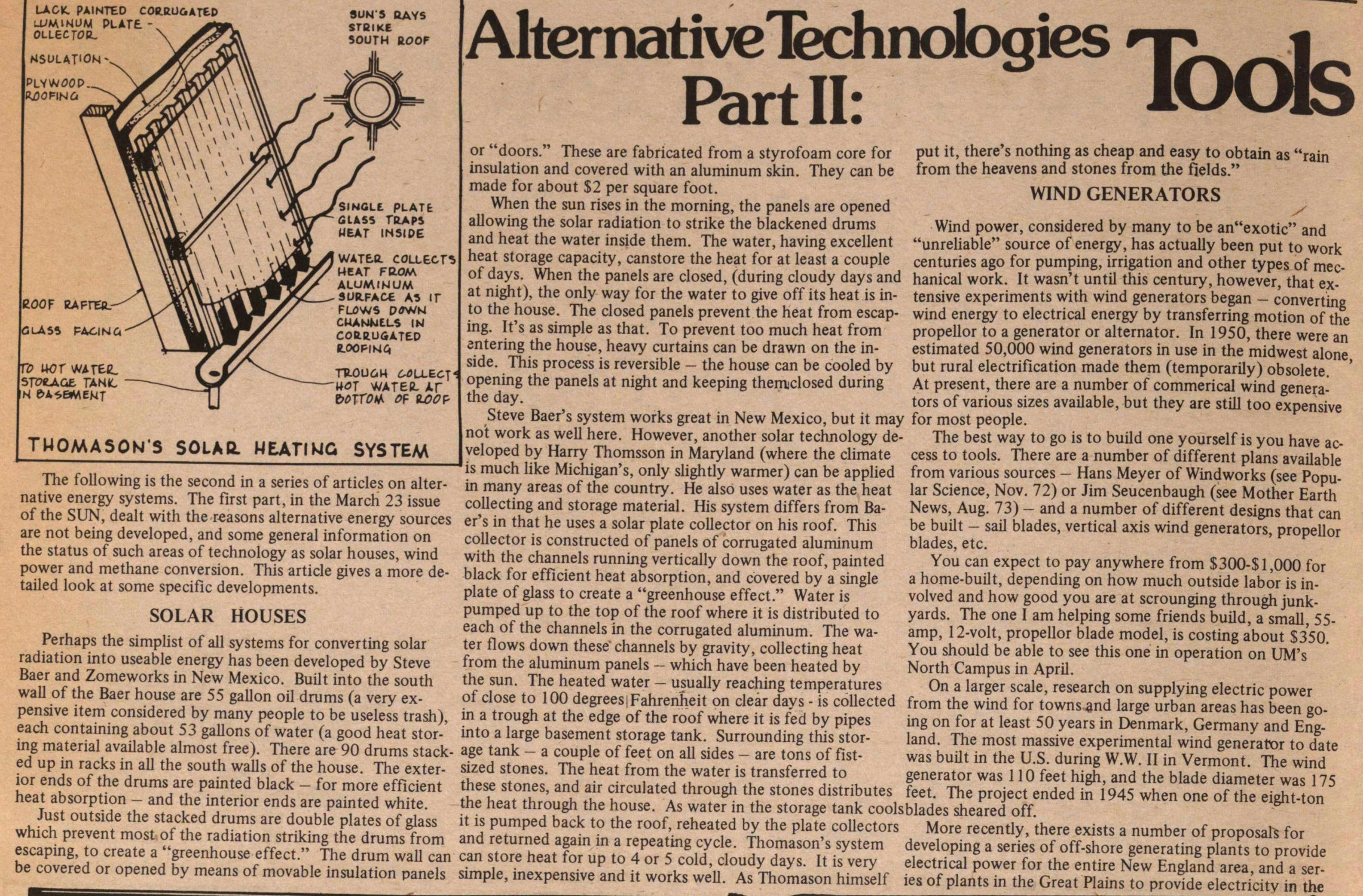 The following is the second in a series of articles on alternative energy systems. The first part, in the March 23 issue of the SUN, dealt with the reasons alternative energy sources are not being developed, and some general information on the status of such areas of technology as solar houses, wind power, and methane conversion. This article gives a more detailed look at some specific developments.

Perhaps the simplest of all systems for converting solar radiation into useable energy has been developed by Steve Baer and Zomeworks in New Mexico. Built into the south wall of the Baer house are 55 gallon oil drums (a very expensive item considered by many people to be useless trash) each containing about 53 gallons of water (a good heat-storing material available almost free). There are 90 drums stacked up in racks in all the south walls of the house. The exterior ends of the drums are painted black - for more efficient heat absorption - and the interior ends are painted white.

Just outside the stacked drums are double plates of glass which prevent most of the radiation striking the drums from escaping, to create a "greenhouse effect." The drum wall can be covered or opened by means of movable insulation panels or "doors." These are fabricated from a styrofoam core for insulation and covered with an aluminum skin. They can be made for about $2 per square foot.

When the sun rises in the morning, the panels are opened allowing the solar radiation to strike the blackened drums and heat the water inside them. The water, having excellent heat storage capacity, can store the heat for at least a couple of days. When the panels are closed, (during cloudy days and at night), the only way for the water to give off its heat is into the house. The closed panels prevent the heat from escaping. It's as simple as that. To prevent too much heat from entering the house, heavy curtains can be drawn on the inside. This process is reversible - the house can be cooled by opening the panels at night and keeping them closed during the day.

Steve Baer's system works great in New Mexico, but it may not work as well here. However, another solar technology developed by Harry Thomsson in Maryland (where the climate is much like Michigan's, only slightly warmer) can be applied in many areas of the country. He also uses water as the heat collecting and storage material. His system differs from Baer's in that he uses a solar plate collector on his roof. This collector is constructed of panels of corrugated aluminum with the channels running vertically down the roof, painted black for efficient heat absorption, and covered by a single plate of glass to create a "greenhouse effect." Water is pumped up to the top of the roof where it is distributed to each of the channels in the corrugated aluminum. The water flows down these channels by gravity, collecting heat from the aluminum panels - which have been heated by the sun. The heated water - usually reaching temperatures of close to 100 degrees Fahrenheit on clear days - is collected in a trough at the edge of the roof where it is fed by pipes into a large basement storage tank. Surrounding this storage tank - a couple of feet on all sides - are tons of fïstsized stones. The heat from the water is transferred to these stones, and air circulated through the stones distributes the heat through the house. As water in the storage tank cools it is pumped back to the roof, reheated by the plate collectors, and returned again in a repeating cycle. Thomsson's system can store heat for up to 4 or 5 cold, cloudy days. It is very simple, inexpensive and it works well. As Thomsson himself put it, there's nothing as cheap and easy to obtain as "rain from the heavens and stones from the fields."

Wind power, considered by many to be an"exotic" and "unreliable" source of energy, has actually been put to work centuries ago for pumping, irrigation, and other types of mechanical work. It wasn't until this century, however, that extensive experiments with wind generators began - converting wind energy to electrical energy by transferring motion of the propellor to a generator or alternator. In 1950, there were an estimated 50,000 wind generators in use in the midwest alone but rural electrification made them (temporarily) obsolete. At present, there are a number of commercial wind generators of various sizes available, but they are still too expensive for most people.

The best way to go is to build one yourself is you have access to tools. There are a number of different plans available from various sources - Hans Meyer of Windworks (see Popular Science, Nov. 72) or Jim Seucenbaugh (see Mother Earth News, Aug. 73) - and a number of different designs that can be built - sail blades, vertical axis wind generators, propellor blades, etc.

You can expect to pay anywhere from $300-$1,000 for a home-built, depending on how much outside labor is involved and how good you are at scrounging through junkyards. The one I am helping some friends buüd, a small, 55 amp, 12-volt, propellor blade model, is costing about $350. You should be able to see this one in operation on UM's North Campus in April. On a larger scale, research on supplying electric power from the wind for towns and large urban areas has been going on for at least 50 years in Denmark, Germany, and England. The most massive experimental wind generator to date was built in the U.S. during W.W. II in Vermont. The wind generator was 110 feet high, and the blade diameter was 175 feet. The project ended in 1945 when one of the eight-ton blades sheared off. More recently, there exists a number of proposals for developing a series of off-shore generating plants to provide electrical power for the entire New England area, and a series of plants in the Great Plains to provide electricity in the