Africa: The Next Viet Nam? 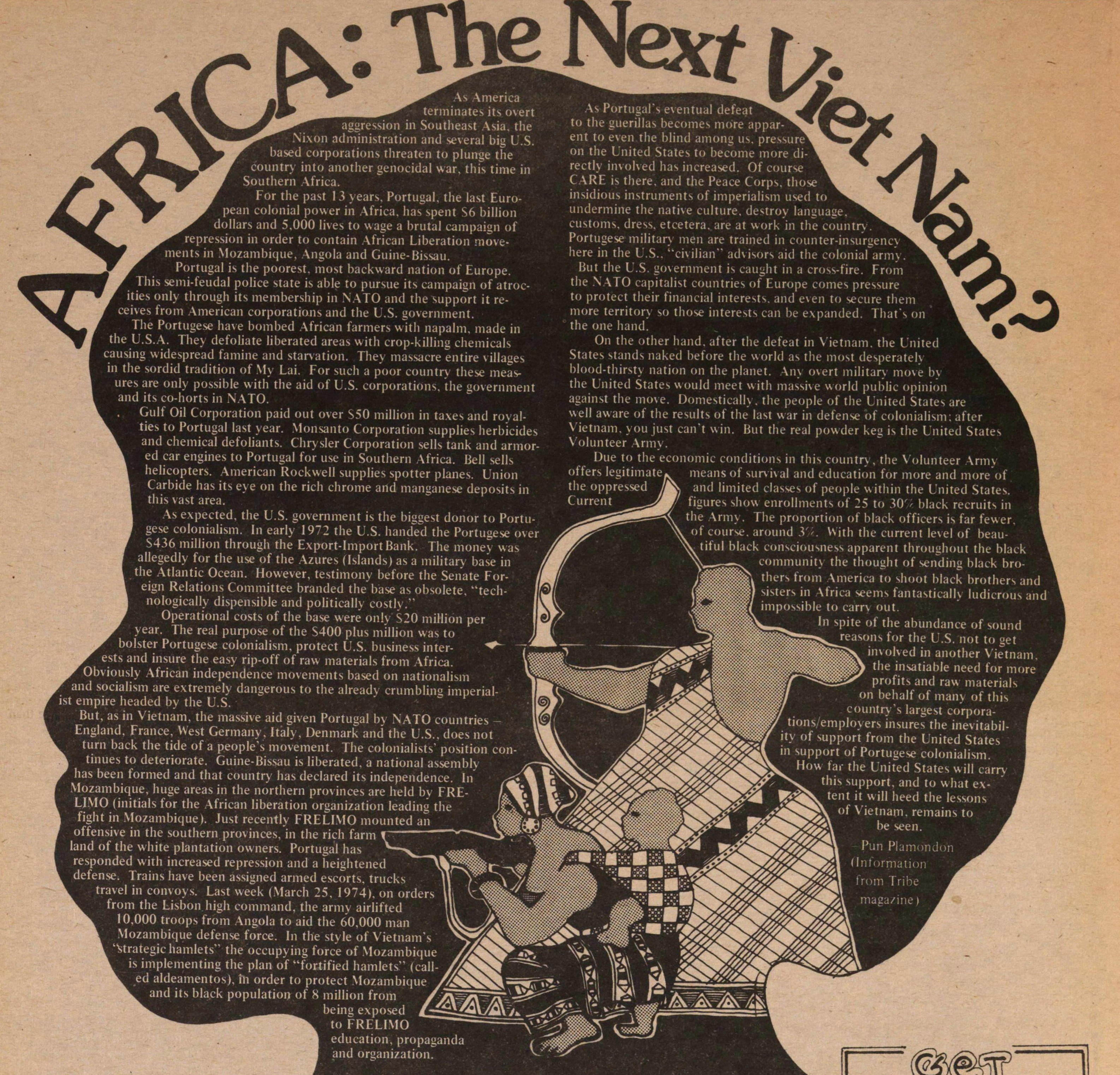 As America terminates its aggression in Southeast Asia, the Nixon administration and several big U.S. based corporations threaten to plunge the country in another genocidal war, this time in Southern Africa.

For the last 13 years, Portugal, the last European colonial power in Africa, has spent 6 million dollars and 5,000 lives to wage a brutal campaign of repression in order to contain African Liberation movements in Mozambique, Angola and Guine-Bissau.

Portugal is the poorest and most backward nation of Europe.

This semi-feudal police state is able to pursue its campaign of atrocities from American corporations and the U.S. Government.

The Portuguese have bombed African farmers with napalm made in the U.S. A. They defoliate liberated areas with crop-killing chemicals causing widespread famine. They massacre entire villages in the sordid tradition of My Lai. For such a poor country, these measures are only possible with the aid of U.S. Corporations, the government, and its cohorts in NATO.

As expected, the U.S. government is the biggest donor to Portuguese colonialism. In 1972, the U.S. handed the Portuguese over $436 million through the Export-Import bank. The money was allegedly for the use of the Azures (Islands) as a military base in the Atlantic Ocean. However, testimony before the Foreign Relations Committee branded the base as "obsolete "technologically dispensable and politically costly."

Operational costs of the base were only $20 million per year. The real purpose of the $400 plus million was to bolster Portuguese colonialism, protect U.S. business interests, and insure the easy rip-off of raw materials from Africa. Obviously African independence movements based on nationalism and socialism are extremely dangerous to the already crumbling imperialist empire headed by the U.S.

But, as in Viet Nam the massive aid given Portugal by NATO countries- England, France, West Germany, Italy, Denmark, and the U.S. does not turn back the tide of a people's movement. The colonialists' position continues to deteriorate. Guine-Bissau is liberated, a national assembly has been formed and the country has declared its independence. In Mozambique, huge areas of the northern provinces are held by FRELIMO (initials of the African liberation organization leading the fight in Mozambique). Just recently, FRELIMO mounted an offensive in the southern provinces, in the rich farm land of the white plantation owners. Portugal has responded with increased repression and a heightened defense. Trains have been assigned escorts, trucks travel in convoys. Last week, (March 25, 1974) on orders from the Lisbon high command, the army air-lifted 10,000 troops from Angola to aid the 60,000 Mozambique defense force. In the style of Vietnam's "strategic hamlets," the occupying force of Mozambique is implementing the plan of "fortified hamlets"(called aldeamentos) in order to protect Mozambique and its black population of 8 million from being exposed to FRELIMO education, propaganda, and organization.

As Portugal's eventual defeat to the guerillas becomes more apparent to even the blind among us, pressure on the United States to become more directly involved has increased. Of course, CARE is there, and the Peace Corps, those insidious instruments of imperialism used to undermine the native culture, language, customs, dress, etcetera, are at work in the country. Portuguese military men are trained in counter-insurgency here in the U.S. "civilian" advisors aid the colonial army.

But the U.S. government is caught in a cross-fire. From the NATO-capitalist counties of Europe comes pressure to protect their financial interests, and even to secure them more territory so those interests can be expanded. That's on the one hand.

On the other hand, after the defeat in Vietnam, the United States stands naked before the world as the most blood-thirsty nation on the planet. Any overt military move by the United States would meet with massive world public opinion against the move. Domestically, the people of the United States are well aware of the results of the last war in defense of colonialism after Vietnam, you just can't win. But the real powder-keg is the United States Volunteer Army.

Due to the economic conditions in this country, the volunteer army offers legitimate means of survival and education for more and more of the oppressed and limited class of people within the United States. Current figures show enrollment of 25-30% black residents in the army. The proportion of black officers is far fewer, of course, about 3%. With the current level of beautiful black consciousness apparent throughout the black community, the thought of sending black brothers from America to shoot black brothers and sisters in Africa seems fantastically ludicrous and impossible to carry out.

In spite of the abundance of sound reasons for the U.S. not to get involved in another Vietnam, the insatiable need for more profits and raw materials on behalf of many of this countries large corporations/employers ensures the inevitability of support from the United States in support of Portuguese colonialism. How far the United States will carry this support and to what extent it will heed the lessons of Vietnam remains to be seen.