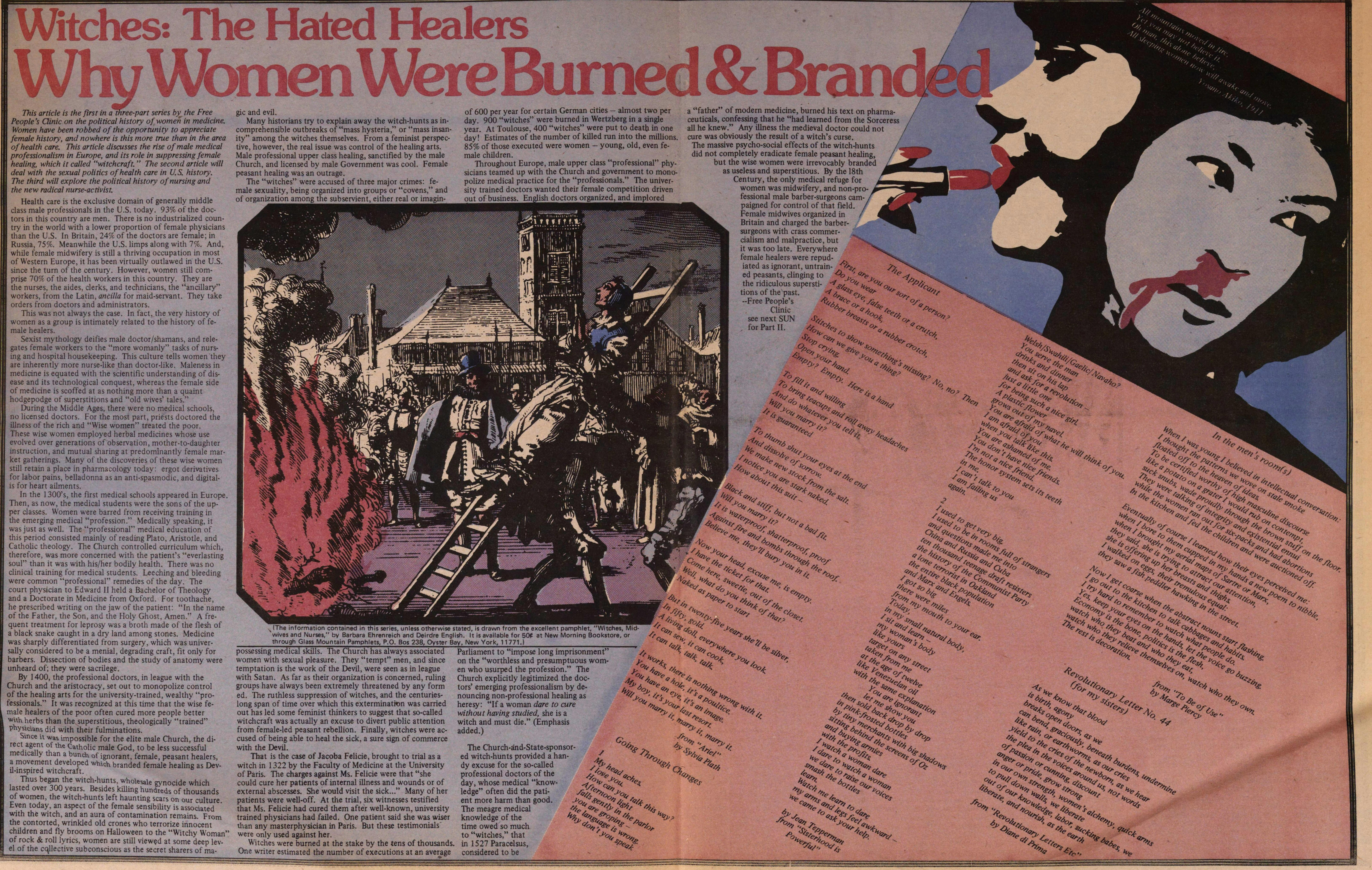 This article is the first in a three-part series by the Free People's Clinic on the political history of women in medicine. Women have been robbed of the opportunity to appreciate female history, and nowhere is this more true than in the area of health care. This article discusses the rise of male medical professionalism in Europe, and its role in suppressing female healing, which it called "witchcraft." The second article will deal with the sexual politics of health care in U.S. history. The third will explore the political history of nursing and the new radical nurse-activist.

Health care is the exclusive domain of generally middle class male professionals in the U.S. today. 93% of the doctors in this country are men. There is no industrialized country in the world with a lower proportion of female physicians than the U.S. In Britain, 24% of the doctors are female; in Russia, 75%. Meanwhile the U.S. limps along with 7%. And, while female midwifery is still a thriving occupation in most of Western Europe, it has been virtually outlawed in the U.S. since the turn of the century. However, women still comprise 70% of the health workers in this country. They are the nurses, the aides, clerks, and technicians, the "ancillary" workers, from the Latin, ancilla for maid-servant. They take orders from doctors and administrators.

This was not always the case. In fact, the very history of women as a group is intimately related to the history of female healers.

Sexist mythology deifies male doctor/shamans, and relegates female workers to the "more womanly" tasks of nursing and hospital housekeeping. This culture tells women they are inherently more nurse-like than doctor-like. Maleness in medicine is equated with the scientific understanding of disease and its technological conquest, whereas the female side of medicine is scoffed at as nothing more than a quaint hodgepodge of superstitions and "old wives' tales."

During the Middle Ages, there were no medical schools, no licensed doctors. For the most part, priests doctored the illness of the rich and "Wise women" treated the poor. These wise women employed herbal medicines whose use evolved over generations of observation, mother-to-daughter instruction, and mutual sharing at predominantly female market gatherings. Many of the discoveries of these wise women still retain a place in pharmacology today: ergot derivatives for labor pains, belladonna as an anti-spasmodic, and digitalis for heart ailments.

In the 1300's, the first medical schools appeared in Europe. Then, as now, the medical students were the sons of the upper classes. Women were barred from receiving training in the emerging medical "profession." Medically speaking, it was just as well. The "professional" medical education of this period consisted mainly of reading Plato, Aristotle, and Catholic theology. The Church controlled curriculum which, therefore, was more concerned with the patient's "everlasting soul" than it was with his/her bodily health. There was no clinical training for medical students. Leeching and bleeding were common "professional" remedies of the day. The court physician to Edward II held a Bachelor of Theology and a Doctorate in Medicine from Oxford. For toothache, he prescribed writing on the jaw of the patient: "In the name of the Father, the Son, and the Holy Ghost, Amen." A frequent treatment for leprosy was a broth made of the flesh of a black snake caught in a dry land among stones. Medicine was sharply differentiated from surgery, which was universally considered to be a menial, degrading craft, fit only for barbers. Dissection of bodies and the study of anatomy were unheard of; they were sacrilege.

By 1400, the professional doctors, in league with the Church and the aristocracy, set out to monopolize control of the healing arts for the university-trained, wealthy "professionals." It was recognized at this time that the wise female healers of the poor often cured more people better with herbs than the superstitious, theologically "trained" physicians did with their fulminations.

Since it was impossible for the elite male Church, the direct agent of the Catholic male God, to be less successful medically than a bunch of ignorant, female, peasant healers, a movement developed which branded female healing as Devil-inspired witchcraft.

Thus began the witch-hunts, wholesale gynocide which lasted over 300 years. Besides killing hundreds of thousands of women, the witch-hunts left haunting scars on our culture Even today, an aspect of the female sensibility is associated with the witch. and an aura of contamination remains. From the contorted, wrinkled old crones who terrorize innocent children and fly brooms on Halloween to the "Witchy Woman" of rock & roll lyrics, women are still viewed at some deep level of the collective subconscious as the secret sharers of magic and evil.

Many historians try to explain away the witch-hunts as incomprehensible outbreaks of "mass hysteria," or "mass insanity" among the witches themselves. From a feminist perspective, however, the real issue was control of the healing arts. Male professional upper class healing, sanctified by the male Church, and licensed by male Government was cool. Female peasant healing was an outrage.

The "witches" were accused of three major crimes: female sexuality, being organized into groups or "covens," and of organization among the subservient, either real or imagin- possessing medical skills. The Church has always associated women with sexual pleasure. They "tempt" men, and since temptation is the work of the Devil, were seen as in league with Satan. As far as their organization is concerned, ruling groups have always been extremely threatened by any form ed. The ruthless suppression of witches, and the centuries-long span of time over which this extermination was carried out has led some feminist thinkers to suggest that so-called witchcraft was actually an excuse to divert public attention from female-led peasant rebellion. Finally, witches were accused of being able to heal the sick, a sure sign of commerce with the Devil.

That is the case of Jacoba Felicie, brought to trial as a witch in 1322 by the Faculty of Medicine at the University of Paris. The charges against Ms. Felicie were that "she could cure her patients of internal illness and wounds or of external abscesses. She would visit the sick..." Many of her patients were well-off. At the trial, six witnesses testified that Ms. Felicie had cured them after well-known, university trained physicians had failed. One patient said she was wiser than any masterphysician in Paris. But these testimonials were only used against her.

Witches were burned at the stake by the tens of thousands. One writer estimated the number of executions at an average of 600 per year for certain German cities - almost two per day. 900 "witches" were burned in Wertzberg in a single year. At Toulouse, 400 "witches" were put to death in one day! Estimates of the number of killed run into the millions. 85% of those executed were women - young, old, even female children.

Throughout Europe, male upper class "professional" physicians teamed up with the Church and government to monopolize medical practice for the "professionals." The university trained doctors wanted their female competition driven out of business. English doctors organized, and implored Parliament to "impose long imprisonment" on the "worthless and presumptuous women who usurped the profession." The Church explicitly legitimized the doctors' emerging professionalism by denouncing non-professional healing as heresy : "If a woman dare to cure without having studied, she is a witch and must die." (Emphasis added.)

The Church-and-State-sponsored witch-hunts provided a handy excuse for the so-called professional doctors of the day, whose medical ledge often did the patient more harm than good. The meagre medical knowledge of the time owed so much to "witches," that in 1527 Paracelsus, considered to be a "father" of modern medicine, burned his text on pharmaceuticals, confessing that he "had learned from the Sorceress all he knew." Any illness the medieval doctor could not cure was obviously the result of a witch's curse.

The massive psycho-social effects of the witch-hunts did not completely eradicate female peasant healing, but the wise women were irrevocably branded - as useless and superstitious. By the 18th Century, the only medical refuge for women was midwifery, and and non-professional male barber-surgeons campaigned for control of that field. Female midwives organized in Britain and charged the barber-surgeons with crass commercialism and malpractice, but it was too late. Everywhere female healers were repudiated as ignorant, untrained peasants, clinging to the ridiculous superstitions of the past.

(The information contained in this series, unless otherwise stated, is drawn from the excellent pamphlet, "Witches, Midwives and Nurses," by Barbara Ehrenreich and Deirdre English. It s available for 50¢ at New Morning Bookstore, or through Glass Mountain Pamphlets, P.O. Bos 238, Oyster Bay, New York, 11771.)