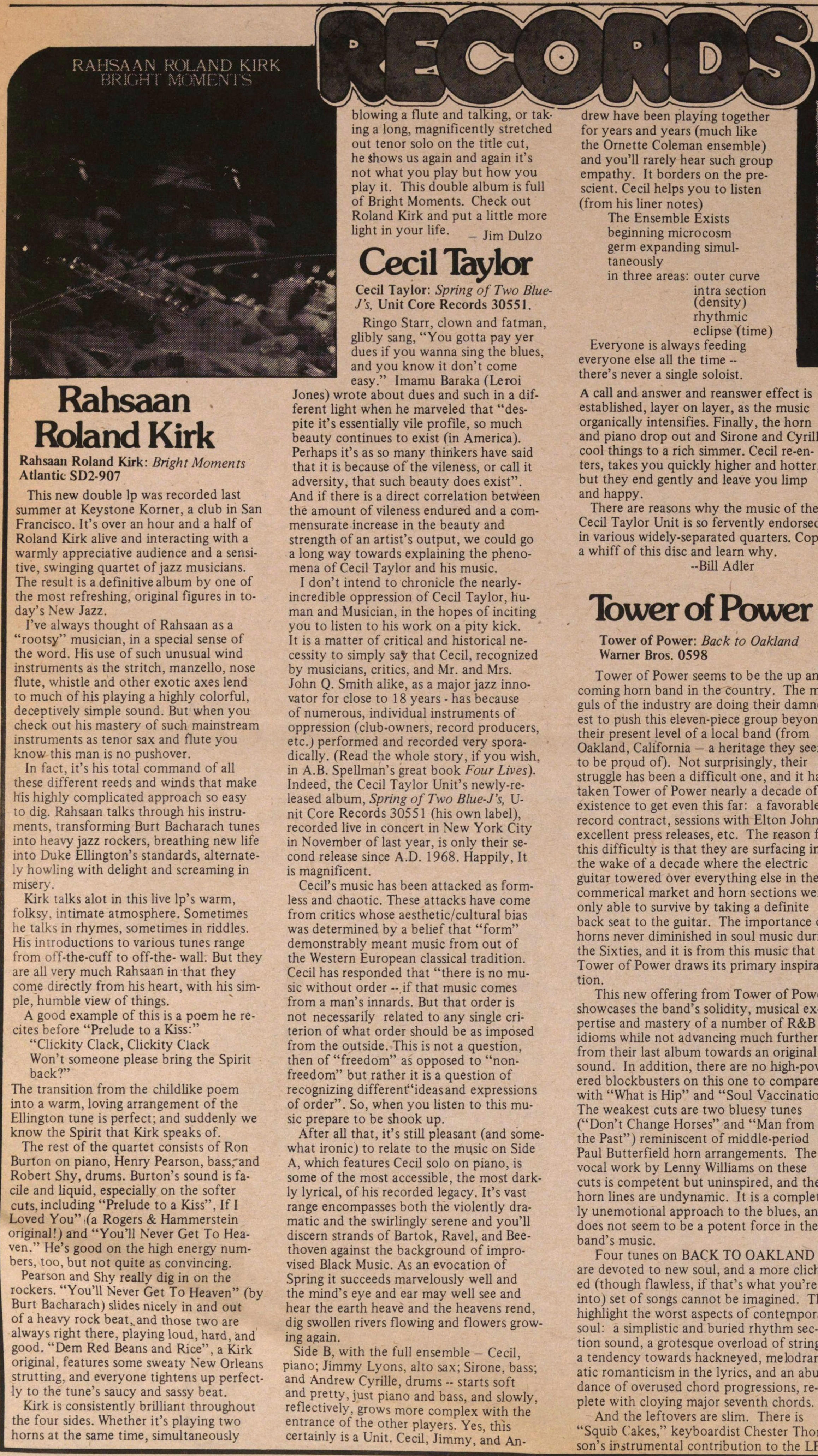 This new double lp was recorded last summer at Keystone Korner, a club in San Francisco. It's over an hour and a half of Roland Kirk alive and interacting with a warmly appreciative audience and a sensitive, swinging quartet of jazz musicians. The result is a definitive album by one of the most refreshing, original figures in today's New Jazz.

I've always thought of Rahsaan as a "rootsy" musician, in a special sense of the word. His use of such unusual wind instruments as the stritch, manzello, nose flute, whistle and other exotic axes lend to much of his playing a highly colorful, deceptively simple sound. But when you check out his mastery of such mainstream instruments as tenor sax and flute you know this man is no pushover.

In fact, it's his total command of all these different reeds and winds that make his highly complicated approach so easy to dig. Rahsaan talks through his instruments. transforming Burt Bacharach tunes into heavy jazz rockers, breathing new life into Duke Ellington's standards, alternately howling with delight and screaming in misery.

Kirk talks alot in this live lp's warm, folksy, intimate atmosphere. Sometimes he talks in rhymes, sometimes in riddles. His introductions to various tunes range from off-the-cuff to off-the-wall. But they are all very much Rahsaan in that they come directly from his heart, with his simple, humble view of things.

A good example of this is a poem he recites before "Prelude to a Kiss:"

The transition from the childlike poem into a warm, loving arrangement of the Ellington tune is perfect; and suddenly we know the Spirit that Kirk speaks of.

The rest of the quartet consists of Ron Burton on piano, Henry Pearson, bass, and Robert Shy, drums. Burton's sound is facile and liquid, especially on the softer cuts, including "Prelude to a Kiss", If I Loved You" fa Rogers & Hammerstein original!; and "You'll Never Get To Heaven." He's good on the high energy numbers, too, but not quite as convincing.

Pearson and Shy really dig in on the rockers. "You'll Never Get To Heaven" (by Burt Bacharach) slides nicely in and out Iot a heavy rock beat,. and those two are always right there, playing loud, hard, and good. "Dem Red Beans and Rice", a Kirk original, features some sweaty New Orleans strutting, and everyone tightens up perfectly to the tune's saucy and sassy beat.

Kirk is consistently brilliant throughout the four sides. Whether it's playing two horns at the same time, simultaneously blowing a flute and talking, or taking along, magnificently stretched out tenor solo on the title cut, he shows us again and again it's not what you play but how you play it. This double album is full of Bright Moments. Check out Roland Kirk and put a little more light in your life.